Whatever else you want to say about him, no one could ever accuse Italian journalist Gianluigi Nuzzi of not having great instincts for when to release a book.

In 2012 and again in 2015, Nuzzi brought out blockbuster titles based on leaked Vatican documents, exposing alleged cover-ups and corruption. He’s now back in the game with a new title called “Last Judgment,” and once again his timing is impeccable, capitalizing on not one but two Vatican scandals.

He first involves the firing of the Vatican’s longtime security czar, an Italian layman named Domenico Giani, who has a background in the Italian secret service, over the unauthorized divulgation of reports on an internal investigation related to a suspect financial transaction that led to the suspension of five Vatican employees.

The second pivots on that transaction itself, which initially involved the Vatican’s Secretariat of State paying $220 million to acquire a share of a former Harrod’s warehouse in London’s swanky Chelsea district slated to be turned into luxury apartments.

Later, when the Secretariat of State soured on the Italian financier who brokered the deal, Raffaele Mincione, it wanted a loan from the Vatican bank to spend an extra $165 million to buy the remaining shares of the property.

That money, by the way, reportedly came out of the proceeds of the annual “Peter’s Pence” collection, which is marketed to Catholics around the world as a way to support the pope’s charitable activities. Presumably, the rank and file might feel differently about giving if their donations are instead being used to play the real estate market.

The second scandal even comes with a purported bad guy straight out of Hollywood central casting: Italian Cardinal Angelo Becciu, the former No. 2 official at the Secretariat of State and today the prefect of the Vatican’s Congregation for the Causes of Saints.

Even though Becciu was gone by the time the loan request to buy out the property was made, by that time, the new “substitute” in the Secretariat of State was Venezuelan Archbishop Edgar Peña Parra, nominated to the role by Pope Francis in August 2018.

Becciu has still been left holding the bag, styled as a creature of an old guard in contrast to the “clean hands” reputation of his former boss, Italian Cardinal Pietro Parolin, the secretary of state.

Parolin has referred to the London affair as “opaque” and in need of being exposed to the light, triggering a rare public spat with Becciu, who insisted in an interview with Agenzia Nazionale Stampa Associata (ANSA) that there was nothing at all opaque about the deal.

It was standard practice, Becciu said, pointing out that the Vatican has been investing in London properties since the era of Pope Pius XII, and also claiming that Peter’s Pence isn’t designed exclusively for charity but also to support the pope’s “pastoral ministry” in a more general sense. 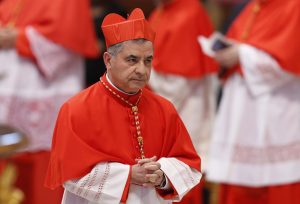 Cardinal Angelo Becciu, prefect of the Congregation for Saints' Causes, after being made a cardinal by Pope Francis during a consistory in St. Peter's Basilica at the Vatican June 28, 2018. Becciu rejected accusations that he "played and tampered with the money of the poor" after private documents about a property deal involving the Vatican leaked to the press. (CNS photo/Paul Haring)

In sifting through the details of the case, at least three questions suggest themselves.

First, the timing is curious, given that the Vatican sometime in 2020 will face its next review by Moneyval, the Council of Europe’s anti-money laundering agency. Moneyval has already signaled that this time around, it’s not so much interested in reading the new laws that have been promulgated to fight financial crime as in seeing those laws enforced.

Given that one of the five people suspended in the London probe is the No. 2 official at the Vatican’s Financial Information Authority (AIF), the Vatican’s new financial regulatory authority created under Pope Benedict XVI, and that it happened on the basis of a report from the main entity regulated by AIF, which is the Vatican bank, the whole thing can’t help but seem a bit strange.

It’s especially curious given that one of AIF’s roles at the moment is to make sure the bank is ready for the Moneyval inspection, inviting obvious questions about whose interests might be served by placing AIF in an embarrassing position, forcing its director, Swiss lawyer Rene Brülhart, to issue a public statement insisting that his own deputy hasn’t committed any impropriety.

Second, it’s odd that a property deal worth nearly $400 million in the end could have been not only considered, but acted upon, in the Francis era, without at least some indication of a green light from the pontiff.

Italian media reports have suggested it was Francis personally who approved launching an investigation of the transaction, but the prior question is how Becciu, or anyone else in the Secretariat of State, believed such a deal was even conceivable.

The affair also raises serious questions about the fate of Francis’ broader financial reform of the Vatican, although, as Jean-Baptiste de Franssu, president of the Vatican bank, argued in a recent interview with Crux, the glass-half-full reading would be that the situation proves those reforms are working, since a suspicious transaction report was filed in accord with the new requirements and an investigation ensued.

Third, there’s the part Giani played in the drama. Long seen as the Vatican’s answer to J. Edgar Hoover, meaning the security chief who simply knew too much to ever be let go, his abrupt downfall also invites curiosity about whether something else may have caused the pontiff to decide it was time to make a change.

In other words, Becciu can insist as much as he likes that there’s nothing “opaque” involved in the most recent round of financial revelations. However, suffice it to say that there remain plenty of unanswered questions.