ROME — On his return flight from Malta over the last Sunday, Pope Francis indicated that he is willing to visit Kyiv to encourage an end to the Ukraine-Russia war, which has already claimed thousands of lives and displaced millions.

However, as Pope Francis himself and others have noted, other global conflicts continue, claiming lives and worsening humanitarian crises throughout the world, from the Middle East to Africa to Asia.

Pope Francis is trying to keep his eyes on all of it.

For more than 11 years, Syria’s civil war has yielded millions of casualties, mass displacement, and one of the world’s worst humanitarian crises.

The United Nations estimates that at least 350,209 civilians and combatants were killed between March 2011 and March 2021, with the actual toll likely much higher. According to the Syrian Observatory for Human Rights (SOHR), a UK-based monitoring group with resources on the ground, the number of people killed is 494,438, of whom at least 159,774 are civilians.

In addition, more than half of Syria’s pre-war population has fled: 6.9 million people have been internally displaced, of which 6.8 million people are seeking refuge or asylum abroad.

More than 14.5 million people inside Syria need some form of humanitarian assistance. As of February, some 5 million were categorized as being in extreme or catastrophic need. Around 500,000 children in Syria are malnourished.

Pope Francis has often prayed publicly for peace in Syria, calling it a “martyred” land, and the Vatican’s envoy to Syria, Cardinal Mario Zenari, continues to speak out about the human cost of the war, the lack of infrastructure, and the need for further international support.

Another site of turmoil in the Middle East is Lebanon, which since 2019 has been in a financial freefall compounded by the coronavirus pandemic and a massive explosion at the port of Beirut in 2020.

Poverty rates have soared. U.N. estimates put the number of those living below the poverty line at 78% and those in extreme poverty at 36%. Tens of thousands of people have lost their jobs, and the Lebanese pound has lost more than 90% of its value in just two years, rooted in decades of mismanagement and corruption.

Ongoing political instability threatens the delicate religious balance that has gained Lebanon its reputation as a place of tolerance and coexistence, the fracturing of which could threaten the fate of minorities throughout the region.

British Archbishop Paul Gallagher, the Vatican’s secretary for relations with states, made a five-day trip to Lebanon in February, in what some interpreted as a down payment on a future papal trip.

Pope Francis has often spoken out about the crisis in Lebanon and has written to its leaders. Most recently, he met with Lebanese President Michael Aoun at the Vatican on March 21, and rumors are spreading in Lebanese media that Pope Francis could visit the country as early as this summer.

A six-year war in Yemen has killed more than 100,000 people, including 12,000 civilians. An additional 85,000 people in the country, many of whom are children, have died as a result of famine caused by the war, according to the Armed Conflict Location & Event Data Project (ACLED).

“Let us listen to the cry of children arising from Yemen, where an enormous tragedy, overlooked by everyone, has silently gone on for years, causing deaths every day,” said Pope Francis in one of his more recent appeals for peace and international support for the country, during his annual “urbi et orbi” address at St. Peter’s last Christmas.

A two-month ceasefire was recently brokered, which so far appears to be holding, and which could finally bring the west-Asian nation some much-needed peace after years of bloodshed. 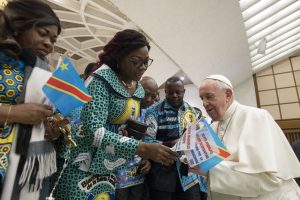 Pope Francis meets pilgrims from Congo during his general audience in the Paul VI hall at the Vatican March 2, 2022. (CNS photo/Vatican Media)

Pope Francis has long taken an active and involved interest in South Sudan, which has been mired in conflict since shortly after gaining independence in 2011.

He will stop in South Sudan July 5-7 during a trip to Africa, joined by the Archbishop of Canterbury, Justin Welby, and the moderator of the General Assembly of the Church of Scotland, Martin Fair, to make an ecumenical appeal for peace.

More than 400,000 people have died and millions have been displaced during the conflict. After several failed attempts, a lasting peace agreement was brokered in 2018, but has yet to be fully implemented.

It is expected that Pope Francis, who in 2019 welcomed South Sudan’s government and opposition leaders to the Vatican and kissed their feet in an extraordinary request for peace, will not only provide pastoral support to a battered population, but will join Welby and Fair in urging greater political action and ensuring the peace agreement is fully implemented.

Democratic Republic of the Congo

Pope Francis is also scheduled to visit the Democratic Republic of the Congo July 2-5, in a bid to encourage peace in the country, which has been ravaged by armed conflict for decades.

Conflict has ravaged much of Africa’s largest nation. In the west, opposing factions have been locked in a deadly cycle of ethnic violence and in the east, numerous armed groups operate with impunity, leaving death and destruction in their wake.

Around 5.5 million Congolese have been classified as internally displaced, and roughly 1 million are currently registered as refugees and asylum-seekers in 20 countries.

The Congo has a significant Catholic population and is home to the third-largest population of the world’s poor, behind India and Nigeria. An estimated 80% of the country’s population lives on less than $1.25 a day.

Pope Francis is expected to appeal directly to the conflict’s responsible parties to make peace.

One other place in Pope Francis’ line of sight is Myanmar, the site of an increasingly bloody and deadly conflict over the past 15 months.

Pope Francis’ visit to Myanmar in 2017 was seen as a gesture of support for the country’s fragile attempt at democracy. On Feb. 1, 2021, the country’s military launched a coup, overthrowing democratically elected leader Aung San Suu Kyi and her government.

Since then, large-scale protests and the military’s bid to squash them have turned into a full-fledged armed conflict between the military and opposition forces.

According to the United Nations Human Rights Council, more than 1,600 people have died at the hands of security forces, while 12,500 others have been detained, 44,000 have been displaced, and roughly 14 million now require some form of humanitarian assistance.

It is also reported that hundreds of children are also being held for ransom in unknown locations.

Last year, the Association of Southeast Asian Nations (Asean) attempted to broker a peace deal between Myanmar’s military government, however, little progress has been made in that direction.

Last year, Pope Francis celebrated a special Mass for peace in Myanmar and has continued to pray for the country as its internal crisis goes on.