Bishop Michael Olson of Fort Worth considers recent revisions by Pope Francis to the Code of Canon Law the “most profound step so far” in the Church’s fight against sexual abuse.

The long-awaited changes to Book VI of the Code of Canon Law were announced by the Vatican on Tuesday, and deals with “Penal Sanctions in the Church.” It includes both substantive changes to the law – like expanding the category of abusers to include non-ordained religious and laypeople, more explicit descriptions of sexual abuse crimes, and the addition of “grooming” as a crime – and also the codification of current practices.

“I think it will help not only bring healing to victims, but also prevent future abuse from taking place,” Olson, who serves on the U.S. Bishops Conference Committee for the Protection of Children and Young People, told Crux. “I think it gives us the power of law to free us up to act more clearly as we should act in keeping with the morality of the gospel.”

In particular, Olson, who was also one of the earliest prelates calling for the laicization of former Cardinal Theodore McCarrick in 2018, notes the importance of the addition of “grooming” to the new canon. 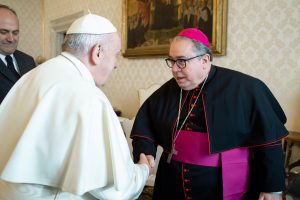 “It gives us a formal measurement for prevention,” Olson said. “For the first time the dimension of grooming behavior can be identified and addressed through discipline without having to wait for an infraction actually to occur, for somebody to get hurt.”

Another significant revision Olson notes in the new canon is the mandate that bishops and superiors “must” punish, rather than “can” punish as previously stated.

Father James Bradley, an assistant professor of Canon Law at the Catholic University of America, considers the revisions “substantial” because it’s the largest portion of the code – promulgated in 1983 – to ever be renewed, and “significant because it updates an entire and integral area of the Church’s discipline.”

Msgr. John Renken, the Dean of Canon Law at St. Paul University in Ottawa, views the fact that abuse was moved to a new chapter, and the addition of the word “dignity” to Canon 1398, as “welcome” and “innovating” decisions.

“Human beings have great dignity naturally and supernaturally and theses offenses, these delicts, against the sixth commandment of the Decalogue are not reduced to focusing on how a priest did something so terrible to his wonderful vocation, but rather the focus is that someone who is made in the image and likeness of God who is worthy of respect in all regards at all times has been compromised by a church leader, whether that’s a cleric, a religious, or a lay person in a leadership role in the church,” Renken told Crux. “That’s big.”

Of the creation of the new chapter, Olson said “it’s good recognition of the profound harm that it does cause the victim rather than just simply being a matter of the chastity for the offender.”

Both Renken and Bradley also recognize the importance of the codification of many laws that are already in place. It draws incremental changes – from things like apostolic constitutions and letters –  into a coherent whole, Bradley told Crux in an email.

“Now it’s all sort of fresh, condensed in succinct terminology in clear, crisp, understandable, canonical, here is the law. Here is the offense,” Renken said.

“For example, Vos Estis [promulgated by Francis in 2019] has made every cleric and religious a mandated reporter, so covering up the delict of sexual abuse of minors and vulnerable persons is itself a crime,” he continued. “That’s true now, but now it’s also codified in this canon, inserted into the beginning of the list of specific offenses as a delict against church authority and exercised functions in the church.”

Although the changes were announced this week, they won’t go into effect until Dec. 8. In the meantime, both canon law experts believe the next seven months are an important educational period for church leaders.

Bradley further noted the impact of the revisions can’t be underestimated.

“The opportunity for good is clear. What remains, however, is an equally serious need for the Church’s pastors to now take up the Pope’s urgent call to implement these norms. The new laws are only ever going to bring about real change if they are actually used,” Bradley said.

John Lavenburg is an American journalist and the national correspondent for Crux. Before joining Crux, John worked for a weekly newspaper in Massachusetts covering education and religion.