The refusal to help desperate migrants "is revolting, it's sinful, it's criminal," Pope Francis said as he canonized a bishop dedicated to assisting migrants and a Salesian brother who had immigrated with his family to Argentina.

"The exclusion of migrants is criminal. It makes them die in front of us," the pope said Oct. 9, referring to the deaths of migrants and refugees crossing dangerous seas in search of freedom and a dignified life.

At the beginning of the liturgy in St. Peter's Square, Pope Francis formally recognized the holiness of St. Giovanni Battista Scalabrini, an Italian who founded the Missionaries of St. Charles Borromeo to care for migrants, and St. Artemide Zatti, an Italian immigrant in Argentina who became a Salesian brother, pharmacist and nurse.

The prayers at the Mass included one for "those forced to leave their homeland," and asking God to teach people to share "his welcoming gaze toward all people" and "heal the throwaway culture of indifference."

Pope Francis focused much of his homily on the day's Gospel reading about the 10 lepers healed by Jesus and, therefore, allowed back into society.

"When we are honest with ourselves, we realize that we are all sick at heart, all sinners in need of the Father's mercy," the pope said. "Then we stop creating divisions on the basis of merit, social position or some other superficial criterion; our interior barriers and prejudices likewise fall. In the end, we realize once more that we are brothers and sisters."

Pope Francis asked the estimated 50,000 people at the Mass to think about whether in their families, at work and in their parishes, they are willing to walk with others and listen to them, "resisting the temptation to lock ourselves up in self-absorption and to think only of our own needs."

"To walk together -- to be 'synodal' -- is also the vocation of the church," he said. "Let us ask ourselves if we are really communities truly open and inclusive of all; if we cooperate, as priests and laity, in the service of the Gospel; and if we show ourselves welcoming, not only in words but with concrete gestures, to those both near and far, and all those buffeted by the ups and downs of life."

The pope said he is "troubled" when he sees Christians who tend to divide the world into "the good and the bad, saints and sinners; this makes them feel superior to others and exclude so many people that God wants to embrace."

Both the church and society, he said, are "still marred by many forms of inequality and marginalization."

Sts. Scalabrini and Zatti, the pope said, fought against such attitudes, dedicating their lives to the service of the poor, migrants and the sick. 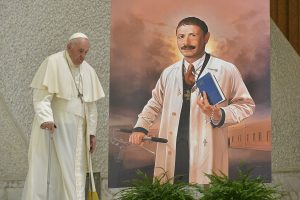 "Always be inclusive," he said.

Some people say of the migrants and refugees, "No, we do not exclude them, we send them away," he said. But they are being sent to camps, "lagers," where "they are exploited and sold like slaves," repeating what many human rights organizations have said about camps in Libya for those caught trying to cross the Mediterranean.

Another massive migration underway, particularly in Europe, involves the millions of Ukrainians fleeing the war and "forcing us to open our hearts," the pope said. "Let us not forget the beleaguered Ukraine."

"With great vision," the pope said, St. Scalabrini "looked forward to a world and a church without barriers, where no one was a foreigner."

"For his part, the Salesian Brother Artemide Zatti – with his bicycle -- was a living example of gratitude," the pope said. "Cured of tuberculosis, he devoted his entire life to serving others, caring for the infirm with tender love."

Meeting Oct. 8 with pilgrims who came to Rome to witness St. Zatti's canonization, Pope Francis gave a special shout out to religious brothers; a day earlier the Salesians had released portions of a letter then-Father Jorge Mario Bergoglio had written about his prayers and novenas to Brother Zatti in the 1970s when he was provincial superior of the Jesuits. Thanks to those prayers, the future pope wrote, from 1978 to 1986, 23 men entered the Jesuits to become brothers after years in which the society had no new brothers.

Pope Francis spoke to the pilgrims about the Zatti family's experience as immigrants in Argentina, but he also confirmed his devotion to St. Zatti as an intercessor for vocations to religious life as brothers.

"Brothers have a special charism that is nurtured in prayer and work. And they are good for the whole body of the congregation," the pope said. "They are people of piety, they are cheerful, hardworking," they do not feel inferior because they are not priests but are enriched by being a brother to all.