Evangelization efforts must be characterized by zeal to preach the Gospel and obedience to Christ and his church, Pope Francis told members of the Neocatechumenal Way.

"Go forward! Courage! Thank you for your generosity," the pope said June 27. "Do not forget the gaze of Jesus, who sent each of you to preach and obey the church."

Meeting with the pope at the Vatican, members of the Neocatechumenal Way were preparing to send priests and 450 families out on missions of evangelization and education to every continent.

Founded in Spain in the 1960s, the Neocatechumenal Way was defined by St. John Paul II as "an itinerary of Catholic formation." According to its website, the Way is present in 134 countries "with 21,300 communities in 6,270 parishes, as well as 1,668 families in mission."

Kiko Argüello, who co-founded the Neocatechumenal Way along with the late-Carmen Hernandez, thanked the pope for "accepting to send these families" as missionaries. He also announced that the Archdiocese of Madrid will officially open the sainthood cause of Hernandez, who died in 2016. 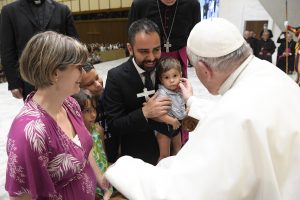 In his off-the-cuff remarks, the pope reflected on Jesus' call to his disciples to preach the Gospel and to baptize. The communities formed in countries around the world, he said, must grow "in their own ways, in their own culture."

"This is the story of evangelization. All equal in terms of faith," he said, "but all with the modality of their own culture or the culture of the place where the faith was preached."

But while the Gospel may adapt to different cultures, the same spirit remains, he said.

"The Gospel of Jesus Christ -- not mine, it is Jesus Christ's -- adapts to different cultures, but it is the same. Faith grows, faith becomes inculturated, but the faith is still the same," the pope said.

The pope thanked the members of the Neocatechumenal Way for their "missionary spirit" and encouraged them to be docile to "the Spirit who sends you; docility and obedience to Jesus Christ in his church."

"Everything within the church, nothing outside the church," the pope said. "This is the spirituality that must accompany us always: to preach Jesus Christ by the power of the spirit in the church and with the church."