For history’s first pope named for Francis of Assisi, the saint’s Oct. 4 feast is bound to be a big deal, and this year is no exception, as several major Vatican events are already on the calendar.

On Sunday, Pope Francis announced a special “Season for Creation,” opening on the Sept. 1 World Day of Prayer for the Care of Creation and closing on the Oct. 4 feast of St. Francis.

Carrying the suggested theme, “Jubilee for the Earth,” the month-long event is part of a wider, year-long celebration marking the 5-year anniversary of Pope Francis’s eco-encyclical, Laudato Si, published in June 2015, and is designed to encourage communities to rethink their relationships with one other and with creation through a series of in-person and online events organized at a local level throughout the world.

Vatican sources have told Crux that the Season for Creation is expected to culminate with the publication of the pope’s new encyclical on human fraternity on Oct. 4, coinciding with the feast of St. Francis of Assisi.

Since the beginning of his papacy, Pope Francis has embraced and celebrated his namesake as a model for justice and brotherhood.

Speaking to some 5,000 journalists just days after his election to the papacy in 2013, Francis said he first thought of naming himself after the great 13th century saint when, after it was obvious he had won the necessary two-thirds majority vote, Brazilian Cardinal Claudio Hummes, Archbishop Emeritus of Sao Paolo, hugged him and told him, “Don’t forget the poor.”

“Those words came to me: the poor, the poor. Then, right away, thinking of the poor, I thought of Francis of Assisi. Then I thought of all the wars, as the votes were still being counted,” he said at the time, adding that for him, St. Francis “is also the man of peace.” 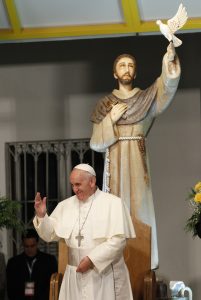 Pope Francis waves near a statue of St. Francis of Assisi as he meets with patients at a hospital in Rio de Janeiro July 24, 2013. (CNS photo/Paul Haring)

“That is how the name came into my heart…For me, he is the man of poverty, the man of peace, the man who loves and protects creation,” the pope said, calling St. Francis, “the poor man who wanted a poor church. How I would love a church that is poor and for the poor.”

Since then, the fight against poverty and inequality, the pursuit of peace by renewing bonds of brotherhood, and care of the environment have all become staples in Francis’s papacy.

These were all topics that emerged as core themes of Laudato Si’ – the title of which comes from a hymn to creation written by St. Francis – and they have resurfaced again in his weekly general audience catechesis on the coronavirus.

In his Aug. 12 audience, Francis told viewers of the livestreamed event that the pandemic “has highlighted how vulnerable and interconnected we all are. If we do not take care of each other, starting with the least – those who are most affected, including creation – we cannot heal the world.”

In his Sept. 1 message for the World Day of Care for Creation, which is also celebrated by the Orthodox Church of Constantinople, Francis insisted that “everything is interconnected, and that genuine care for our own lives and our relationships with nature is inseparable from fraternity, justice and faithfulness to others.”

He condemned what he called the “historic exploitation of the global South,” insisting that this “has created an enormous ecological debt, due mainly to resource plundering and excessive use of common environmental space for waste disposal. It is a time for restorative justice.”

Francis again called for debt forgiveness for poor countries struggling with the impact of the coronavirus, and urged all nations to adopt “more ambitious national targets” for reducing carbon emissions ahead of the COP26 summit in Glasgow, and asked the global community to join forces to ensure that the COP15 Summit on Biodiversity set to take place in Kunming, China “becomes a turning point” for environmental care.

For Francis, peace and justice have always involved a renewed sense of interconnectedness and brotherhood, and his solution to fighting global inequalities has always featured pleas for a heightened sense of fraternity and solidarity – all of which are themes likely to resurface in his new encyclical on human fraternity.

During Pope Francis’s visit to Abu Dhabi in February 2019, he participated in a conference on interreligious dialogue which culminated with the signing of a document on human fraternity highlighting the importance of coexistence and resisting violence, and which was signed by both himself, and the Grand Imam of Al-Azhar, Ahmed el-Tayeb.

At the time, then-Vatican spokesman Alessandro Gisotti called the document “a vibrant appeal to respond with good to evil, to reinforce interreligious dialogue and to promote mutual respect in order to block the road to those who add fuel to the fire of the clashes between civilizations.”

“Before humanity, wounded by so many divisions and ideological fanaticisms, the Pontiff and the Grand Imam of Al-Azhar demonstrate that promoting a culture of encounter is not a utopia, but is the necessary condition for living in peace and leaving for future generations a better world than the one in which we live,” he said.

There’s a connection here too between the pope and his 13th century namesake, since St. Francis also crossed historic divides to reach out to the Muslim world. In 1219, he crossed the battle lines of the Fifth Crusade and ended up conversing with Sultan Malek al-Kamil, a respectful exchange seen as paradigmatic for Christian/Muslim dialogue ever since. Appropriately, their encounter took place during September, in the run-up to what would eventually become St. Francis’s feast day.

That Abu Dhabi document is in many ways a precursor for the encyclical, which will likely emphasize ecumenical and interfaith connections in the fight to protect the environment and pursue a more equitable charitable society in a post-pandemic world where the poor have become poorer.

Since last year, the document has been promoted through a new Higher Committee for Interreligious Tolerance in the United Arab Emirates, which was established after the pope’s visit with the task of implementing the core principles of the declaration.

By releasing his new encyclical on Oct. 4 at the close of the Season for Creation, the pope would again be entrusting St. Francis with the topics that came to his mind along with the name of his patron in a moment that sealed his papal priorities.

So those who anticipated that the coronavirus and the current limits on papal travel would slow things down at the Vatican this fall better hold onto their hats, because if the feast of St. Francis is any indication, it could be a busy fall.

Pope Francis, St. Francis of Assisi, The Season of Creation