At his general audience on Wednesday, Pope Francis warned against preachers who sow division and mistrust online.

“There is no shortage of preachers who, especially through the new means of communication, can disturb communities. They present themselves not primarily to announce the Gospel of God who loves man in Jesus, Crucified and Risen, but to insist, as true ‘keepers of the truth,’ ... what is the best way to be Christians,” the pope said June 23.

“And they strongly affirm that the true Christianity is the one they adhere to, often identified with certain forms of the past, and that the solution to the crises of today is to go back so as not to lose the genuineness of the faith. Today too, as then, there is a temptation to close oneself up in some of the certainties acquired in past traditions.”

Pope Francis said that these “new preachers” can be recognized by their “rigidity,” which contrasts with “preaching the Gospel that makes us free, makes us joyful.” 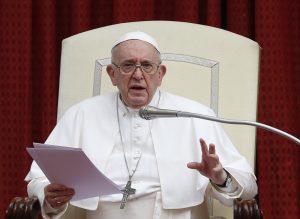 Pope Francis speaks during his general audience in the San Damaso Courtyard of the Apostolic Palace at the Vatican June 23, 2021. The pope began a new series of audience talks focused on St. Paul's Letter to the Galatians and its lessons about evangelization, faith and freedom. (CNS photo/Paul Haring)

“The new preachers know neither meekness nor obedience,” he said.

The pope began a new cycle of catechesis this week on St. Paul’s Letter to the Galatians, which, he suggested, “seems written for our times.”

“It is a very important letter, I would say decisive, not only to get to know the Apostle better, but above all to consider some topics that he deals with in depth, showing the beauty of the Gospel,” the pope said.

Paul “addresses some very important themes for the faith, such as those of freedom, grace, and the Christian way of life, which are extremely current because they touch many aspects of the life of the Church of our day. This is a very current letter,” he added.

In particular, the pope highlighted how St. Paul responds to a pastoral concern in his Letter to the Galatians: Opponents of Paul had argued that he was not a true Apostle and therefore had no authority to preach the Gospel.

“Indeed, some Christians who had come from Judaism had infiltrated these churches, and began to sow theories contrary to the Apostle’s teaching, even going so far as to denigrate him. They began with doctrine -- ‘No to this, yes to that,’ and then they denigrated the Apostle,” he said.

“It is the usual method: undermining the authority of the Apostle. As we can see, it is an ancient practice to present oneself at times as the sole possessor of the truth, the pure, and to aim at belittling the work of others, even with slander.”

Pope Francis said that this is exactly the way that “the evil one” seeks to divide Christian communities today.

“Let us think about how some Christian communities or dioceses first begin with stories, and then they end by discrediting the priest or the bishop. It is precisely the way of the evil one, of these people who divide, who do not know how to build. And in this Letter to the Galatians, we see this process,” he said.

Paul’s Letter to the Galatians also provides a model of missionary evangelization, the pope said.

“In his indefatigable work of evangelization, the Apostle succeeded in founding several small communities scattered throughout the region of Galatia. Paul, when he arrived in a city, in a region, did not construct a great cathedral immediately, no. He created small communities that are the leaven of our Christian culture today,” he said.

Pope Francis added: “Today, too, this pastoral method is used in every missionary region. I received a letter last week, from a missionary in Papua New Guinea, telling me that he is preaching the Gospel in the forest, to people who do not even know who Jesus Christ was. It is beautiful! One begins by forming small communities.”

At the beginning of the general audience in San Damaso Courtyard, the pope spent nearly 40 minutes greeting pilgrims. He gave blessings, signed prayer cards, greeted infants, and playfully switched his white zucchetto with one held up from the crowd by a young man. 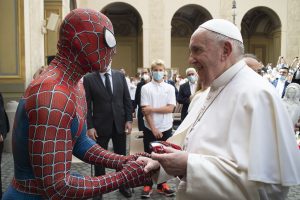 Pope Francis greets Mattia Villardita, 27, from northern Italy, dressed as Spider-Man, during his general audience in the San Damaso Courtyard of the Apostolic Palace at the Vatican June 23, 2021. The pope began a new series of audience talks focused on St. Paul's Letter to the Galatians and its lessons about evangelization, faith and freedom. (CNS photo/Vatican Media)

Among the pilgrims gathered in the San Damaso Courtyard, was a friendly neighborhood Spider-Man.

Mattia Villardita volunteers in his free time by dressing up as Spider-Man to visit sick children in hospitals. After meeting the pope in full costume, he told CNA that Pope Francis told him to “take a lot of selfies with the kids in the square.”

“The path indicated by the Apostle is the liberating and ever-new path of Jesus, Crucified and Risen; it is the path of proclamation, which is achieved through humility and fraternity,” the pope said.