Pope Francis: To seek status over service is a spiritual illness

Do good from a spirit of service, not from a desire for personal glory, Pope Francis said on Sunday.

In his message before the Angelus prayer Oct. 17, Pope Francis said there is a worldly mentality which tempts even Catholics “to experience everything, including relationships, in order to feed our ambition, to climb the ladder to success, to reach important positions.”

“The quest for personal prestige can become a spiritual malady, masquerading even behind good intentions: for example, when behind the good we do and preach, we actually seek ourselves alone and our own affirmation,” he said from a window overlooking St. Peter’s Square.

This is also something that happens in the Catholic Church, he said: “How many times, we Christians – who should be servants – try to climb up, to get ahead.”

This is why we need to constantly evaluate our heart’s real intentions, he said, and to ask ourselves: “Why am I carrying out this work, this responsibility? To offer service or rather to be recognized, praised and to receive compliments?”

Pope Francis spoke about the desire for recognition during a reflection on the day's Gospel reading from St. Mark, in which two disciples, James and John, ask Jesus if they can one day sit at his right and left in glory.

“Jesus patiently offers them a great teaching: true glory is not obtained by rising over others, but by experiencing the same baptism that He would receive just a little later in Jerusalem, that is, the cross,” Francis stated.

With these words, “Jesus contrasts this worldly logic with his own,” the pope added: “instead of exalting yourself over others, get off your pedestal to serve them; instead of rising above others, be immersed in others’ lives.”

He explained that it is through our Christian baptism that we are immersed in Jesus and receive the grace that directs us to follow Christ in service to others.

“The word ‘baptism’ means ‘immersion:’ through his Passion, Jesus immersed himself into death, offering his life to save us. Therefore, his glory, the glory of God, is love that becomes service, not power that seeks to dominate,” he said.

Pope Francis emphasized that “God is love and love is humble, it does not exalt itself, but descends like the rain that falls to the earth and brings life.”

“It is a grace, a fire that the Spirit has kindled in us that needs to be nurtured,” he added. “Today, let us ask the Holy Spirit to renew the grace of Baptism in us, the immersion in Jesus, in his way of being, more in service, servants.”

“And let us pray to the Madonna: she – even though she was the greatest – did not seek to rise up, but was the humble servant of the Lord, and is completely immersed in our service to help us encounter Jesus,” he concluded.

After praying the Angelus in Latin, Pope Francis voiced his support for an initiative from the Catholic charity Aid to the Church in Need (ACN): “One million children praying the rosary.”

The worldwide rosary campaign is held annually on Oct. 18, the feast of St. Luke. 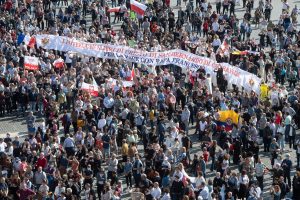 People in St. Peter's Square attend the Angelus led by Pope Francis from the window of his studio overlooking the square at the Vatican Oct. 17, 2021. (CNS photo/Vatican Media)

More than 100,000 children from 44 countries, including the United States, Spain, Kenya, India, Colombia, and the Philippines, have already registered to take part in the initiative, according to an online map published by ACN.

“I encourage this prayer campaign that has been entrusted to the intercession of Saint Joseph in a particular way this year,” Pope Francis said. “Thanks to all the boys and girls participating in it.”

The pope also drew attention to the beatification of Fr. Juan Elías Medina and 126 fellow martyrs, which took place in Córdoba, Spain on Oct. 16.

Medina and the 126 companions – among them priests, religious, and lay people – were killed in hatred of the faith during the religious persecution of the Spanish Civil War from 1936 to 1939.

Francis prayed that their fidelity would “grant us all, especially persecuted Christians in various parts of the world, the strength to witness to the Gospel courageously.”

Pope Francis also said he is near to the families of the victims of recent violent attacks in Norway, Afghanistan, and England.

One of the victims was Catholic and pro-life British lawmaker Sir David Amess, who died Oct. 15 after suffering multiple stab wounds at a Methodist church in southeast England.

Amess, 69, was a Member of Parliament since 1983 and a member of the Conservative party. He was holding a meeting with his constituents at Belfairs Methodist Church when the attack took place.

A 25-year-old man has been arrested in connection with the killing, and is being held for questioning under the Terrorism Act after early investigations uncovered a potential link to Islamic extremism, the BBC reported Oct. 17.

“I beg you to please abandon the path of violence that is always a losing cause and is a defeat for everyone. Let us recall that violence begets violence,” Pope Francis said.