Pope Francis on climate and migration: ‘To see or not to see, that is the question’

Renewing his calls for an integral ecology and pastoral reach to climate displaced people, Pope Francis channeled his inner William Shakespeare, arguing that when engulfed by images of people uprooted by changes in climate, “to see or not to see, that is the question!”

“We are engulfed by news and images of whole peoples uprooted by cataclysmic changes in our climate, forced to migrate,” Francis wrote. “But what effect these stories have on us, and how we respond – whether they cause fleeting responses or trigger something deeper in us; whether it seems remote or whether we feel it close to home — depends on our taking the trouble to see the suffering that each story entails.”

Francis’ words came in the preface to a booklet released by the Vatican on Tuesday, titled The Pastoral Orientations on Climate Displaced People. The pontiff argued that it’s full of “relevant facts, interpretations, policies and proposals,” but addressing the challenge these people face starts “with each one’s seeing, yes, mine and yours.”

The document, available online, delves into the nexus between the climate crisis and forced migration, calling on society to avoid the “false polarization between care for creation on the one hand and development and the economy on the other.”

Introducing the booklet, the director of the Holy See press office, Italian Matteo Bruni, noted that “climate change and poverty, and by extension migration, are integrally related.”

The booklet was presented in Rome through an online press conference, that included Cardinal Michael Czerny, undersecretary of the Vatican’s migrants and refugees’ section. 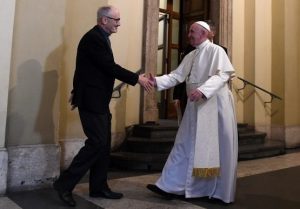 Pope Francis shakes hands with Undersecretary of the Migrants and Refugees Section of the Dicastery for Promoting Integral Human Development, Michael Czerny during an audience with refugees arriving from Lesbos at the Vatican, Thursday, Dec. 19, 2019. (Ettore Ferrari/ANSA via AP.)

“These are the first pastoral orientations which really respond to a new and spreading phenomenon,” Czerny said. “We have a lot to learn, but most importantly, we want to learn how to respond. The needs these people face, are immediate.”

Cecilia Dall’Oglio, director of the European programs of the Catholic Movement for Climate, said that the first concrete answer to the crisis of climate is finding spaces for collaboration and strategic action “in the joy of walking together,” adding that as Pope Francis writes in the preface, it’s impossible to emerge from challenges such as this one and the COVID-19 pandemic through individualism but only by “being together.”

Walking together as members of the Catholic Church with a plurality of charisms, she said, is the answer to the prayer before those who suffer from climate change, “to the cry that resounds in our heart.”

Father Joshtrom Isaac Kureethadam, an official of the Vatican’s Dicastery for an Integral Human Development and coordinator of the ecology section Vatican’s COVID-19 taskforce, argued that the climate crisis and other ecological hazards are becoming the primary drivers of displacements and could re-shape the patterns of migration in the coming decades.

“It’s ultimately a moral problem,” Kureethadam said. “The poor and vulnerable communities whose carbon emissions are only a fraction of those of the rich world are already the early and disproportionate victims of the crisis.”

The priest argued that it’s “an ethical imperative” for humanity to reduce their disproportionately large emissions, cutting them by half by 2030 and reaching net zero emissions before 2050.

“Nations need to commit to much more ambitious targets at the Climate Summit – COP26 – which appears to be a like ‘a last call’ for our planet,” he said. “We need to embark on ‘rapid and far-reaching’ low carbon strategies in terms of energy transition, sustainable life styles, circular economy, sustainable agriculture and industry. This is not just philanthropy. It is only paying back the ‘ecological debt’ that we owe to the most vulnerable amongst us.”

The COP26 is the 26th United Nations Climate Change Conference, that will be held in November in Glasgow.

In the preface to the book, Pope Francis writes that despite seemingly inevitable for people to be driven out because of their local environment becoming uninhabitable through a process of nature, “the deteriorating climate is very often the result of poor choices and destructive activity, of selfishness and neglect, that set humankind at odds with creation, our common home.”

Unlike the pandemic, which was a sudden development, the pope wrote, the climate crisis has been unfolding since the Industrial Revolution and remained imperceptible except to a few “clairvoyants,” and it’s uneven in its impact: Climate change happens everywhere, but those who have contributed the least to it are the most affected by it.

Francis writes that those who are driven from their homes by the climate crisis are to be welcomed, protected, promoted and integrated.

“The Pastoral Orientations on Climate Displaced People calls on us to broaden the way we look at this drama of our time,” he writes. “It urges us to see the tragedy of prolonged uprootedness that causes our brothers and sisters to cry out, year after year, ‘We can’t go back, and we can’t begin anew’.”

“To see or not to see is the question that leads us to the answer in action together,” Francis writes. “These pages show us what is needed and, with God’s help, what to do.”