VATICAN CITY (CNS) -- With the birth of Jesus, God became flesh to share the joys and sorrows, hopes and fears of all people, especially the poor and those living daily amid danger, Pope Francis said in his Christmas message.

"He comes as a helpless child. He is born in the cold night, poor among the poor. In need of everything, he knocks at the door of our heart to find warmth and shelter," the pope said Dec. 25 before giving his blessing "urbi et orbi" (to the city and the world).

Tens of thousands of people gathered in St. Peter's Square under warm, sunny skies for the blessing and for the pope's message inviting people to pay less attention to presents and more to prayer, particularly for Ukraine and other places where war and strife challenge the angels' proclamation of "peace on earth."

"Let us leave behind the hue and din that deadens our hearts and makes us spend more time in preparing decorations and gifts than in contemplating the great event: the son of God born for us," Pope Francis told people in the square and those listening by radio or watching on television or online.

"Brothers and sisters," he told them, "let us turn our eyes to Bethlehem and listen to the first faint cries of the Prince of Peace. For truly Jesus is our peace."

The incarnation, passion, death and resurrection of Jesus "opened the way that leads from a world closed in on itself and oppressed by the dark shadows of enmity and war, to a world that is open and free to live in fraternity and peace," the pope said. 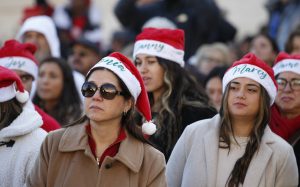 People wear Santa hats as the wait for Pope Francis to deliver his Christmas message and his blessing "urbi et orbi" (to the city and the world) from the central balcony of St. Peter's Basilica at the Vatican Dec. 25, 2022. (CNS photo/Paul Haring)

To follow Jesus' path of peace, he said, "we must divest ourselves of the burdens that weigh us down and block our way," the same obstacles that prevented King Herod from welcoming the birth of Jesus: "attachment to power and money, pride, hypocrisy, falsehood."

In the "small and innocent face" of the baby Jesus lying in the manger, he urged, "let us see the faces of all those children who, everywhere in the world, long for peace."

In his 10th Christmas message as pope, Pope Francis denounced the "grave famine of peace" around the globe.

Mentioning specific hot spots, he started with Ukraine, praying for those celebrating Christmas "in the dark and cold, far from their homes due to the devastation caused by 10 months of war."

The pope urged people to continue being generous in making donations and welcoming people displaced by the fighting. His almoner, Cardinal Konrad Krajewski, was spending Christmas in Ukraine, delivering generators and warm clothing and other aid in the pope's name.

May God "enlighten the minds of those who have the power to silence the thunder of weapons and put an immediate end to this senseless war," he prayed.

And while Ukraine dominates the news, Pope Francis also prayed for peace in Syria, Yemen, Myanmar and across the Sahel region of Africa.

Turning to the Holy Land, "where in recent months violence and confrontations have increased, bringing death and injury in their wake," he prayed that "there, in the land that witnessed his birth, dialogue and efforts to build mutual trust between Israelis and Palestinians may resume." 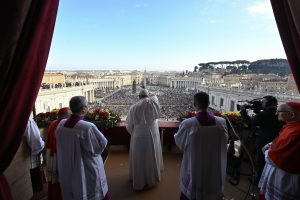 Pope Francis greets the crowd as he leads his Christmas message and his blessing "urbi et orbi" (to the city and the world) from the central balcony of St. Peter's Basilica at the Vatican Dec. 25, 2022. (CNS photo/Vatican Media)

In Lebanon, where economic and political crises continue, the pope prayed that the country can "finally rebound with the help of the international community and with the strength born of fraternity and solidarity."

In Central and South America, where "political and social tensions" continue in several nations, the pope prayed that the light of Christ would inspire political leaders and all people of good will.

And he offered special prayers for "the people of Haiti who have been suffering for a long time."

Knowing that many people in St. Peter's Square and watching around the world would soon be sitting down to a festive and abundant meal, Pope Francis asked that they be mindful of "all those, especially children, who go hungry while huge amounts of food daily go to waste, and resources are being spent on weapons."

Russia's war on Ukraine, a major supplier of grain for the world, is putting whole nations at risk of famine, he said, condemning the use of food as a weapon of war.

Unfortunately, he said, just like 2,000 years ago, "Jesus, the true light, comes into a world sick with indifference -- a terrible sickness -- a world that does not welcome him and indeed rejects him, as it does with many foreigners, or ignores him, as we all too often do with the poor."

Pope Francis prayed that this Christmas "may we not forget the many displaced persons and refugees who knock at our door in search of some comfort, warmth and food. Let us not forget the marginalized, those living alone, the orphans and the elderly who risk being set aside, and prisoners, whom we regard solely for the mistakes they have made and not as our fellow men and women."