People with disabilities were often overlooked and faced discrimination in various health care policies and practices during the COVID-19 pandemic, said the Pontifical Academy for Life.

"The negative experiences of persons with disabilities during this pandemic do not only stem from the increased vulnerability" of contracting the virus and developing serious symptoms, "they also stem from society's failure, generally, to value and include persons with disabilities when developing and implementing public health policies," the academy said in a new document.

Also, in many countries, "the predominant ethical framework for practice and policy has been utilitarian and aimed at the greatest good for the greatest number in society. Such a framework has not served persons with disabilities and their families well," it said.

Drafted in collaboration with the Vatican COVID-19 Commission and a group of academy experts in the field, the document outlined several ethical concerns regarding health care and people with disabilities, particularly the ways emergency measures and scarce resources brought on by the pandemic exacerbated vulnerabilities and marginalization they had already faced. It also provided a number of "practical recommendations" for what members of the Catholic Church should do in response.

The document cited statistics from the first ever WHO/World Bank report on disability in 2011, estimating that at least one in six people in the world, at least 15% of the world's population, was living with some form of disability. That global estimate for disability is naturally on the rise due to population growth, "aging and the rapid spread of chronic diseases, as well as improvements in the methodologies used to measure disability," the report had said.

The academy said that "many persons with disabilities are among those at highest risk for severe illness and death due to COVID-19" because of comorbidities and because they face "unequal access to health care and other needed supports."

People with disabilities "fared far worse during this pandemic than those who do not experience similar health inequities" or barriers to access, it said. 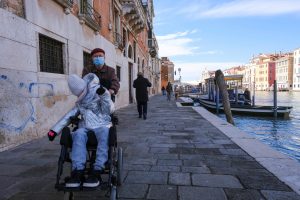 A man pushes a wheelchair with a disabled child during the COVID-19 pandemic, in Venice, Italy, in this March 15, 2021, file photo. (CNS photo/Manuel Silvestri, Reuters)

For example, information about prevention, care and vaccination was not always made for people with sensory or cognitive impairments and people with limited mobility or sensory sensitivities were often not accommodated for testing, vaccinations or treatment, it said. Policies restricting visits to hospitals and care facilities, when other precautions are taken, also have not always been relaxed "to enable family members and other caregivers to accompany persons with disabilities."

The document said people with disabilities should be involved and supported as much as possible to make decisions about their health care needs and plans "at all times, including during pandemics."

Unfortunately, people with intellectual and developmental disabilities also "faced discrimination in decisions or policies regarding allocating ventilators and other scarce resources during this pandemic because of a presumed poor quality of life," it said.

This "ableist bias, pervasive in healthcare systems," looks negatively upon disabilities and perceives people with disabilities "as having lives that are less worth conserving," it said.

A "utilitarian" framework also affects people with disabilities when policies claim to focus on "the greatest good" or "the common good," and those with disabilities must compete with others for advocacy, recognition and scarce resources, including vaccines, it said.

"Solidarity and a preferential option for the poor and vulnerable should guide allocation priorities," the document said.

Among the practical recommendations in the academy's document are:

-- Persons with disabilities and their families should be consulted in developing public health policies, and the effects of policies on their health and well-being should be monitored.

-- Catholic health care organizations should "show leadership in responding to the needs of persons with disabilities and their families during and after this pandemic."

-- Persons with disabilities should be among those prioritized for COVID-19 vaccines not just when there is a higher risk of infection, but because of barriers they face in accessing essential support and services.

-- There needs to be more global cooperation, public-private partnerships and grassroots initiatives to increase vaccine acceptance and equitable distribution worldwide.

-- With the backlog of patients waiting for regular health care that was put off during the pandemic, there should be increased access for those with disabilities "so that they are not left behind in the queue for such services."