It’s a simple sketch of a basic all-electric car, set off by designer Henrik Fisker’s signature at the bottom.

What will make it a treasured keepsake is the fact there was another simple autograph added to the piece of paper, at the top. That came from Pope Francis.

The signature is nothing less than a papal stamp of approval on the first exhaust-free and emissions-free vehicle to be part of the Vatican transportation fleet. It also represents the genesis story of how a globally renowned automobile visionary based in Manhattan Beach came to seek divine assistance in creating a one-of-a-kind ride for the leader of the Catholic Church. 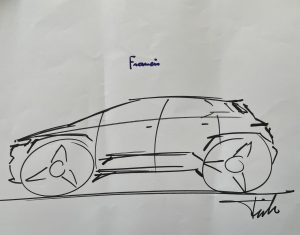 The sketch of the new Fisker popemobile signed by Pope Francis.

Last May 20, a private audience in Rome with Pope Francis was arranged for Fisker, the chairman, CEO and founder of Fisker Inc., and his wife, Geeta Gupta-Fisker, the company’s chief financial officer and chief operating officer.

Being familiar with the pope’s concerns about the impact of the climate on future generations – especially those expressed in his 2015 encyclical Laudato si'  – Henrik Fisker explained to Angelus why he felt compelled to take action.

“Pope Francis often speaks of his concern for the environment, so an electric vehicle with no emissions and no exhaust output is an ideal choice for the next papal transport vehicle,” Fisker said.

“Pope Francis expected me to show him some renderings of the vehicle and seemed pleased with what we showed him.”

The meeting came about at least in part thanks to a mutual friend of Fisker’s and the pope’s who suggested it.

Domingo Zapata, a Spanish neo-expressionist artist and fashion designer, was appointed by Pope Francis to be his ambassador for his arts education charity, the Pontifical Scholas Occurrentes Foundation. The two first connected in 2018 to assist in Pope Francis’ idea to create a piece of art in celebration of immigrants.

Zapata, who works from a studio in Hollywood as well as in New York and Miami, recently posted some Fisker car designs on his Instagram account and wrote: “Great to be joining the Fisker team. Together we will bring more beauty and purpose into the world.”

Fisker showed Pope Francis more photos of his planned four-wheel drive EV SUV Ocean model, a $37,000-based-priced vehicle expected to be revealed at the Los Angeles Auto Show this November. The modified version to the pope’s specifications is expected to be finished and donated to His Holiness by late 2022.

More than just an all-electric car, Fisker’s plans include an interior made up of a variety of sustainable materials, including carpets made from recycled plastic bottles recovered from the ocean — hence the vehicle’s name.

“The initial meeting was conducted through a translator, but he did appear intrigued by the all-electric propulsion and the electrified operation of the glass cupola,” said Fisker, a 57-year-old Danish native, describing the term used for the extended bubble that will emerge from the car’s roof for the Pope to stand in and be seen while driving through crowds. 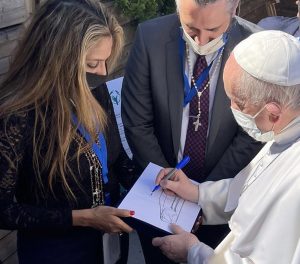 Pope Francis signs a sketch of the Fisker popemobile at a private audience with Henrik Fisker and his wife, Geeta Gupta-Fisker, at the Vatican in May. (Henrik Fisker)

It is not the first time Fisker’s designs have appeared on the world stage. He started his career at BMW in Munich and put himself into the cultural map by designing a Z8 roadster that Pierce Brosnan, as James Bond, drove in the 1999 film “The World is Not Enough.”

“His feelings for James Bond were unfortunately not revealed” at the audience in Rome, Fisker was quick to add.

Several eco-friendly vehicles for the Pope’s use have recently been produced by Toyota (a hydrogen fuel-cell Mirai), Renault (an electric van) and Mercedes-Benz (a hybrid). Pope Francis has been said to be most fond of modest vehicles such as a Ford Focus or smaller economy cars produced by Fiat or Jeep.

Through the years, custom-built vehicles are often given to popes for their public appearances have been more commonly called “popemobiles.” Mercedes-Benz, which has been providing vehicles to the Pope since 1930, released a statement when it gave St. Pope John Paul II an M-Class Mercedes-Benz in 2002 asking the media to stop using the term “papa-mobile” because the pontiff said it was “not commensurate with the dignity and purpose of these automobiles.”

Fisker says he has undertaken the project well aware of the teachings of Laudato si’, in which the pope urged “swift and unified global action” to confront environmental degradation and man-made climate change. Francis argued that the environmental crisis can ultimately only be solved if our immense technological developments are accompanied by a “development in human responsibility, values, and conscience.”

Asked if he might sense that employees of Fisker Inc., whether they were Catholic or otherwise, might take a sense of price and a connection to the Pope because of this new relationship, Fisker responded: “We are proud of any stakeholder willing to trust us to build a beautifully considered vehicle for them, regardless of religion. We are all humbled and honored to build a vehicle for Pope Francis, especially given his concerns for the environment.”