COVID vaccine illustrates how Vatican made peace with science

ROME — When the COVID-19 pandemic began to hit Europe and much of the rest of the world early last year, no one, it seemed, was prepared.

That includes the Vatican, which, being its own country, has tried from the beginning to keep pace with developing knowledge of the disease and its implications. It has mostly taken its cues from the advice given by top medical and science experts.

In many ways, the pandemic has served as another example in how faith and science can be natural allies, assuming, of course, that the faithful trust the advice of experts to keep them safe, and that those experts heed what the Church has to say on moral and ethical questions. 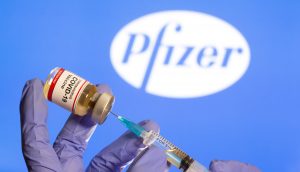 A woman holds a small bottle labeled with a coronavirus vaccine sticker and a medical syringe in front of the display of a Pfizer logo in this 2020 illustration. (Catholic News Service/Dad Ruvic, Reuters)

That intersection of faith and science has emerged as one of the consistent themes of Pope Francis’ papacy. Far from being a science skeptic, the pontiff seems to have become chaplain of the scientific consensus on issues from the coronavirus to climate change.

Since his election in 2013, he has revamped both the John Paul II Institute for Marriage and Family Sciences and the Pontifical Academies for Life and Sciences, the two Vatican entities that deal directly with often-thorny scientific questions, and revised the curricula for Catholic universities. In doing so, he has emphasized the importance of dialogue and consistent interaction between theologians and secular experts in the given field.

Pope Francis is also the first pope in modern times to be a trained scientist. He graduated from a state-run technical secondary school in his native Buenos Aires with a degree in chemistry, and worked in a chemistry lab before entering the seminary.

This papacy’s easy relationship with science helps explain the Holy See’s reaction to the coronavirus crisis under Pope Francis’ guidance. The Vatican’s own COVID-19 taskforce, for example, has five different working groups, one of which is dedicated to the research, study, and analysis of the coronavirus pandemic from an ecological, economic, political, labor, health care, and security perspective.

Throughout Italy’s spring outbreak and its three-month coronavirus lockdown, Pope Francis urged Catholics in the country, despite their frustrations, to follow the government’s restrictive orders, which were based on advice from a scientific-technical committee leading the government’s anti-COVID response.

Now, the Vatican is keeping that cooperative posture with the scientific community in its public guidance on the COVID-19 vaccines for Catholics. 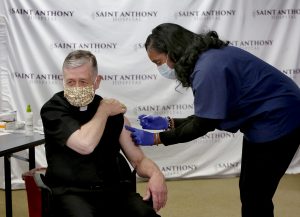 Last month, amid heated debate among some Catholics — bishops included — over the morality of using vaccines linked even remotely to abortion, the Congregation for the Doctrine of the Faith essentially greenlighted the use of the Pfizer-BioNTech and Moderna vaccines.

The two vaccines, which were both developed using cell lines derived from aborted fetuses in the 1960s, were the first to be approved for use in several countries last month and claim efficacy rates of more than 90%.

In a Dec. 21 explanatory note, the department said that in cases in which “ethically irreproachable COVID-19 vaccines” are not available, “it is morally acceptable to receive COVID-19 vaccines that have used cell lines from aborted fetuses in their research and production process.”

The reason for this, they said, is that the abortion from which medical personnel harvested the cell lines for the vaccines is “remote” enough that, in this case, it is not an issue.

While stressing the “moral duty” to avoid using products made with cells from aborted fetuses, the department also stressed that this duty “is not obligatory if there is a grave danger, such as the otherwise uncontainable spread of a serious pathological agent,” in this case, COVID-19.

“It must therefore be considered that, in such a case, all vaccinations recognized as clinically safe and effective can be used in good conscience with the certain knowledge that the use of such vaccines does not constitute formal cooperation with the abortion from which the cells used in production of the vaccines derive,” they said.

Now, after announcing its acceptance of the vaccines for Catholics all over the world, the Vatican will actually get to distribute it. 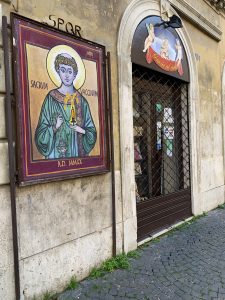 A poster of St. Stephen holding a "Holy Vaccine," by the Rome street artist known as Maupal, near the Vatican Dec. 11, 2020. (Catholic News Service/Cindy Wooden)

On Jan. 2, the Vatican’s office for health and hygiene announced it had acquired the Pfizer vaccine and will begin distributing it to Vatican City residents, employees, and their family members in the second half of the month.

Doses will be stored in an ultra-low temperature refrigerator and injections will be delivered in the Paul VI Audience Hall, beginning with health personnel and those with greatest contact with the public, as well as the elderly.

Pope Francis himself said he will receive the vaccine sometime in mid-January. Since early in the pandemic, he has perhaps been the world’s most vocal advocate for equitable distribution of the vaccines among the world’s poor.

Most recently, during his traditional “urbi et orbi” address on Christmas day, Pope Francis called the vaccines a “light of hope” at the end of an otherwise dark year for many.

Christmas, he said in the address, is a time to celebrate “the light of Christ who comes into the world, and he comes for all, not just for a few.”

He then issued an appeal to all heads of states, businesses, and international organizations to seek “a solution for everyone” in the coronavirus pandemic, meaning “vaccines for everyone, especially the poorest and most vulnerable in every region of the planet. In the first place, the most needy and vulnerable.”

Over the next few months, all eyes will be on how the Vatican handles distribution of the vaccine for its own employees and citizens. But whatever decisions await Vatican officials, we can expect they’ll be checking with the experts first.