A bishop has warned that the Church “cannot sacralize every indigenous thing, nor can we Satanize it.”

Brazilian Bishop Wilmar Santin, prelate of Itaituba, was speaking Thursday at the press conference for the ongoing synod on the Amazon taking place at the Vatican.

One journalist asked about reports of indigenous peoples practicing infanticide and cannibalism, and Santin retorted: “What about abortions in civilized countries?”

All three speakers acknowledged that infanticide was once practiced among indigenous peoples in the Amazon, but they said that through the work of missionaries - particularly religious sisters, according to Santin - the practice has been eradicated where the Church is present.

The Brazilian bishop also spoke about the fact that many Catholics in the Amazon region are defecting to other churches because “we don’t manage to arrive on time to where people are, because everything is centralized in the figure of the priest.”

“We’re looking for new paths, new strategies, because the reality is new, the challenges different from the ones we had 10 years ago,” he said. “We have to change things so that not everything depends on the priest; because if not, we’re not upholding our mission, that of proclaiming the Word of God.”

“A Catholic [in the Amazon], in order to hear the Word of God, has to go to an Evangelical church. We have to change, not to compete with others, but to fulfill our mission,” he said.

The bishop also noted that in recent years, Pentecostal groups are gaining a foothold and becoming “very aggressive” against the culture of the indigenous peoples, some even forbidding them from speaking their own languages, with pastors telling locals that it comes “from the devil.”

“We cannot sacralize every indigenous thing, not can we Satanize it,” he said.

Santin relayed the experience in his territory, where a formation course for ministers of the Word was started two years ago, and now 48 men proclaim the Gospel in their native language.

“The Church must find new ways to go forward because the reality is new,” the bishop repeated. “We must change our structure a bit and be less slow. We must carry out our mission with greater efficiency.”

Journalists also asked the three synod participants about their view on female deacons.

Only Franco answered, but at no point did she use the term. Instead, she said that the Church is currently in a “Kairos” - that is, a unique time - and that a sign of this is that there are 40 women participating in the synod and that in addition, many other women participated in the pre-synod listening sessions.

“The Church, too, has a feminine face, is woman, is teacher,” she said. “But in this ‘today’ of the world and the Church, the Church is fundamentally sister and disciple. As women, we have a path to go through, but we’re not the protagonists, as many have walked it before us, such as St. Claire of Assisi.”

The Church, the religious sister said, “discerns,” looking for a more “clear” face for women, but not one of “power, but fundamentally, of service, of giving oneself, of recognition and value of a specific role that women have in our communities as theologians, as catechists, as movers, as promoters of the people’s quality of life.”

“God will continue to encourage the Church today and in the future, in this process of discernment that continues to open new paths, new possibilities and greater synodality,” Franco said.

Most of Henao Del Río’s presentation turned around the complex situation caused by multinational corporations, that have “caused displacement of whole indigenous communities,” noting that for locals, their land is fundamentally important because their relatives are buried there.

He also said that the decades-long civil war in Colombia had a deep impact in the region, because the Marxist FARC guerrillas used the rainforest to harvest the coca plant used to make cocaine. Many young indigenous joined the rebels as an easy way to make money, completely changing their traditional lifestyle.

“We are there to fight against the exploitation of indigenous peoples,” he said. “The state is absent and has abandoned them.”

At the end of the press conference, Paolo Ruffini, the head of the Vatican’s Dicastery for Communications, issued yet another denial regarding the allegations made by Italian journalist Eugenio Scalfari, who in a recent column claimed that two years ago, during an encounter he had with Pope Francis, the pontiff denied the divinity of Christ. 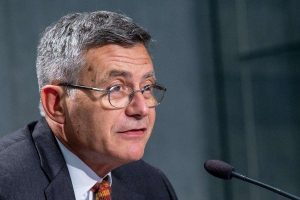 The 95-year-old self-declared atheist and founder of the newspaper La Repubblica, “reconstructed” a conversation he had with the pope, writing: “Pope Francis conceives Christ as Jesus of Nazareth, a man, not God incarnate.”

“The Holy Father never said what Scalfari wrote,” Ruffini said. “Both the quoted remarks and the free reconstruction and interpretation by Dr. Scalfari of the conversations, which go back to more than two years ago, cannot be considered a faithful account of what was said by the pope.”

“That will be found rather throughout the Church’s magisterium and Pope Francis’s own words on Jesus: True God and true man,” Ruffini said.

Synod of Bishops on the Amazon