Christmas says, 'You are loved,' pope says in homily

VATICAN CITY (CNS) -- Christmas night tells each person, no matter how poor or sinful, that they are utterly and totally loved by God, Pope Francis said as he celebrated Jesus' birth.

The grace of God revealed in the birth of Jesus in a stable in Bethlehem "is divine love, the love that changes lives, renews history, liberates from evil, fills hearts with peace and joy," the pope said in his homily Dec. 24 as he celebrated the nighttime liturgy.

"Tonight, the love of God has been revealed to us: It is Jesus," he said.

The liturgy began with the "kalenda" or Christmas proclamation of Jesus' birth "innumerable ages" after the creation of the world, "in the year of the 194th Olympiad" and in the 42nd year of Caesar Augustus' reign when the whole world was at peace.

Pope Francis processed into St. Peter's Basilica and, reaching the transept, unveiled a life-sized statue of the baby Jesus, kissed it and blessed it with incense.

Twelve children, aged 5-11, from Italy, Japan, Venezuela, Kenya, Uganda, the Philippines and Iraq brought flowers to the statue and, at the end of Mass, were to accompany the pope to the basilica's Nativity scene.

In his homily, Pope Francis told a story similar to, but quieter, than that recounted in the song, "The Little Drummer Boy." The pope's story was about shepherds who brought gifts to the baby Jesus.

"There was one shepherd who had nothing to give. He was extremely poor," the pope said. "As the others were competing to offer their gifts, he stood apart, embarrassed."

"At a certain point, St. Joseph and Our Lady found it hard to receive all the gifts, especially Mary, who had to hold the baby. Seeing that shepherd with empty hands, she asked him to draw near. And she put the baby Jesus in his arms," the pope continued.

Receiving Jesus, the shepherd "became aware of having received what he did not deserve, of holding in his arms the greatest gift of all time," the pope said. "He looked at his hands, those hands that seemed to him always empty; they had become the cradle of God."

The shepherd, feeling loved and overcoming his embarrassment, "began to show Jesus to the others, for he could not keep for himself the gift of gifts," the pope said.

"Dear brother, dear sister, if your hands seem empty, if you think your heart is poor in love, this night is for you," the pope said. "The grace of God has appeared, to shine forth in your life. Accept it and the light of Christmas will shine forth in you." 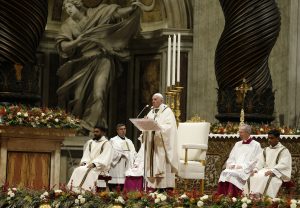 In Jesus, the pope said, the Almighty "made himself tiny, so that we might love him."

St. Paul described the coming of Jesus as "grace," he said, because it means something completely free. God's gift of Jesus is not something anyone deserves or anyone can ever repay.

Christmas is a reminder, the pope said, that "when we failed to measure up, God became small for our sake; while we were going about our own business, he came into our midst."

"Christmas," he said, "reminds us that God continues to love us all, even the worst of us."

Preaching in a packed basilica, to an overflow crowd watching on screens in St. Peter's and to millions of television viewers worldwide, Pope Francis said God's message at Christmas is, "I love you and I will always love you, for you are precious in my eyes."

"God does not love you because you think and act the right way. He loves you, plain and simple," he said. "You may have made a complete mess of things, but the Lord continues to love you."

The only thing people need to do with God's grace is accept it and let themselves be loved by God, he said.

"To accept this grace means being ready to give thanks in return," he said. "Often we live our lives with such little gratitude. Today is the right day to draw near to the tabernacle, the creche, the manger, and to say thank you."

Receiving the gift of Jesus, believers should try to be like him by being a gift for others, the pope said. "It is the best way to change the world: we change, the church changes, history changes, once we stop trying to change others but try to change ourselves and to make of our life a gift."

"Jesus shows this to us tonight. He did not change history by pressuring anyone or by a flood of words, but by the gift of his life," he said. "He did not wait until we were good before he loved us but gave himself freely to us. May we not wait for our neighbors to be good before we do good to them, for the church to be perfect before we love her, for others to respect us before we serve them."