What will the ‘adoption option’ look like after Roe?

During oral arguments last Dec. 1 for Dobbs v. Jackson Women’s Health, the Mississippi abortion case currently before the Supreme Court, a question from Associate Justice Amy Coney Barrett sparked outrage. An adoptive mother herself, Justice Barrett wondered aloud whether abortion is needed in a world where adoption is available, specifically in a no-questions-asked scenario that so-called “Safe Haven” laws anonymously allow for: dropping off a newborn at a hospital or other emergency response locations.

Her questioning — which was the subject of some vicious attacks in the ensuing media coverage — made me think of a few experiences I’ve had in the last few months.

One of them was getting to know BraveLove, a Dallas-based group that specializes in celebrating birth mothers. They have educational videos, and the core of their ministry is throwing parties for birth mothers to say thank you. Before he got to meet his own birth mother, Dennis Gerber hosted one of these parties in New Jersey to say thank you on behalf of the adopted children who wound up in loving families who don’t know whom to thank for the gift of their lives.

Another was watching the documentary “I Lived on Parker Avenue” (available for viewing free online), which tells the story of a young man living in Louisiana whose birth mother changed her mind while at an abortion clinic on Parker Avenue in Indianapolis. The short film follows his journey to meet his birth parents to express his gratitude that they gave him the gift of life, and an excellent life at that. We learn that for 20-some years, his birth mother believed he must have hated her for giving him up.

Our language around adoption — “give up” — expresses abandonment. Abandonment is a real feeling children have because of the natural bonds between a mother and child expressed physiologically. But to carry a child for nine months, knowing that there is a family that is better equipped to love him, is pure love.

The truth is that many women choose abortion over adoption for many reasons. One is that adoption is often barely given a thought, thanks to the widespread availability of abortion and the typical lack of informed consent that so many pregnant mothers are subject to. Many say they could not live knowing their baby is with someone else.

Neither option is easy. We have to be honest about this, and celebrate the women who make beautiful, hard choices. Abortion is sold as an easy solution to a problem. But a child is a blessing. A sacrificial one, for sure. But hope amid darkness, too. And there is no shortage of families who will welcome a baby into their homes.

Certainly, the difficulties that older adopted children face represent a challenge we need to tackle in earnest. They don’t have a lot of time before they are out on their own, often only to get arrested, for the sake of some security.

In a post-Roe America, pro-lifers will face the hurdles of taking on the stigma associated with adoption. We live in a world where pro-abortion ideologues deploy the term “forced birth” to describe encouraging a woman to choose adoption.

In a recent Wednesday General Audience at the Vatican, Pope Francis addressed this very issue head-on in a catechesis on St. Joseph as foster father: 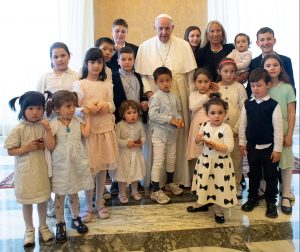 Pope Francis poses during an audience with a delegation from the Institute of the Innocents, a Florence-based organization dedicated to caring for children. The pope met the delegation at the Vatican May 24, 2019, during an audience marking the 600th anniversary of the Italian institute. (CNS photo/Vatican Media)

“I think particularly of all those who are open to welcoming life by way of adoption, which is such a generous and beautiful, good attitude. Joseph shows us that this type of bond is not secondary; it is not second best. This kind of choice is among the highest forms of love, and of fatherhood and motherhood. How many children in the world are waiting for someone to take care of them!”

He also made a plea that we in the United States need to take seriously. There are more than 400,000 children in foster care in our country, one where the full extent of the consequences of the COVID-19 pandemic for children in abusive and drug-addicted homes is as yet unclear:

“If you cannot have children, think about adoption. It is a risk, yes: Having a child is always a risk, either naturally or by adoption. But it is riskier not to have them. It is riskier to deny fatherhood or to deny motherhood, be it real or spiritual. A man or a woman who does not voluntarily develop a sense of fatherhood or motherhood are lacking something fundamental, something important. Think about this, please.”

This year, in the United States, we face the real prospect of the end of the Roe v. Wade regime imposed by the Supreme Court in the Mississippi challenge currently before the court. Catholics today make headlines the most for making excuses for politicians who support abortion. Instead, we need to be unmistakably known as those who walk with mothers in need. Many mothers do not want to abort their children, but they feel that they cannot take on the responsibility of additional children.

When he was archbishop of New York, the late Cardinal John O’Connor said, “If you are pregnant and in need, come to the Catholic Church.”

Cardinal O’Connor wound up founding the Sisters of Life, a religious community dedicated to helping mothers, and throughout the years. But all of us would do well to step into this charism, to radiate a spirit of hospitality in the way we live.

In the end, we didn’t have to wait for a catechesis on St. Joseph from a pope to know that adoption and caring for orphans is critical to our faith — it’s in Scripture and all over the prayers of the Church. This is a critical part of being pro-life, and of being a Christian, too: we who have become adopted sons and daughters through Christ.