The Sept. 12 wedding uniting Krystal Gil and Jack Scanlon in the Spanish courtyard of St. Mary Magdalen Church in Camarillo was not what either had in mind the day they got engaged.

Processing down the aisle, Krystal beamed like any bride on her wedding day would, except a mask concealed her smile. Those in the small, socially distanced crowd smiling back at her had face coverings on, too, an all-too-familiar scene at weddings across the county this year since coronavirus (COVID-19)-related restrictions began to be lifted for public gatherings. 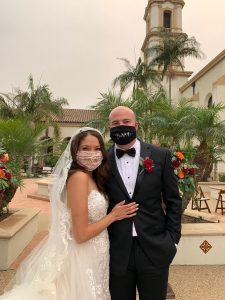 Jack and Krystal Scanlon after their Sept. 12 wedding in the courtyard of St. Mary Magdelen Church in Camarillo. (Submitted photo)

“I think the hardest thing was not having my grandparents there,” newlywed Krystal Scanlon told Angelus. After getting engaged in July 2019, she and her fiancé had planned to invite more than 350 guests to their wedding. The pandemic forced them to slash that list down to less than a quarter of its original size.

“You envision the people that you love [being] there on your wedding day,” she continued, “so that was hard to let go of.”

Countless weddings across the world were postponed, altered, or altogether canceled due to the pandemic. But for Catholic couples like the Scanlons, the wedding day is more than a well-planned family celebration — it’s a sacrament, the beginning of a bond created by God.

So while risks and regulations meant letting go of the wedding they had dreamt of for months, if not years, Catholic newlyweds across the U.S. shared with Angelus how making it to the altar in the time of the coronavirus was a faith experience.

Soon after their engagement last July, Krystal and Jack booked St. Jude the Apostle Church in Westlake Village for July 11, 2020. They were still optimistic about those plans during the first virus-related closures in March, but as shelter-in-place orders dragged on, the families’ concerns grew.

“There was a time when we kind of put all of the planning on hold,” Anitra Gil, mother of the bride, told Angelus. “And we just prayed, ‘Okay, God, your will be done. What do you want us to do?’ … We surrendered it to God.”

When St. Jude closed its doors to all services, the family scrambled to find another venue in order to avoid postponing the wedding date. Keeping their hopes up, they signed up for a slot at the San Gabriel Mission Church, a historic landmark for Californians and the Gil family specifically.

“My husband grew up and received all his sacraments and went to school at the San Gabriel mission,” said Anitra. “[It] has a huge place in our heart.”

By then, it seemed a new plan was taking shape. That is, until, early on the morning of the scheduled wedding date, a fire erupted and left the mission in ruins.

“It’s been a rocky road leading up to where we are now!” said Anitra.

For Krystal, one of the biggest challenges of the tumultuous planning process was the uncertainty. “Every time we met with a vendor or a church, the constant answer we got was, ‘We don’t know,’ ” she said. “It was so difficult because I don’t think anyone had a plan.”

Father Tom Elewaut is pastor of the Mission Basilica San Buenaventura in Ventura, a popular Southern California church wedding venue. He estimates roughly 1 out of every 3 couples who planned to marry at the mission this year have postponed their weddings until 2021 due to the local public gathering restrictions.

In counseling couples trying to decide what to do, Father Elewaut said he encouraged them to see the difficulties as an important part of marriage prep.

“They will face many challenges in their married lives, and this pandemic could possibly strengthen their bond to each other,” Father Elewaut said. “All things are possible with God.” 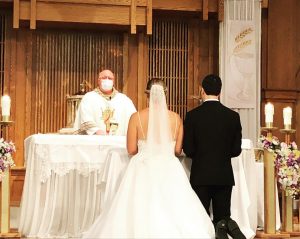 In other states, engaged couples facing the same dilemma discerned a variety of paths forward. Between March and April in Naples, Florida, Kathryn Ruffolo and Philip Allen decided to postpone their reception, even before authorities had imposed limits on social gatherings.

“We were more concerned about the health and safety of people,” the now Kathryn Allen told Angelus. “We knew people would come if we asked them to, but we didn’t really want to put anyone in that position.”

At the time, the couple hoped to keep their April 18 wedding date so that they could still get married in a small ceremony. But the week before, they learned that their church could no longer host them, and it was back to the drawing board.

“We postponed [both the ceremony and reception] indefinitely at that point to October,” said Kathryn, “which we hated.”

More than 900 miles north in Roanoke, Virginia, another April 18 wedding was able to take place as scheduled, but not as planned. At Our Lady of Nazareth Church, Laura Williams and Michael Kotchish married in the presence of just eight other people.

“At the end of the day, the most important thing is that we want to get married,” the new Mrs. Kotchish told Angelus. “Even if we could just have two witnesses, we still wanted to go ahead with it, because that was our main focus.”

While the restrictions at the time limited the religious service to 10, they would have allowed the Kotchishes to have a reception with up to 50 people. But like the Allens, they decided against it out of concern for the health and safety of their family members. 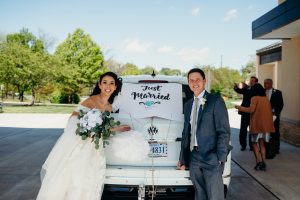 Rather than delay their April 18 wedding, Michael and Laura Kotchish of Roanoke, Virginia, decided to get married in the presence of only eight people. (Submitted photo)

Laura said the hardest part was communicating their decision to guests.

“Sending out that email to our guests, although it was hard, and it was a little disappointing, we were definitely given the graces to get through it.”

Looking beyond her own situation helped Laura stay positive. “Everybody’s getting impacted by COVID … and the last thing that I want to do is just say, ‘Poor me,’ ” she said. “But honestly, that [attitude I had] really comes down to everybody’s prayers and the graces.”

Disappointed at the prospect of waiting at least six more months before getting married, Kathryn and Philip tried to resume their daily routines. But one day in mid-May, an opportunity arose.

“I think it was a week before [May 23],” said Kathryn, “[my mom] saw that the churches were opening back up. She asked us, ‘Do you guys want to do this?’ And we said, ‘Yes, absolutely! We wanted to do this a month ago!’ And so we kind of whirlwind planned … just our intimate ceremony that week and got married, which we actually think was a blessing in disguise.”

While only their immediate families could attend the wedding at St. William Church, Kathryn has no regrets. “It was such a perfect day,” she recalled. “If it were a normal scenario, I would have loved our wedding, and it would have been perfect the way it was. But we got to spend an entire day with our sisters and brothers and family and actually have conversations with the 15 people that were there. It was so intimate and wonderful. I wouldn’t change it if I could.” 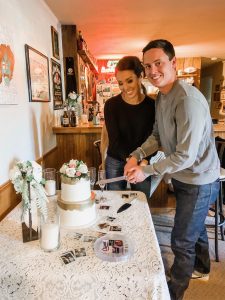 Michael and Laura Kotchish cut the cake at their at-home reception. (Submitted photo)

Laura also found the intimacy of the wedding, as well as the casual nature of their small backyard celebration, an unexpected joy.

“We kind of laugh about it and say that it gave us the opportunity to get out of our ‘monkey suits’ — you know, [Michael had] a suit on, which is so uncomfortable for guys, and my dress was so heavy!” she laughed. “So having the ability to do that and be so comfortable and just feel like ourselves, that was incredible.”

After pursuing and scrapping several potential plans, the Gils and Scanlons finally secured a venue for Krystal and Jack’s wedding at St. Mary Magdalen’s. Although the original July 11 wedding date turned into a much later Sept. 12 ceremony, Krystal says the stress of the past several months seemed to melt away as she processed down the aisle.

The Gils and Scanlons are not alone in loving their small outdoor wedding. At San Buenaventura, Father Elewaut noted, the courtyard ceremonies have proved so successful that “some [couples] are requesting this for weddings in 2021 and beyond.”

Although these requests will need a bishop’s approval after COVID-19 subsides (the Church ordinarily requires weddings to take place within a church sanctuary), the interest suggests that the adjustments and innovations born from COVID-era weddings have proved not just tolerable but appealing.

Laura now promotes small weddings among her friends. When one consulted her about whether to move forward with her own recent wedding, Laura assured her that having an intimate ceremony was “the best decision I ever made.” 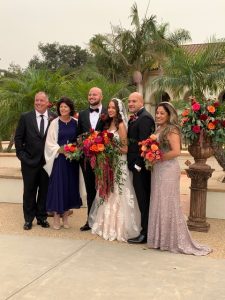 Ever since they met and started dating at Franciscan University in Steubenville, Krystal recalled that she and Jack had always tried to keep their relationship “really Christ-centered.” Today, she credits that time as helping prepare them to lean on prayer throughout their wedding planning process, and for lifting the tone of their wedding day. While she found that the details came together perfectly, there was something much deeper to cherish.

“[Everything that day] looked really pretty,” she said, “but I think at the heart of it, one thing that I saw through this whole experience in getting to our wedding was that we were starting on a really strong foundation because we had to overcome so much adversity.”

For Laura, the simplified wedding plan brought more attention to what lies beyond the wedding day.

“The reception, your dress, your bridesmaids, your groomsmen, they’re all nice to have, but they are not the be-all and the end-all,” she said. “And the question is, what are you doing to prepare for after that day? That’s the most important thing.”