While the report summarizing tens of thousands of U.S. listening sessions in the first phase of the Catholic Church's synodal process has been submitted to the Vatican, the experience of synodality is just beginning.

The country reports, such as the one submitted by the U.S. Conference of Catholic Bishops in August, are part of the two-year preparatory effort leading to the Synod of Bishops on synodality in October 2023 called by Pope Francis.

The pope has invited the church to become more collaborative and that involves listening and walking together -- synodality -- in response to the challenges the world poses to daily life.

"The local work doesn't become obsolete because we published a national synthesis," Bishop Daniel E. Flores of Brownsville, Texas, who is overseeing the effort for the U.S. Conference of Catholic Bishops, told Catholic News Service.

The USCCB released the synthesis Sept. 19. It summarizes the concerns, hopes, pains and desires voiced by an estimated 700,000 participants who joined thousands of listening sessions and other events during the diocesan phase in the lead-up to the Synod of Bishops on synodality in October 2023.

"There are many things that can be addressed immediately. ... There are some issues raised that can be resolved at the local level. We don't have to wait for the outcome of the Synod of Bishops," said Bishop Flores, who chairs the USCCB Committee on Doctrine.

The bishop compared the pope's invitation to synodality to the act of planting a seed. 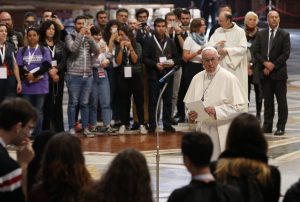 Pope Francis prepares to address young people who participated in a pilgrimage hike from the Monte Mario nature reserve in Rome to St. Peter's Basilica at the Vatican Oct. 25, 2018, during the Synod of Bishops on young people, the faith and vocational discernment. Catholic young people are among the many groups of the faithful worldwide invited to share testimony and talk abut their experience of church during preparations for the 2023 world Synod of Bishops on synodality. (CNS photo/Paul Haring)

"If we can plant the seed once again of being the church that understands its own identity as the body that has many voices but has cohesion that is given by the Holy Spirit, then we're better fit to fulfill our mission in the world, which is a witness that we don't always have to be fighting each other and that we can, at the very least, assist each other in what is a very difficult life," he told CNS.

The synthesis report was developed in much the same manner as the reports prepared by parishes and dioceses: through prayer, listening and inspiration from the Holy Spirit. The team of writers convened by the USSCB gathered in August to discern what common themes emerged in the 290 documents received from throughout the country, two of the coordinators of the effort at the USCCB told CNS.

"There was a lot of listening to the Spirit in the way we went about writing it," said Julia McStravog, a consultant to the bishops on the process.

Richard Coll, executive director of the bishops' Department of Justice, Peace and Human Development, who is coordinating the effort for the USCCB, called the writing process "prayerful and deliberate."

"As Bishop Flores said in his letter to the Vatican, we have really tried to reflect faithfully the statements and views and positions that we have heard," Coll said.

The drafting of the synthesis, McStravog said, involved reviews by several parties, including a team of five bishops who joined Bishop Flores to offer their ideas on making the text "more lucid," but did not change its substance.

McStravog also described how she was struck by "the radical honesty" of the 14 regional reports in particular that resulted from the diocesan submissions.

"When the synod is really embraced it generated this time and place for reflection and sharing and our diocesan folks who led the process were really true to the process and wanted it to go well. I think that is what has come through," McStravog said.

An example of the authenticity McStravog cited is the report's statement that young people have turned away from the church in large numbers because they "perceive the church as hypocritical and failing to act consistently with justice toward these diverse communities."

The report readily discusses issues that give parishioners and nonparishioners alike cause for concern: racism, lingering wounds from the sexual abuse crisis, the pain felt by divorced and remarried Catholics, the marginalization of LGBTQ+ people and their families, and divisiveness largely based on political differences that has seeped into the church from secular society.

Bishop Flores said that early skepticism about the synodal process among some participants "thinking this is another program that we're going to do and we're going to put it on the shelf" gave way to an openness and "peace with it."

He credited the willingness of people to listen and to welcome inspiration from the Holy Spirit for the change of mind.

The next step in preparation for the Synod of Bishops is the continental phase. The North American report will be written by Canadian and U.S. church representatives once the "instrumentum laboris," or working document, to guide continental or regional ecclesial assemblies that will take place by March.

Bishop Flores expects that the synthesis reports generated at the continental level will greatly vary in their message to the church as a whole. He said he understands the invitation to synodality from the pope has being "ultimately about conversion."

"Conversion is the work of the Holy Spirit in that you've got to understand the suffering of the other person and not just a number that you see on a newscast," he told CNS.

"We can learn a lot once the national syntheses and the international ones come out, what the priorities are from some of our poorer parts of the world," he said. "I myself think that a church that is more affluent needs to pay particular attention to how the church that is poor lives its faith and how it hopes because that is something that we desperately need to hear."