Amid the outpouring of comments by religious leaders after the Jan. 6 riot at the U.S. Capitol in Washington, D.C., the statement by Archbishop José H. Gomez of Los Angeles, president of the U.S. Conference of Catholic Bishops, stands out for its welcome brevity as well as its poignancy: “The peaceful transition of power is one of the hallmarks of this great nation. In this troubling moment, we must recommit ourselves to the values and principles of our democracy and come together as one nation under God.”

Still, there’s one sentence — “This [the riot] is not who we are as Americans” — that I would modify as follows: “This is not how we all are, and probably not even how a substantial number of those who were there at the Capitol want to be.”

My point is this: Although some in that crowd of several thousand were troublemakers spoiling for a fight, others were ordinary Americans, some bearing signs and banners of little-known religious groups, who’d come to share in undoing what they had repeatedly been told was the stealing of a presidential election.

True, they were misled. And those who misled them — starting with President Trump and including his allies and de facto collaborators in Congress and the media, especially the peddlers of QAnon conspiracy theories — bear a heavy responsibility for misleading them, and will be judged harshly by history for doing that.

Trump likely didn’t anticipate what happened at the Capitol. But like someone carelessly tossing a match on dry leaves, he is largely to blame for the conflagration that followed. 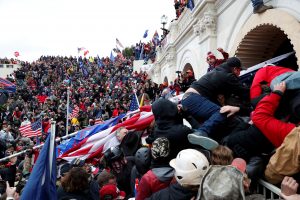 President Donald Trump supporters storm into the U.S. Capitol in Washington, D.C., Jan. 6, during a rally to contest the certification of the 2020 presidential election. (Catholic News Service/Shannon Stapleton, Reuters)

There is, however, consolation in the fact that the decent, deceived people in that crowd imagined they were acting in the service of a just cause — or causes, which for some also included protesting pandemic restrictions.

Nor does the harsh truth that those whom they believed and trusted were charlatans and deceivers alter the all too real sense of alienation — of exclusion from the benefits but not the burdens of society — that set them up for deception.

Just over a week before the events in Washington, the Church celebrated the feast of St. Thomas Becket, a 12th-century archbishop of Canterbury who was killed by knightly thugs acting on behalf of King Henry II. To observe the occasion, I reread “Murder in the Cathedral,” T.S. Eliot’s thought-provoking drama about the martyrdom.

At one point, Archbishop Becket, reflecting on his motives, speaks of the temptation to do “the right thing for the wrong reason.” Many of the Washington demonstrators got it the other way around — they did the wrong thing for what they honestly, though mistakenly, believed to be the right reason. If you’re looking for grounds for hope in what happened, here at least is a smidgeon of hopefulness for the future.

Now surely it is time and then some, as Archbishop Gomez said, to “come together as one nation under God.” But that won’t happen quickly or easily. First it is necessary to confront facts — not only the facts surrounding the events at the Capitol on Jan. 6, but the facts about what preceded it and about the challenges ahead.

Start with the fact that the riot at the Capitol was the culmination (and, God grant, the conclusion) of a horrendous series of traumatic events rocking the United States for many months.

Time and again Americans have agonized at images of demonstrators smashing windows and hurling Molotov cocktails to protest grievances, including police brutality, racial inequality, and — with the toppling of statues of national heroes, Founding Fathers, and sometimes saints — the failings, real and imagined, of forebears who transcended their faults to lay the groundwork for a society committed to liberty and justice.

Sometimes, too, the protesters seemingly turned to violence not so much to protest injustice as to release bottled-up rage. And in this they were mirror images of the mob that invaded the Capitol.

The implications of these disturbing facts are underscored in a new book titled “Divided We Fall” (St. Martin’s Press, $28.99) by conservative commentator David French. He argues that, in the absence of serious remedial steps, the U.S. may be headed toward breakup via secession on the part of one or more states.

Improbable as that may sound, the warning needs to be taken seriously. Notre Dame University political scientist Vincent Phillip Munoz’s statement of the case, in a First Things review of French’s book, has the chilling ring of truth:

“The continued unity of the United States is not certain. America may break apart into two or more nations, because Americans are no longer one people. We lack a common culture, we live separately, we believe in different things, we increasingly loathe our political opponents. And things are only getting worse.” 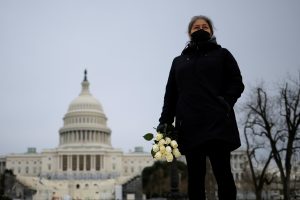 A woman holds flowers near the U.S. Capitol Jan. 8 as she pays her respects to U.S. Capitol police officer Brian Sicknick, who died the night before from injuries he sustained while defending Capitol Hill. (Catholic News Service/Carlos Barra, Reuters)

Which brings us to the ascent of Joe Biden to the presidency.

For people who accept the French-Munoz thesis — or who only worry that it may be right — the fear is that Biden, despite his old shoe, middle-American demeanor, has made common cause with the progressives, with people in universities, foundations, think tanks, federal courts, media, and big corporations egged on by left-leaning interest groups, who seek to reshape American institutions and American values to suit their highly secularized tastes.

To his credit, Biden says that as president he means to work for the restoration of national unity.

“We must unify the country,” he told reporters after the Capitol riot. But his policy agenda, specifically on social issues, clashes with the deeply held convictions of social conservatives, including many in the churches.

For example: Seeking the presidency, Biden repeatedly promised to undo pro-life measures like the Hyde Amendment barring federal funding of Medicaid abortions and the Mexico City policy ruling out aid to groups that support abortion overseas. He said he would seek to make the Supreme Court’s 1973 Roe v. Wade decision legalizing abortion a matter of federal law. And he chose California Sen. Kamala Harris, a pro-choice hardliner, as his running-mate.

All of which points to an obvious question. Beyond talking about national unity, what steps will Biden take to close the gap between him and the significant body of Americans for whom abortion is, as the American bishops call it, a “preeminent” issue?

As of the time of publication, five deaths have been linked to the Capitol riot. That is a tragedy. But every day in America some 1,600 human lives are snuffed out by abortion, with at least the tacit approval of some of the same people who deplore the five riot-linked deaths. As long as that continues, a smoldering source of America’s social divisions will persist, no matter what our pro-choice Catholic president says about restoring national unity.

In the present circumstances, the role of the Catholic Church is both clear and difficult. Setting aside timidity and fear of giving offense, it should serve as a conscience for the nation.

And in doing that, it cannot be selective.

The Church must stand against abortion, capital punishment, nuclear weapons, racial injustice and inequality, the abuse of women and neglect of the elderly, the plague of pornography, and all other offenses against the sanctity and dignity of life. It must defend the traditional family, protect migrants, and resist efforts — whether from the left or from the right — to silence religious voices. And it must call out the hate-mongers, merchants of suspicion, and traffickers in conspiracy theories who obstruct reasoned, respectful discourse and debate.

Recent events have not so much created a national crisis as shone light on the crisis that already existed. If Americans, against the odds, can now come together to address that crisis, the shock and horror at what happened at the Capitol will have served a useful purpose.