Pope Francis named Bishop Ronald A. Hicks as the next bishop of Joliet, Illinois, Friday.

Hicks, 55, has served as Vicar General of the Archdiocese of Chicago since 2015 and as an auxiliary bishop of the archdiocese since 2018.

He will be the sixth bishop of Joliet, succeeding Bishop R. Daniel Conlon, who resigned in May at the age of 71 following a medical leave of absence.

Hicks will be installed Sept. 29 at the Cathedral of St. Raymond Nonnatus in Joliet.

Bishop Richard E. Pates, the apostolic administrator of the diocese, welcomed the appointment.

“The Diocese of Joliet is most grateful to Pope Francis for the appointment of Bishop Ronald Hicks as its sixth bishop,” he said in a July 17 statement.

“The bishop owns a reputation for pastoral leadership and is totally committed to the ongoing renewal of the Catholic Church. He is a worthy successor to Bishop Conlon and his predecessors.”

In a video posted on the Diocese of Joilet’s website, Hicks said that he immediately accepted the appointment when he was contacted by Archbishop Christophe Pierre, the Apostolic Nuncio to the United States.

Pierre then asked him if he knew where Joliet is.

“I said: ‘Yes, I do know where Joliet is.’ I am just humbled and delighted and excited to be named there. What a vibrant diocese -- so many wonderful things going on in the name of the Lord -- and to be a part of this and to be assigned here, what a beautiful call and gift,” he said.

Hicks, a native of Harvey, Illinois, was born on August 4, 1967. He graduated from Quigley Seminary South in 1985. Four years later he gained a B.A. in Philosophy from Niles College of Loyola University Chicago. He earned a Master of Divinity degree in 1994 and Doctor of Ministry degree in 2003 at the University of St. Mary of the Lake in Mundelein.

He was an associate pastor at Our Lady of Mercy Parish in Chicago from 1994 to 1996, then served at St. Elizabeth Seton Parish in Orland Hills until 1999.

He was then appointed Dean of Formation at St. Joseph College Seminary, a post he held until 2005, when he began a five-year term as Regional Director of Nuestros Pequeños Hermanos (NPH) in Central America. Based in El Salvador, he oversaw the care of more than 3,400 orphaned and abandoned children in nine Latin American and Caribbean countries. 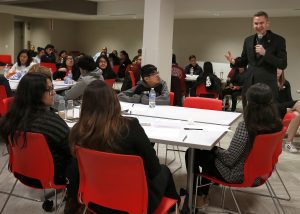 He returned to Chicago in 2010 to serve as Dean of Formation at Mundelein Seminary.

On January 1, 2015, Cardinal Blase Cupich appointed him Vicar General of the archdiocese. He was ordained as an auxiliary bishop at Holy Name Cathedral in Chicago on Sept. 17, 2018.

The diocese serves 616,000 Catholics across 118 parishes and seven missions in DuPage, Will, Kendall, Grundy, Kankakee, Ford and Iroquois counties in Illinois.