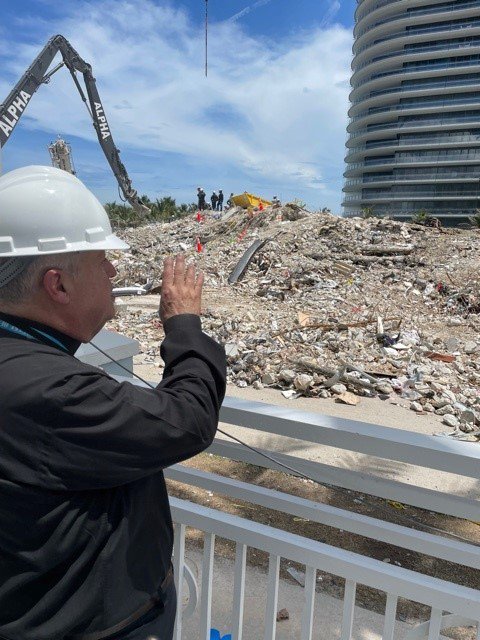 Father Juan Sosa, pastor of St. Joseph Church, prays at the site of the partially collapsed Champlain Towers South in Surfside, Fla., July 2, 2021, which he visited with Archbishop Thomas G. Wenski of Miami and Boston Cardinal Sean P. O'Malley that same day. The church is located two blocks west of the site. The parts of the building that remained standing were demolished the night of July 4. (CNS photo/handout via Florida Catholic)

After spending time at Surfside's informal Wall of Remembrance memorial for the victims of the Champlain Towers South collapse, Miami Archbishop Thomas G. Wenski told CBS4 Miami July 2, "It's quite shocking to see."

He made the comments during his visit to the memorial with Boston Cardinal Sean P. O'Malley and Father Juan Sosa, pastor of St. Joseph Church, which is close to the site.

"The people in the building represent so many different religious and cultural backgrounds. ... One of the things that struck me really is when I've been reading the names of the families, survivors and the missing of how much this building represents a microcosm of all of South Florida," the archbishop said.

The memorial sprung up following the tragic partial collapse of the Champlain Towers South condo building near Miami Beach, Florida. It has been so popular that at one point local law enforcement had to close the area due to hundreds gathering on the streets there.

As of July 6, 32 people were confirmed dead; 113 others remained unaccounted for since the collapse early June 24. The evening of July 4, crews demolished the remaining part of the building.

Officials were concerned the outer bands of Tropical Storm Elsa could affect what was left of the building in Surfside. By midday July 6, Elsa was expected to head toward Florida's west coast after whipping parts of the Florida Keys.

"This has certainly been a very difficult and emotional moment for the whole community. But even in these times of great challenge, we see how so much good comes out of people -- in their generosity, courage and desire to help those in need," Cardinal O'Malley wrote in a post for his blog.

He said he headed to Miami July 1 to spend time with friends and relatives for the Independence Day holiday and Archbishop Wenski extended an invitation to join him in visiting the site of the building collapse in Surfside, "where so many people perished."

"We prayed for those affected by the tragedy and met some of the relatives of those who are still missing," Cardinal O'Malley wrote.

"It was a very moving experience," he said of the visit, "but it was encouraging to see how the community has come together to help in the search for the missing and to try to bring comfort and solace to those who have lost family and friends."

"We were also able to speak with a number of the rescue workers from around the country and from Israel who were working at the site of the collapse. I even met a firefighter from Newton (Massachusetts) who was there helping out," he added.

Cardinal O'Malley noted that Father Chris Marino, a Miami archdiocesan priest, who is a chaplain with the Miami Fire Department, is a good friend of his and was with the firefighter who was with the crew that found the body of his own 7-year-old daughter, Stella Cattarossi, the night of July 1. The firefighter carried her from the rubble.

The girl had been with her mother, grandparents and an aunt visiting from Argentina, according to news reports.

"On behalf of the Archdiocese of Boston, we also offer our prayers and support for the families impacted by the collapse," Cardinal O'Malley said. "We know that God does not abandon us in our time of need. He is always present in our hour of grief." 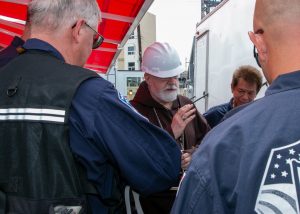 Boston Cardinal Sean P. O'Malley blesses search and rescue personnel from other parts of the U.S., who were working at the site of the collapsed Champlain Towers South in Surfside, Fla., July 2, 2021. (CNS photo/Ana Rodriguez-Soto, Florida Catholic)

Father Sosa's parish church, the nearest Catholic church to Surfside's "ground zero," is serving as a place of spiritual respite for members of the Surfside/Miami Beach community -- both Catholic and non-Catholic -- who have been affected in some way by the tragic partial collapse of the Champlain Towers South condominium.

St. Joseph also is accommodating fire rescue personnel and journalists from around the world who are parking or camped out on its premises.

The church remains open daily from 8 a.m. -- when Mass is celebrated -- until the conclusion of the last Mass each day.

On the evening of June 26, teens, young adults and others in the parish community gathered at the church for eucharistic adoration, rosary, songs and reflections, followed by a solemn walk to the site.

"Our hearts go out to all those affected by the tragedy," Archbishop Wenski said in a statement issued shortly after the building collapsed. "We also pledge our prayers for the victims, their families, and first responders. May the Lord give them strength.

Catholic Charities of the Archdiocese of Miami staffers have been offering assistance in whatever way they can, along with Father Sosa, other local clergy and faith leaders, and local parishioners.