An undercover KGB agent tried to befriend ex-cardinal Theodore McCarrick in the early 1980s, prompting the FBI to ask the rising churchman to exploit this connection to counter Soviet intelligence, according to claims in the Vatican’s report on McCarrick released Tuesday.

The Nov. 10 McCarrick Report offers detail on McCarrick’s church career and the sexual abuse his successful personality helped to conceal.

“In the early 1980s, a KGB agent who enjoyed diplomatic cover as the Deputy Chief of Mission to the United Nations for the Soviet Union approached McCarrick, apparently to attempt to befriend him,” read a footnote in page 34 of the report, released by the Vatican Nov. 10. “McCarrick, who was initially unaware that the diplomat was also a KGB agent, was contacted by agents of the FBI, who asked him to serve as a counterintelligence asset with respect to the activities of the KGB.”

“Though McCarrick believed it was best to decline such involvement (particularly because he was immersed in the organization of the new Diocese of Metuchen), the FBI persisted, contacting McCarrick again and encouraging him to allow a relationship with the KGB agent to develop,” the report continued.

McCarrick had been an auxiliary bishop of New York City from, and became the first bishop of the newly created Diocese of Metuchen, New Jersey in 1981. He would become Archbishop of Newark in 1986, then Archbishop of Washington in 2001.

“Laghi thought that McCarrick should ‘not be negative’ about the possibility of serving as an FBI asset and described McCarrick in an internal note as someone who ‘knows how to deal with these people and be cautious’ and who was ‘wise enough to understand and not be caught’,” said the report.

The compilers of the McCarrick Report say the rest of the story is not known to them.

“It is not clear, however, whether McCarrick ultimately accepted the FBI’s proposal, and no record reflects further contact with the KGB agent,” said the report.

Former FBI director Louis Freeh said in an interview cited in the report that he was not personally familiar with the incident. However, he said that McCarrick would have been “a very high value target for any of the (intelligence) services, but particularly the Russians at that time.”

The McCarrick Report cites Freeh’s 2005 book, “My FBI: Bringing Down the Mafia, Investigating Bill Clinton, and Waging War on Terror,” in which he described Cardinal John O’Connor’s “great efforts, prayers and real help to dozens of FBI agents and their families—especially to me.”

“Later, Cardinals McCarrick and Law continued this special ministry to the FBI family, who revered both of them,” Freeh’s book said, referring to former Archbishop of Boston Cardinal Bernard Law.

In the Cold War era, prominent Catholic leaders in the U.S. tended to strongly back the FBI for its work against communism. Cardinal Francis Spellman, who ordained McCarrick to the priesthood in 1958, was a well-known supporter of the FBI, as was Archbishop Fulton Sheen, whom McCarrick came to know after Sheen’s 1969 retirement from the Diocese of Syracuse.

Years after McCarrick’s encounter with the KGB agent and the FBI request for assistance, McCarrick would refer to the FBI anonymous letters which alleged he was engaging in sexual misconduct. He denied these accusations, though his victims who later came forward have indicated he was sexually abusing boys and young men as early as 1970, as a priest of the New York archdiocese.

The McCarrick Report indicates that McCarrick would emphatically deny the allegations, while seeking law enforcement help to respond to them.

In 1992 and 1993 an unknown author or authors circulated anonymous letters to leading Catholic bishops accusing McCarrick of sexual abuse. The letters did not name specific victims or present any knowledge of a specific incident, though they suggested his “nephews”--young men McCarrick frequently singled out for special treatment--were potential victims, the McCarrick Report states.

An anonymous letter sent to Cardinal O’Connor, dated Nov. 1, 1992, postmarked from Newark and addressed to National Conference of Catholic Bishops members, claimed imminent scandal from McCarrick’s misconduct, which it alleged was “common knowledge in clerical and religious circles for years.” The letter claimed that civil charges of “pedophilia or incest” were imminent regarding McCarrick’s “overnight guests.” 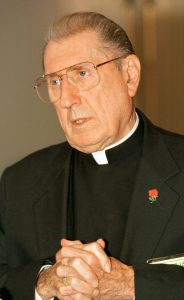 Cardinal John O'Connor of New York is pictured in Washington in this 1999 file photo. A Vatican report about former Cardinal Theodore E. McCarrick states that Cardinal O'Connor wrote a letter in October 1999 about allegations against then-Archbishop McCarrick and that this letter was given to Pope John Paul II. (CNS photo/Nancy Wiechec)

After O’Connor sent the letter to McCarrick, McCarrick indicated he was investigating.

“You might want to know that I have shared (the letter) with some of our friends in the FBI to see if we can find out who is writing it,” McCarrick said to O’Connor in a Nov. 21, 1992 response. “I am afraid he is a sick person and someone who has a lot of hate in his heart.”

A Newark-postmarked anonymous letter, dated Feb. 24, 1993 and sent to O’Connor, accused McCarrick of being a “cunning pedophile,” without naming specifics, and also claiming that this had been known for decades by “authorities here and in Rome.”

In a March 15, 1993 letter to O’Connor, McCarrick again cited his consultations with law enforcement.

“When the first letter arrived, after discussion with my vicars general and auxiliary bishops, we shared it with our friends in the FBI and local police,” McCarrick said. “They predicted that the writer would strike again and that he or she was someone whom I may have offended or crossed in some way but someone probably known to us. The second letter clearly supports that supposition.”

“These letters, which presumably are written by the same person, are unsigned and obviously very annoying,” he said. “On each occasion, I have shared them with my auxiliary bishops and vicars general and with our friends in the FBI and the local police.”

The McCarrick Report said that the anonymous letters “appear to have been viewed as libelous attacks made for improper political or personal motives” and did not result in any investigation.

When Pope John Paul II was considering whether to name McCarrick as Archbishop of Washington, Cacciavillan considered McCarrick’s report about the accusations to be a point in McCarrick’s favor. He specifically cited the Nov. 21, 1992 letter to O'Connor.

By 1999, Cardinal O’Connor had come to believe McCarrick might be guilty of some kind of misconduct. He asked Pope John Paul II not to name McCarrick as O’Connor’s successor in New York, citing allegations that McCarrick shared beds with seminarians, among other rumors and allegations.

The report depicts McCarrick as an ambitious workaholic and a cunning personality, at ease in circles of influence and establishing contacts with political and religious leaders. He spoke several languages and would serve on delegations for the Vatican, the U.S. State Department, and NGOs. He would at times accompany Pope John Paul II during his travels.

“During his time as ordinary of the Archdiocese of Newark, McCarrick made numerous contacts in state and federal law enforcement,” said the Vatican report. Thomas E. Durkin, described as McCarrick’s “well-connected New Jersey attorney,” helped McCarrick meet the leaders of the New Jersey State Troopers and the head of the FBI in New Jersey.

A priest who formerly served as a New Jersey police officer said McCarrick’s relationship “was not atypical since relations between the Archdiocese and Newark police have historically been close and cooperative.” McCarrick himself was “comfortable among law enforcement,” according to the McCarrick report, which said his uncle was a captain in his police department and later headed a police academy. 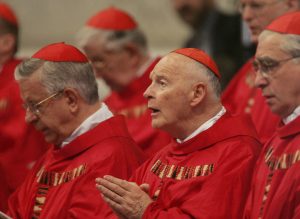 Then-Cardinal Theodore E. McCarrick sings during Mass for the Election of the Roman Pontiff in St. Peter's Basilica at the Vatican in this April 18, 2005, file photo. Cardinal McCarrick was an elector during the 2005 conclave that elected Pope Benedict XVI. (CNS photo/Nancy Wiechec)

As for McCarrick’s encounter with a KGB agent undercover at the United Nations, the story is just one of many provocative incidents involving the influential churchman.

Monsignor Dominic Bottino, a priest of the Diocese of Camden, described an incident at a catering hall in Newark in January 1990 in which McCarrick appeared to ask his help in obtaining privileged information about bishops’ appointments in the U.S.

Camden’s then-new Bishop James T. McHugh, then-Auxiliary Bishop John Mortimer Smith of Newark, McCarrick, and a young priest whose name Bottino could not recall attended a small dinner in celebration of McCarrick's consecration of Smith and McHugh as bishops. Bottino was surprised to learn that he had been selected to become an attache at the Holy See's Permanent Observer Mission to the United Nations.

“Placing his hand on Bottino’s arm, McCarrick asked whether he could 'count on' Bottino once he became the attaché to provide him with information from the pouch,” the Vatican report said. “After Bottino stated that it would seem that the material in the pouch needed to remain confidential, McCarrick patted his arm and replied, 'You’re good. But I think I can count on you'.”

Not long after this exchange, Bottino said, he witnessed McCarrick grope the crotch area of the young priest sitting next to him at the dinner table. The young priest appeared “paralyzed” and “terrified.” McHugh then abruptly stood up “in a sort of panic” and said he and Bottino had to leave, perhaps only 20 minutes after their arrival.

There is no evidence that Smith or McHugh reported the incident to any Holy See official, including the apostolic nuncio.

People's mistakes and sins do not frighten God, pope says at audience

Pope calls for prayers for people hit by disaster in Tonga

U.S. bishop with a Salvadoran heart weighs in on historic beatifications