Growing up in Brazil, Stela Ishitani Silva had an early curiosity about exploring the heavens. As a teenager, her interest morphed into how the universe worked and the field of astrophysics.

And she began imagining working at NASA.

"It felt like a very distant dream," she said.

Friends and teachers encouraged her to pursue her dream, and although thinking it was a long shot, Ishitani Silva did.

Her path led in 2017 to The Catholic University of America in Washington and a position alongside NASA scientists at the Goddard Space Flight Center in nearby Greenbelt, Maryland.

These days Ishitani Silva is working on the detection of exoplanets -- bodies orbiting distant stars in the Milky Way galaxy.

"I love it," she told Catholic News Service. "I get so excited. It is something new."

NASA recently announced a $178 million extension of the contract through March 2027 with the center. It will allow the participating institutions to continue hiring undergraduate and graduate students, some of whom are pursuing doctoral studies, to work at Goddard in a variety of research projects tied to NASA's space exploration goals.

Catholic University's share is $27 million. It is one of the largest research awards in university history, school officials said.

The university has been part of the center since it was established in 2017 and received $8 million of the $87.5 million initial four-year NASA grant.

For Ishitani Silva, exoplanet detection is the subject of her doctoral thesis, which she plans to defend next spring.

The task involves analyzing huge quantities of data gathered from observations by the Transiting Exoplanet Survey Satellite. Surveying 200,000 of the brightest stars near the sun, the satellite is able to record infinitesimal changes in light levels as a body passes in front of a star.

Ishitani Silva is included as an author of a paper that has been accepted for publication in The Astrophysical Journal that describes the work that detected 181 exoplanet candidates.

Tommy Wiklind, a faculty member in Catholic University's Institute for Astrophysics and Computational Sciences and associate director of the center, said the program helps cement the school's reputation as an important contributor to humankind's understanding of the galaxy and the universe.

"For the university, it attracts students who want to come and work directly with NASA and Goddard. They can come to us and fulfill their goals," he told CNS. 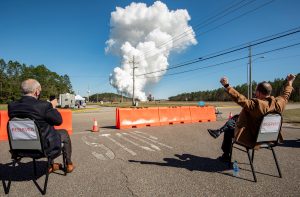 A hot fire test of the core stage of a Boeing-built rocket for Artemis missions that aim to return U.S. astronauts to the moon by 2024 is seen at NASA's Stennis Space Center near Bay St. Louis, Miss., March 18, 2021. (CNS photo/NASA, Robert Markowitz, Handout via Reuters)

The students' work under the program has been on the cutting edge of scientific discovery, said Steve Kraemer, institute director.

He pointed to their research on gravitational waves, which were theorized by Albert Einstein over 100 years ago but not detected until 2015, as well as stellar astrophysics and X-ray astrophysics in understanding the birth, life and death of stars, planets, galaxies and other objects.

In total the university has hired 25 research staff since 2017, Kraemer said, and the contract extension will allow for additional hires.

Ishitani Silva enrolled at Catholic University after learning that scientists in Goddard's Exoplanets and Stellar Astrophysics Group were looking for students to conduct research into the existence of planets beyond the solar system. She holds a bachelor's degree in physics from the Federal University of Minas Gerais in Brazil.

The prospect of working with NASA was one she said she could not ignore.

"It's a great opportunity for me to be at CUA to have this connection and to be working with something I like. It's not just astrophysics in general. I am super interested in exoplanets," Ishitani Silva said.

Her new research project involves the detection of exoplanets through gravitational microlensing -- seeing the light from a more distant star and planetary system that appears temporarily brighter because it is magnified by the gravity of a closer star.

"It's the new exoplanet discovery technique," she said.

The work involves analyzing data from the Microlensing Observations in Astrophysics telescope in New Zealand. One discovery of a possible exoplanet using the process occurred last summer and is the subject of paper Ishitani Silva co-wrote with Goddard scientist David Bennett set to be published later this year.