Pope John Paul II, Pope Benedict XVI, and Pope Francis each made apostolic visitations to the United States during the course of their pontificates. As the United States celebrates Independence Day, CNA remembers words to America from each of those popes:

September 24, 2015, Address to a joint session of Congress

….I think of the political history of the United States, where democracy is deeply rooted in the mind of the American people. All political activity must serve and promote the good of the human person and be based on respect for his or her dignity. “We hold these truths to be self-evident, that all men are created equal, that they are endowed by their Creator with certain unalienable rights, that among these are life, liberty and the pursuit of happiness” (Declaration of Independence, 4 July 1776). 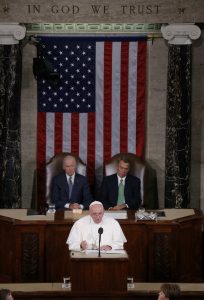 Pope Francis addresses a joint meeting of the U.S. Congress as Vice President Joe Biden (left) and Speaker of the House John Boehner look on in the House of Representatives Chamber at the U.S. Capitol in Washington Sept. 24, 2015. (CNS photo/Jim Bourg, Reuters)

If politics must truly be at the service of the human person, it follows that it cannot be a slave to the economy and finance. Politics is, instead, an expression of our compelling need to live as one, in order to build as one the greatest common good: that of a community which sacrifices particular interests in order to share, in justice and peace, its goods, its interests, its social life. I do not underestimate the difficulty that this involves, but I encourage you in this effort.

How essential the family has been to the building of this country! And how worthy it remains of our support and encouragement! Yet I cannot hide my concern for the family, which is threatened, perhaps as never before, from within and without. Fundamental relationships are being called into question, as is the very basis of marriage and the family. I can only reiterate the importance and, above all, the richness and the beauty of family life.

In particular, I would like to call attention to those family members who are the most vulnerable, the young. For many of them, a future filled with countless possibilities beckons, yet so many others seem disoriented and aimless, trapped in a hopeless maze of violence, abuse and despair. Their problems are our problems. We cannot avoid them. We need to face them together, to talk about them and to seek effective solutions rather than getting bogged down in discussions. At the risk of oversimplifying, we might say that we live in a culture which pressures young people not to start a family, because they lack possibilities for the future. Yet this same culture presents others with so many options that they too are dissuaded from starting a family.

A nation can be considered great when it defends liberty as Lincoln did, when it fosters a culture which enables people to “dream” of full rights for all their brothers and sisters, as Martin Luther King sought to do; when it strives for justice and the cause of the oppressed, as Dorothy Day did by her tireless work, the fruit of a faith which becomes dialogue and sows peace in the contemplative style of Thomas Merton.

In these remarks I have sought to present some of the richness of your cultural heritage, of the spirit of the American people. It is my desire that this spirit continue to develop and grow, so that as many young people as possible can inherit and dwell in a land which has inspired so many people to dream.

I am happy to be here as a guest of all Americans. I come as a friend, a preacher of the Gospel and one with great respect for this vast pluralistic society. America’s Catholics have made, and continue to make, an excellent contribution to the life of their country. As I begin my visit, I trust that my presence will be a source of renewal and hope for the Church in the United States, and strengthen the resolve of Catholics to contribute ever more responsibly to the life of this nation, of which they are proud to be citizens. 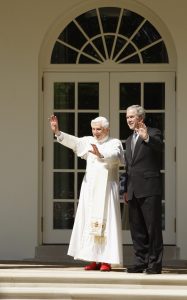 From the dawn of the Republic, America’s quest for freedom has been guided by the conviction that the principles governing political and social life are intimately linked to a moral order based on the dominion of God the Creator. The framers of this nation’s founding documents drew upon this conviction when they proclaimed the “self-evident truth” that all men are created equal and endowed with inalienable rights grounded in the laws of nature and of nature’s God.

The course of American history demonstrates the difficulties, the struggles, and the great intellectual and moral resolve which were demanded to shape a society which faithfully embodied these noble principles. In that process, which forged the soul of the nation, religious beliefs were a constant inspiration and driving force, as for example in the struggle against slavery and in the civil rights movement. In our time too, particularly in moments of crisis, Americans continue to find their strength in a commitment to this patrimony of shared ideals and aspirations.

Freedom is not only a gift, but also a summons to personal responsibility. Americans know this from experience – almost every town in this country has its monuments honoring those who sacrificed their lives in defense of freedom, both at home and abroad. The preservation of freedom calls for the cultivation of virtue, self-discipline, sacrifice for the common good and a sense of responsibility towards the less fortunate. It also demands the courage to engage in civic life and to bring one’s deepest beliefs and values to reasoned public debate.

In a word, freedom is ever new. It is a challenge held out to each generation, and it must constantly be won over for the cause of good (cf. Spe Salvi, 24). Few have understood this as clearly as the late Pope John Paul II. In reflecting on the spiritual victory of freedom over totalitarianism in his native Poland and in eastern Europe, he reminded us that history shows, time and again, that “in a world without truth, freedom loses its foundation”, and a democracy without values can lose its very soul (cf. Centesimus Annus, 46).

Those prophetic words in some sense echo the conviction of President Washington, expressed in his Farewell Address, that religion and morality represent “indispensable supports” of political prosperity.

America the beautiful! So you sing in one of your national songs. Yes, America, you are beautiful indeed, and blessed in so many ways:

- in your majestic mountains and fertile plains;
- in the goodness and sacrifice hidden in your teeming cities and expanding suburbs;
- in your genius for invention and for splendid progress;
- in the power that you use for service and in the wealth that you share with others;
- in what you give to your own, and in what you do for others beyond your borders;
- in how you serve, and in how you keep alive the flame of hope in many hearts;
- in your quest for excellence and in your desire to right all wrongs.

Yes, America, all this belongs to you. But your greatest beauty and your richest blessing is found in the human person: in each man, woman and child, in every immigrant, in every native-born son and daughter.

For this reason, America, your deepest identity and truest character as a nation is revealed in the position you take towards the human person. The ultimate test of your greatness in the way you treat every human being, but especially the weakest and most defenseless ones.

The best traditions of your land presume respect for those who cannot defend themselves. If you want equal justice for all, and true freedom and lasting peace, then, America, defend life! All the great causes that are yours today will have meaning only to the extent that you guarantee the right to life and protect the human person:

- feeding the poor and welcoming refugees;
- reinforcing the social fabric of this nation;
- promoting the true advancement of women;
- securing the rights of minorities;
- pursuing disarmament, while guaranteeing legitimate defense; all this will succeed only if respect for life and its protection by the law is granted to every human being from conception until natural death.

Every human person - no matter how vulnerable or helpless, no matter how young or how old, no matter how healthy, handicapped or sick, no matter how useful or productive for society - is a being of inestimable worth created in the image and likeness of God. This is the dignity of America, the reason she exists, the condition for her survival-yes, the ultimate test of her greatness: to respect every human person, especially the weakest and most defenseless ones, those as yet unborn. 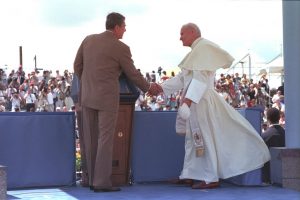 With these sentiments of love and hope for America, I now say goodbye in words that I spoke once before: "Today, therefore, my final prayer is this: that God will bless America, so that she may increasingly become - and truly be - and long remain one Nation, under God, indivisible. With liberty and justice for all"