Bishop Shelton J. Fabre's recent call to fast in response to racism on the feast of St. Peter Claver, Sept. 9, was a call to be attentive to the inequalities across society and acknowledge the sin of racism that continues to exist.

The day was chosen because St. Peter Claver is known as the "apostle to the slaves," Bishop Fabre told Catholic News Service in an email.

The saint ministered for more than three decades in the 17th century to Black people forcibly transported from Africa to Colombia as part of the slave trade.

The invitation from the bishop of Houma-Thibodaux, Louisiana, who chairs the U.S. bishops' Ad Hoc Committee Against Racism, came Aug. 27, four days after a white police officer in Kenosha, Wisconsin, shot an unarmed Black man in the back seven times during an altercation.

Jacob Blake, the injured man, remained hospitalized Sept. 9 and is partially paralyzed. Police officer Rusten Shesky is accused of the shooting. He and two other officers are on administrative leave. The Justice Department has opened an investigation into the shooting.

The incident led to a series of demonstrations that have been largely peaceful after some initial violence. It followed other incidents in which Black people have been killed or injured by white police officers. 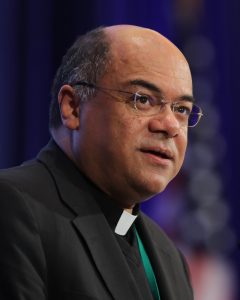 Bishop Shelton J. Fabre of Houma-Thibodaux, La., chair of the U.S. Conference of Catholic Bishops' Ad Hoc Committee Against Racism, speaks Nov. 13, 2019, during the USCCB's fall general assembly in Baltimore. In his call to fast in response to racism on the feast of St. Peter Claver, Sept. 9, 2020, he urged Catholics to be attentive to the inequalities across society and acknowledge the sin of racism that continues to exist. (CNS photo/Bob Roller)

Bishop Fabre said the Wisconsin incident and others illustrate the need for people of faith to "reiterate the value of those whose human life and dignity in this country are marginalized through racism and our need to fight for them including the unborn."

In his email, the bishop also invited people to regularly fast for racial justice beyond the feast day "because I know this would strengthen us for the task that is ours to seek to end the attack against the dignity and sanctity of human life that is racism."

He said fasting, when entered into correctly, "connects us to something greater than ourselves, namely God and the community of the church, and we are called as disciples of Jesus Christ to live in unity, peace and harmony with our brothers and sisters."

Fasting to address social justice is a long-standing tradition throughout the Catholic Church and beyond. The act of fasting is mentioned more than 70 times in Scripture, in both the Old Testament and New Testament. Jesus began his public ministry soon after a 40-day fast in the desert during which Satan tempted him with riches and fame.

Yet fasting, other than the Lenten call to abstain from meat on Fridays and to eat just one full meal on Ash Wednesday and Good Friday, has been a largely overlooked practice of prayer and repentance in contemporary times.

Bishop Fabre described fasting as being about self-denial and an interruption in something as basic as eating for nourishment.

"This interruption to our normal course of eating during a day reminds us to seek to strengthen our relationship to God and to the community of the faithful," he said.

People who have engaged in fasting in response to various injustices -- capital punishment, abortion, the nuclear arms race and gun violence -- said they have done so in an attempt to understand how God is working through them in the world.

Art Laffin, a member of the Dorothy Day Catholic Worker community in Washington, has fasted at various times in his life. In 1978 he joined a liquid-only fast that lasted 37 days as the United Nations met in special session to discuss nuclear disarmament.

He also fasted for 10 days in a Missouri jail in 1985 following another nuclear weapons vigil and at other times to end capital punishment, stop gun violence and to call for the release of Muslim men being held at the U.S. military prison in Guantanamo Bay, Cuba.

He said the practice "has helped me experience the transforming power of God's amazing grace."

"Fasting for me is an act of prayer. You never know how God's going to respond," Laffin said.

"It really comes out of my faith conviction and reflecting on the life of Jesus and realizing before he began his public ministry the Spirit drew him to the desert for 40 days. That's paramount and in order for me to really understand what it means in Jesus' proclamation to believe in the Gospel," Laffin told CNS.

Fasting is a part of the call to discipleship and to be "saints in this generation," said Father Josh Johnson, director of the Office of Vocations in the Diocese of Baton Rouge, Louisiana.

Jesus, the priest explained, invites people to "repent and believe in the Gospel" and such work involves fasting. "What Jesus is inviting us to do is an opportunity to do penance, not just for our own repentance but also repentance for others," he said.

Fasting to end racism is an important step for people of faith to undertake and Father Johnson said he would like to see the practice extend beyond Sept. 9.

"When all Catholics come together and begin to address those practices and policies that are racist, then what we are going to see is real healing in our church, in America and a healing of our nation," he said. 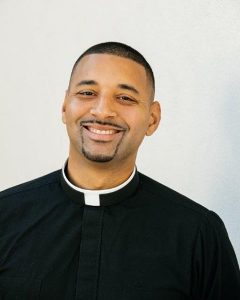 Father Johnson added that fasting can be more than avoiding food and can entail such action as remaining silent while listening to other people share their experiences of racism or another injustice.

"You can bring the practice of 'lectio divina' to the conversation. Think about what the person said and ask for the Holy Spirit to inspire me to learn more on how I can go back to that person and collaborate and bring about God's kingdom on earth as it is in heaven," said the priest who is pastor of Our Lady of the Holy Rosary Parish in St. Amant, Louisiana.

Bishop Fabre said that fasting, in this case in response to racism, can serve to remind the individual "of our own mortality, of the gift of all human life to each of us."

"Fasting for an end to racism reminds us to focus and reflect upon the presence of racism in both individual hearts and actions as well as social structures," he said, "and how we must seek in constructive ways to dismantle racism."