Not many may notice the Diocese of Fairbanks, Alaska, is being removed from the list of missionary dioceses around the world dependent on the Congregation for the Evangelization of Peoples.

But Fairbanks Bishop Chad W. Zielinski hopes the move will catch the attention of other U.S. bishops and spur them to heed Pope Francis' call for more missionary disciples to serve places such as his diocese.

On Nov. 11, the Vatican announced this change for the Fairbanks Diocese, and it will now be under the direction of the Congregation of Bishops.

Some hope the move for Fairbanks will lead to greater collaboration with the U.S. Conference of Catholic Bishops, which is from now on responsible for diocese's missionary, pastoral and economic concerns. One of the greatest of those concerns, said Bishop Zielinski, is the shortage of priests.

He told Catholic News Service the hope is that others will "embrace the reality that we're still a mission diocese and we have missionary needs. We only have 18 priests serving 46 parishes. Three of those priests are over the age of 70. One of them is over the age of 90. So, we have a crisis, a clergy crisis."

There's also a need for men and women religious to serve in the great expanse of his region in Alaska, he said during an interview in Baltimore, where he was attending the U.S. bishops' fall general assembly.

"We welcome men and religious in the diocese, too," he said. "That's the huge thing that we're facing right now, is a priest shortage and it's not easy because you're talking Arctic environment in all of these remote areas are in northern Alaska."

He said the need is for priests as well as women and men religious, "somebody that has a missionary zeal, that has a resilience to live in a challenging environment," he said.

And he's hoping the change will help.

"What my hope is, it's that as Pope Francis continues to echo time and time again the missionary invitation to action of the church, that the U.S. Conference of Catholic Bishops would see the ongoing need of this missionary activity right here within our own country, by serving the indigenous peoples of the state of Alaska in these remote villages."

Since its first diocese was established in the mid-1950s, Alaska has been mission territory, he said, and at that time, like many dioceses of the United States, fell under the watch of the Vatican's Congregation for the Propagation of the Faith, as the Congregation for the Evangelization of Peoples was once called.

"The primary mission of that, as it was established, was to evangelize, to tell the story of the Gospel, bring the message of Jesus Christ to people that were not aware of it," Bishop Zielinski said. "As time continued to move forward, however, various dioceses moved (under) the Congregation for Bishops."

Fairbanks, however, remained within the Congregation for the Propagation of the Faith because of its unique mission work in northern Alaska serving native villages in 46 parishes, 37 of them located in remote native Alaskan villages, primarily, Eskimo or native Alaskan, Bishop Zielinski said. 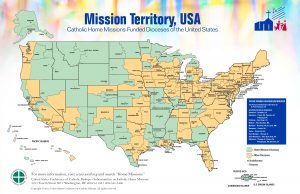 Mission territories are highlighted in green on this 2015 map of the United States and its island territories. The Diocese of Fairbanks, which will continue to receive support from other U.S. dioceses, no longer answers to the Vatican Congregation for the Evangelization of Peoples. (CNS photo/courtesy Catholic Home Missions, U.S. bishops' Office of National Collections)

He proposed the move after conversations with other church leaders, particularly with counterparts in the Canadian conference facing similar challenges, who committed more resources, human and otherwise, to help the mission dioceses.

The Diocese of Fairbanks, the geographically largest U.S. diocese, was established in 1962. According to Vatican statistics, as of Dec. 31, 2017, the diocese had almost 12,500 Catholics, 46 parishes, 12 diocesan priests, five religious order priests and 27 permanent deacons.