New Philadelphia archbishop says Church must be 'sign of hope'

The hope of Christ is far more profound than hope as the world defines it, Archbishop Nelson Perez said during his homily at his installation Mass as Archbishop of Philadelphia on Tuesday.

“Hope is the confident expectation of what God has promised, and its strength is in his faithfulness. That’s hope,” Perez said.

He said that he chose “Jesus: Hope for the World” as the theme of the celebration of his installation.

During a Feb. 18 Mass at the Cathedral Basilica of Sts. Peter and Paul in Philadelphia, Archbishop Nelson Perez was installed as the 14th bishop and 10th archbishop of the Archdiocese of Philadelphia, succeeding Archbishop Charles Chaput, who is retiring.

Besides Chaput and Perez, the Mass was attended by Archbishop Christophe Pierre, Apostolic Nuncio to the United States, as well as Catholics, priests, and bishops from the area and from throughout the U.S., including from the Diocese of Rockville Centre, New York, where Perez had served as auxiliary bishop, and the Diocese of Cleveland, where Perez most recently served as bishop.

After he addressed and thanked the other bishops and priests in attendance, as well as his family, the people of Cleveland, and city officials, among others, Perez focused on the theme “Jesus Christ: Hope for the World.”

“What is hope, and what does hope look like? We know what the definition of hope is like in a dictionary...a feeling of expectation, a desire for a certain thing to happen, that’s how the dictionary defines it,” he said. 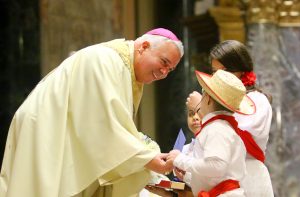 Philadelphia Archbishop Nelson J. Perez receives gifts from children from the Neocatechumenal Way during his installation Mass at the Cathedral Basilica of SS. Peter and Paul in Philadelphia Feb. 18, 2020. (CNS photo/Sarah Webb, CatholicPhilly.com)

The word “hope” is used often, which can lead Christians to forget its Christian definition, Perez added.

“We say I hope you have a good day, I hope it doesn’t rain...I hope the Phillies win the World Series, and the Eagles the Super Bowl next year right?” he said. “Sometimes hope is just wishful thinking. I hope that I will weigh 30 lbs less in a month - wishful thinking.”

But Christian hope is rooted in the resurrection of Christ, Perez said.

“Where is the source of hope? Not in us, not in the self-help section of the bookstore. The source of our hope is Christ, the same Christ who walked the planet, who rose from the dead,” he said.

“At the very core of our Christian faith is a basic reality, a truth,” he said. “Someone asked me, with everything going on in the Chruch and the world, do you have hope? And I said to this person: Listen, I gave my life to a faith that believes that a dead man rose from the dead. Yes, I have hope.”

“This is the foundation of our Christian faith, this hope, that no matter how dark it gets, no matter how much it appears that it is the end, it is not,” he added.

Perez said he wants to see the Church continue to be a sign of hope for all, especially those who have been hurt by the abuse scandals.

“Despite...the sad betrayal of some of our own, who have deeply hurt those they were called to serve, for which I and we are ever so deeply sorry to these victims, we continue to work with hope that we will make it right and be a source of healing for them,” he said.

Perez also invited everyone to renew their relationship with Christ, and invited those who have been away from the Church to come back.

“So wherever you find yourself on your journey...it is time to reach out and grab His hand, the Lord’s hands. Like the woman who hemorrhaged for such a long time, she had the conviction and hope that if she could just touch his garment (she would be healed),” he said.

In their remarks, both Perez and Pierre also thanked Archbishop Chaput for his years of service to the Archdiocese of Philadelphia and to the other places where he served.

“Chaput faced lots of challenges when he got here, and he embraced them with great steadfastness … and he made decisions that sometimes a father has to make, that sometimes brought him great suffering and criticism,” Perez said. 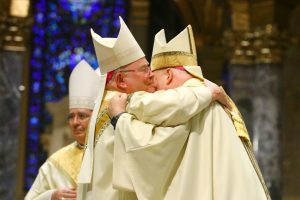 Chaput is “a man of great faith, incredible faith, who proclaims the truth of the Gospel and our faith with courage, and the archdiocese owes this man an incredible debt of gratitude for who he was, is and will continue to be,” he added.

Pierre, who presented Perez with the official announcement of his installation signed by Pope Francis, also thanked Chaput for his “tireless promotion of the faith.”

He said that Chaput showed “courage and prudence” when confronted with handling the sex abuse crisis that had happened in the archdiocese when Chaput arrived.

“You ensured that the joyful message of the Gospel can continue to go forward,” Pierre added.

“I thank you for a lifetime of dedication and service, and I believe firmly you have earned a little rest.”

At the end of his homily, Perez said he does not have a “plan” for the archdiocese, beyond listening to its people and learning from them, but that he does have a vision, which he is taking from Pope Francis’ 2013 apostolic exhortation Evangelii gaudium.

“The Church which ‘goes forth’ is a community of missionary disciples who take the first step, who are involved and supportive, who bear fruit and rejoice. An evangelizing community knows that the Lord has taken the initiative, he has loved us first, and therefore we can move forward, boldly take the initiative, go out to others, seek those who have fallen away, stand at the crossroads and welcome the outcast,” he said, quoting the exhortation.

The archbishop closed with his own quote, which he asked everyone present to remember: “Never underestimate the power of the Spirit of God working in you, through you, and despite you!”