A blue-ribbon panel of Catholic doctors from some of the nation’s top research hospitals and universities says churches should be able to reopen “as safely as other essential services,” after being shut down for more than two months due to the coronavirus (COVID-19) pandemic.

In a document published on the Catholic Medical Association website and sent out to the nation’s bishops last week, the seven-member panel offered a “road map” for the nation’s churches, including guidance on how to hear confessions and resume public celebrations of the Eucharist.

“I believe that churches can be just as safe, if not at times safer than so-called ‘essential businesses,’ provided they take the precautions that are recommended in this document,” said Dr. Anushree Shirali, a nephrologist at the Yale University School of Medicine who has been treating coronavirus dialysis patients since the pandemic broke out in March.

In exclusive interviews with Angelus, Shirali and other authors said they came together to offer guidance as Catholics and health professionals wanting to help their bishops develop “safest practices” based on the best medical evidence on the coronavirus.

With the outbreak of the coronavirus, every U.S. state put in place restrictions aimed at restraining the virus’ spread, with most imposing strict “stay at home” orders and shutting down businesses and activities considered “nonessential.”

States began reopening this month, most following federal guidelines and benchmarks for a “phased in” return to normal operations of businesses, schools, and other social functions.

And while several dioceses around the country have announced initial, cautious plans for reopening, churches remain sharply limited under many state recovery plans, including plans in California and New York, two of the states hardest hit by the coronavirus.

California Gov. Gavin Newsom envisions “in-person religious services” not opening until the third phase of his four-phase plan, listing churches among other “higher risk environments,” such as movie theaters and sporting events. At a May 18 press conference, Newsom suggested that faithful could meet for worship again in a matter of weeks, “not months … if everything holds,” but offered no specifics.

In their new document, the blue-ribbon panel of specialists from Yale, Columbia, UCLA, and the Mayo Clinic call into question the idea that churches pose higher risks for spreading the virus.

The doctors say the Church should be guided by “faith and reason, especially in times of crisis,” and they urge the Church to “comply with state and local regulations.”

“Safest practices should be created with input from medical experts,” the new document adds. “These practices will likely evolve as the pandemic unfolds, and will vary based on ongoing local, regional, and national risk assessments.”

From left: Dr. Anushree Shirali and Dr. Andrew Yang, both of the Yale School of Medicine, and Dr. Paul Krogstad of the UCLA Department of Medicine.

In interviews, the doctors emphasized that churches should be regarded as essential partners in rebuilding society in the wake of the pandemic, and said there are reasons to believe churches can do an even better job protecting people than other institutions in society.

“I just can’t see for any clear scientific reason why preparing food for a thousand people in a restaurant is any safer than people going to Mass,” he added.

In their road map, the doctors recommend that Mass be celebrated using social distancing measures with congregants wearing masks and that parishes should be cleaned thoroughly between services. Singing should be avoided, they say, and Communion should be received in the hand, with younger priests or ministers preferred in distributing Communion.

The sacrament of confession, the doctors recommended, “should follow safe social distancing practices and be carried out in a well-ventilated area, outdoors, or in the main church” with both priest and penitent wearing masks and with an “impermeable physical barrier” between them.

In a May 14 memorandum, Hartford Archbishop Leonard Blair, head of the U.S. bishops’ worship committee, offered the new document as “another resource” for bishops working on their reopening plans.

Archbishop Blair had earlier circulated a document prepared by another group of doctors for the Thomistic Institute, affiliated with the Dominican House of Studies in Washington, D.C.

The prelate described both documents as “primarily medical in nature” and said both “specify the medical considerations that need to be taken into account, even as there is disagreement on some points of a prudential nature,” he wrote.

The chief difference between this new document and the earlier one concerns how Communion should be distributed and received.

While the Thomistic Institute concluded that “it is possible to distribute on the tongue without unreasonable risk,” this new document urges that Communion be distributed in the hand, citing “newly available evidence” about the transmission of the coronavirus through saliva.

Shirali, the Yale nephrologist, said this conclusion was difficult for her.

“I don’t actually feel comfortable receiving Communion in any other way than on the tongue,” she said. “At the same time, I’m also somebody who, when we have influenza breakouts, doesn’t receive on the tongue and receives spiritual communion.”

COVID-19, she said, is more dangerous than the flu. Emerging data suggests that the “viral load” of the coronavirus in an infected person’s saliva may be higher than in the pharynx and nasal passages, potentially making the mouth “a huge reservoir” for the virus.

Shirali told Angelus that “very strong precautions” for distributing Communion on the tongue would be needed, including requiring the priest to “sanitize his hands immediately after each communicant, regardless of whether he thinks he has touched the tongue or any other part of the recipient’s mouth.” 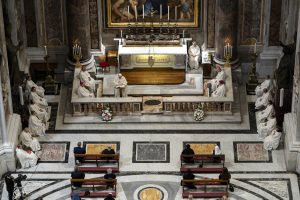 Ambassadors, priests, religious and the faithful gather May 18, 2020, for Mass at the tomb of St. John Paul II in St. Peter's Basilica at the Vatican. Pope Francis celebrated the Mass on the 100th anniversary of the Polish pope's birth. Because of the COVID-19 restrictions, many of the faithful wore masks and those in attendance were required to observe social distancing. (CNS photo/Vatican Media)

The severity of the coronavirus and its impact, especially on patients who are older or who have pre-existing conditions, also led the doctors to recommend that Communion be distributed by younger priests and ministers in good health.

“My opinion as an infectious diseases specialist is that the young and healthy priests and eucharistic ministers are at lowest risk when being a part of this important sacrament and delivering the host to communicants,” said pediatric infection diseases specialist Dr. Paul Krogstad, who is assisting in trials of multiple experimental COVID-19 medications at the UCLA Medical Center.

Wang said his firsthand experience with the virus confirms scientific evidence that suggests that men are more susceptible than women to COVID-19 infection and that those over 55 are most at risk, along with patients with preexisting conditions such as high blood pressure or heart disease, diabetes or a weakened immune system.

While the doctors who spoke to Angelus insisted that churches could be opened as safely as businesses and retail outfits and restaurants, they also argued that the Church’s sacraments and ministry are vitally important as American society seeks a return to some semblance of normalcy.

Krogstad said the medical dangers of COVID-19 are real, but so are the psychological consequences of “stress and anxiety” caused by the shutdown of the economy and uncertainty about the future.

Wang agreed: “Especially now as people are experiencing a lot of anxiety, and psychiatric issues arising from being isolated, it’s important that the community of the Church is there for them, that the fortification we get from participating in the sacraments is available, so that the Church can help in this global crisis as it has in all the other global crises before this one.”

Shirali described the consensus among the doctors as: “Yes, we understand and we absolutely agree that the sacraments need to be open again, but it needs to be done in a matter that’s safest for everybody.”

Every institution in American society is going to have to adapt to the new realities of a post-COVID-19 world, Wang added. “This is a problem that any institution will have to deal with and innovate. There's no reason the Church can’t do that just as well as any other institution.”