The Next Four Years: Building an immigration policy for the least among us

She had made a journey of 2,000 miles with her father from an indigenous community in the highlands of Guatemala. Because of new measures designed to dissuade asylum-seekers at the border in El Paso, she and her father traveled almost 200 miles farther west into the remote and dangerous desert, where they crossed the border to ask for asylum.

Soon after turning themselves into the Border Patrol, she began to suffer seizures, and her temperature spiked to over 105 degrees. Then she was airlifted to the hospital. 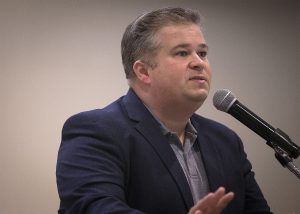 Not long after her death, together with three priests from El Paso, I traveled to Guatemala to meet with Jakelin’s family. Getting to her village was not easy. We traveled first by helicopter, then by bus, and finally walked the last long mile or so on a straight dirt path.

Meeting Jakelin’s family was one of the hardest moments of my life. We could offer nothing in response to the unthinkable grief borne by her mother. Her mother told us that Jakelin had insisted on accompanying her father because she was a dreamer, and because she thought it would be an adventure.

As she told us that, I glanced back at the dirt path and imagined her setting off, filled with a childlike sense of adventure. In looking at the path, I felt privy to an intimate and dreadful truth: Jakelin was a martyr to her dreams, and killed by a deeply flawed system. I could never look at something like the border wall in my community the same way again.

It is difficult to assign blame for Jakelin’s death. Does it lie with the Border Patrol agents responsible for providing her with water and ensuring her medical care? Or with the officers who turned asylum-seekers like Jakelin away at the border and toward the desert? Does it lie primarily with an administration that has demonized asylum-seekers for political gain? Or with a sprawling and vastly unaccountable border enforcement complex?

Finding an answer to who is responsible is a complex one. What is clear is that our current hardline immigration policies are producing innumerable casualties and destroying families, not moving us closer to meaningful reform. It’s well past time for a new direction.

A majority of Americans support comprehensive immigration reform, including an earned pathway to citizenship. The failure of Congress to act has left a population, which contributes positively to our national life, vulnerable to attack and exploitation.

In the absence of congressional action, immigrants have fallen victim to the constant seesaw of executive action and judicial intervention, which is bad for migrants and bad for democracy.

In order to demonstrate credibility with advocates and the immigrant community, our next administration will have to prioritize a long overdue legalization program for the undocumented.

But even more must be done. America has a system which, over the last few presidential administrations, has criminalized more and more categories of migrants and has militarized the border, while paying little attention to the root causes of migration.

There are three things the next administration should prioritize:

1. End the politics of exclusion

Our current harsh immigration policies do not address real policy gaps. In fact, the unauthorized immigration population in the United States had declined during the Obama administration and apprehensions at the border largely continued to plunge from their historical highs around the turn of the century.

Attacks on migrants have solely served the purposes of a base politics of xenophobia, “fomented and exploited for political purposes,” as Pope Francis says in “Fratelli Tutti.” This must end.

The U.S. currently spends more than $25 billion annually on immigration enforcement, which dwarfs the budgets of all nonimmigration related federal law enforcement agencies, including the FBI.

We have constructed a top-heavy system of immigration enforcement — greased with dollars that flow to private contractors — narrowly designed to detain and deport rather than a system capable of humanely processing asylum-seekers like Jakelin.

The gross mismatch between the realities on the ground at the border and the politics of exclusion has resulted in more migrants and migrant children dying in the custody of the federal government in the last few years than ever before.

Monies should be redirected toward creating well-functioning independent immigration courts, as well as legal representation, and we should embrace proven alternatives to detention.

An obsessive focus on wall building has distracted us from the fact that we are implicated in many of the drivers of immigration to the border. Our consumption of drugs is driving an increase in criminality and the weakening of democracy in the major countries of origin in Central America.

Multinationals are engaging in a hostile competition for natural resources there, which is driving families like Jakelin’s off their land and into poverty. And our lack of leadership on climate change means that those who depend on cultivating the land for their livelihood face a more precarious existence every year we don’t act.

The most effective and the most moral action we can take on immigration is to redirect our attention and resources to addressing the drivers of migration, so children like Jakelin do not have to leave their communities and migrate.

Wherever I go, I carry with me a photograph of Jakelin. Whatever happens this election season, I pray that people of faith continue to work toward a compassionate system worthy of her dreams.

Dylan Corbett is the executive director of the Hope Border Institute, a Catholic advocacy organization located on the U.S.-Mexico border.