For nearly a quarter century, Edgar Lopez was a pillar of St. Anne Church in Carthage, Mississippi. The devoted husband and father of three spent four years studying pastoral ministry to better lead prayer groups, youth ministry, and social outreach. He gave generously from his wages as a mechanic at a local poultry plant.

On Jan. 22, his charred remains were found with those of 18 others in and around a bullet-blasted truck in the Mexican-American border town of Camargo in Tamaulipas. Lopez, 49, an undocumented worker who had been deported to Guatemala after a notorious 2019 immigration raid on Mississippi poultry plants, had tried to return to his wife, children, and grandchildren in Carthage.

“People are in shock. They can’t believe that something like this could have happened,” said Father Odel Medina, a priest of the Missionary Servants of the Most Holy Trinity, and pastor of St. Anne.

Most of the dead had relatives among Carthage’s burgeoning population of indigenous Mayan workers from Guatemala. Poultry jobs were arduous, dirty, and dangerous, but paid more for an hour of labor than the Guatemalans would make in two days in their villages.

Most of the massacred migrants were from the desperately poor town of Comitancillo, seeking jobs in Carthage that Americans had long refused, Father Medina said.

He called it a bitter irony that, seven months after the government deported hundreds of undocumented poultry plant employees, they were declared “essential workers” during COVID-19.

“If they didn’t work, you would not have food on anyone’s table,” Father Medina said. 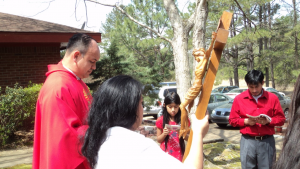 Lopez grew up in the village of Chicajala, where death from malnutrition is common. He had no shoes for school and was bullied by other students and teachers alike.

His response, Father Medina said, was to say, “I’d like to be a teacher and change the way they teach children.”

He left for Guatemala City in his teens, entering the United States in his mid-20s. He was deported a year later, but soon returned to his wife and baby in Carthage. They bought a modest house in which they raised three children, now ages 11 to 21.

He organized the first Spanish Masses at St. Anne. In addition to being a lector, extraordinary minister of holy Communion, and youth minister, Lopez was the head of the St. Anne “directiva,” a pastoral advisory board that looked after the needs of the Latino community. He spent four years studying for certification in Hispanic ministry through the Southeast Pastoral Institute in Miami.

Whether he was in a leadership role or simply participating, “he was always at the service of others,” Father Medina wrote in the parish newsletter. 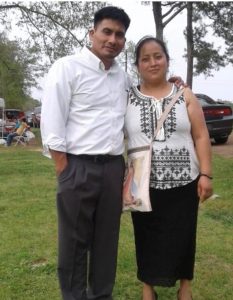 Edgar Lopez and his wife had three children in the U.S.

Juanatano Cano, who ministers among Guatemalans in the Archdiocese of Los Angeles, never met Lopez, but had a parallel childhood. Their adulthoods diverge because Cano, a leadership development consultant who is finishing his doctorate, received asylum and working papers after entering the U.S. illegally in the late 1980s.

Cano pins their early hardships on prejudice against their indigenous heritage.

“Racism in Guatemala is worse than in the United States. To call someone ‘an Indian’ is the worst insult if they want to humiliate someone,” he said.

He described indigenous Guatemalans as descendants of those who survived the Spanish conquest 500 years ago by fleeing to the hinterlands. No government has ever tried to integrate them into the Guatemalan economy.

“There was no money for education or health care for us,” he said, “According to the government, we are an obstacle to the prosperity of the whole country.” 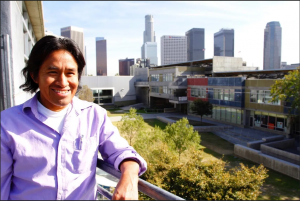 Originally from Guatemala, Juanatano Cano works with the Office of Ethnic Ministries for the Archdiocese of Los Angeles.

In 1981, Guatemala’s long-running civil war escalated. “I saw the military bombing little towns and little Indian villages. I told my mom, ‘Let’s get out of here. They are going to wipe us out,’ ” Cano said.

She would not leave. So in 1982, at age 13, he left alone for the city. There he did housework in exchange for room and board, while attending night school. When his high school diploma brought no opportunities for advancement, he traveled by bus and train through Mexico, walking across the border into California.

He graduated from college, taught math for 15 years, earned his principal’s certificate, then made a career shift to leadership formation. He is a consultant to the U.S. Catholic Bishops’ Subcommittee on Native American Affairs and volunteers at Immaculate Conception Church, Holy Cross Church, and La Placita Church in LA.

Today’s Guatemalan migrants bring the same dreams and needs that he did, he said. He blames the government of Guatemala for their suffering.

Even by U.S. standards, health care costs are high in Guatemala, he said. At least two migrants killed with Lopez were seeking jobs to pay for relatives’ medical care: surgery for a baby with a cleft lip and medication for a mother with diabetes.

“These people died because they wanted to make a little money for surgery that was so basic. Why does the Guatemalan government ignore this? Why? Why? It makes me sick to think about it,” he said.

“That is why people leave their country. They are aware that it is dangerous, but they take the risk, even knowing it could be deadly.”

Smugglers, known as “coyotes,” are luring customers with claims that the Biden administration has opened the border, Cano said.

“They are telling them to come and the United States will accept you and give you legal status,” Cano said. “They are lying to people.” 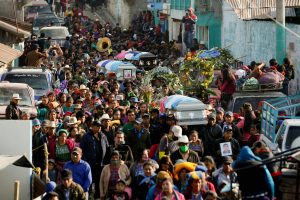 Migrants headed to the United States walk along a road in El Florido, Guatemala, on Jan. 16. (CNS/Luis Echeverria, Reuters)

Catholic social teaching calls nations to regulate their borders in a humane manner, recognizing both security and a human right to migrate in search of food, medical care, and safety, said Christopher Ljundquist, adviser for Latin America in the U.S. Bishops’ Office of International Justice and Peace. The Church views immigration as a source of, not an obstacle to, economic development, he said.

Since about 2010, however, the journey through Mexico has become far more deadly as cartels became increasingly savage.

“Migrants en route to the United States are perfect prey to these cartel killers, who force them into smuggling, kidnap them, extort them and, as we have seen, murder them in cold blood without the least scruple,” he said.

Anyone considering migration, he said, needs to understand that “the journey north is dangerous, that there are killers en route who often literally worship death, and that [migrants] are seen by the cartels as human merchandise.”

The August 2019 immigration raids that led to Lopez’s deportation were national news. Of nearly 700 workers detained, two-thirds remained in the U.S. Lopez was deported as a repeat criminal due to his earlier deportation in the 1990s.

He spent nearly a year in detention, surviving COVID-19 while ministering to inmates.

“He never lost his faith, even with those terrible experiences that he had passed through,” Father Medina said. “When he was in the detention center, he called me and asked for books and rosaries in order to make a prayer group. He said that, even in those circumstances, you always cry out to God.” 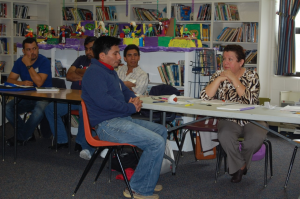 Edgar Lopez in the early days of his ministry at St. Anne's Church in Carthage, Mississippi. (Father Odel Medina)

“We tried to do our best for him, to fight for his freedom, to say that he was a person with character,” he said.

The federal judge called Lopez the kind of man he would like to have as a neighbor, but said that the law tied his hands. “It hurts my heart to see what this great nation is doing to you,” he told Lopez as he ordered the deportation.

In July 2020 Lopez was flown to Guatemala. While volunteering in the parish he had built through his donations, he longed for his family.

“I tried to give him support and prayer and spiritual guidance,” Father Medina said.

When the priest left for vacation in late December, however, Lopez had said nothing about returning. “I think he wanted it to be a surprise,” Father Medina said.

Lopez contracted with a local coyote who was trusted, Father Medina said. The group set out on Jan. 12. Their families last heard from them on Jan. 21.

The next day, “The coyote called his family in Guatemala and said that they had all been killed,” said Father Medina. “The coyote had a son who was with the group, and he was killed as well.”

Mexican investigators found bodies burned beyond recognition in a truck pierced by 113 bullets. Identification came through DNA. Twelve police officers were arrested for killing them, though authorities have identified no motive. Speculation ranges from mistaken identity to a cartel refusing to let others move human merchandise on its turf.

Guatemala declared three days of national mourning. The nation’s president met the flag-draped coffins at the airport, in a ceremony televised live nationwide.

Father Medina went to the funeral for the Comitancillo victims, held on a soccer field. A local priest denounced the injustice that forced villagers to seek work in another country and the deportation of a man who had been a beloved neighbor for two decades.

Migration will not stop, Father Medina said. While he was there, two families asked him to bless their sons for the journey north.

“I have witnessed the burial of an apostle, a man who recognized God’s call and who lived his baptismal life with great hope,” Father Medina wrote to his parishioners.

“Now Edgar goes to enjoy the presence of God. May the soul of Edgar and the soul of all his companions by the mercy of God, rest in peace.”