Funeral Mass for 640 unborn children is held in Poland

A Catholic bishop presided Saturday at a funeral Mass for 640 unborn children in Poland.

Bishop Kazimierz Gurda of Siedlce celebrated the Mass Dec. 12 in the Church of Holy Trinity in Gończyce, 50 miles southeast of the capital, Warsaw.

In his homily, he said: “These children have the right to a worthy burial as they are persons from the moment of conception. The right to life is a right that cannot be taken away from anyone, including and above all from a defenseless child in the womb.”

“Whoever has received the gift of life from God has the right to life and has the right to love. Even if their life story ended in a few months, even before they were born, it doesn’t mean they ceased to exist. A person’s life changes, but it doesn’t end. Their life goes on. God has prolonged it for all eternity.”

After Mass, the unborn children’s coffins were solemnly buried in a nearby cemetery. The coffins contained the bodies of children who had died following stillbirths, miscarriages and abortions. They were collected from different hospitals, mainly from Warsaw.

The ceremony was the initiative of Maria Bienkiewicz, of the New Nazareth Foundation, who has been organizing funerals for unborn children since 2005.

That year, the Holy Family Hospital in Warsaw began to put into practice new principles for the care of the bodies of children dying before birth, under the guidance of its then director, Professor Bogdan Chazan.

The principles were adopted by other hospitals, but some institutions reportedly still store the bodies indefinitely. 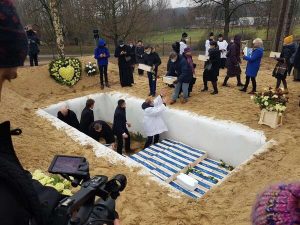 Abortion is once again the subject of a heated dispute in Poland after the country’s constitutional court declared Oct. 22 that a law permitting abortion for fetal abnormalities was unconstitutional.

Under a law introduced in 1993, abortion is only permitted in Poland in cases of rape or incest, risk to the mother’s life, or fetal abnormality.

Approximately 1,000 legal abortions take place in the country each year. The vast majority are carried out in cases of fetal abnormality. The ruling, which cannot be appealed, could lead to a significant reduction in the number of abortions in the country.

The government responded by delaying publication of the Constitutional Tribunal’s ruling, which has no legal power until it appears in the Journal of Laws.

He said: “The right to life is a fundamental human right. It always takes precedence over the right to choose, because no person can authoritatively allow the possibility of killing another.”

Following the burial of the unborn children in Gończyce, Bishop Gurda was invited to strike a bell blessed by Pope Francis in September, along with others present for the ceremony. 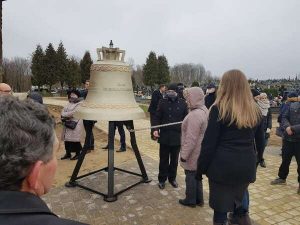 The Voice of the Unborn bell was commissioned by the Yes to Life Foundation (Fundacja Życiu Tak in Polish).

The bell is decorated with a cast of an ultrasound image of an unborn child and a quotation from Blessed Jerzy Popiełuszko: “A child’s life begins under the mother’s heart.”

In addition, the bell features two tablets, symbolizing the Ten Commandments. On the first are the words of Jesus, “Do not think that I have come to abolish the law” (Matthew 5:17), and on the second is the commandment, “You shall not kill” (Exodus 20:13).

Pope Francis was the first person to ring the symbolic bell after giving it his blessing in a courtyard in Vatican City after his general audience.

The pope noted that the bell would “accompany events aimed at remembering the value of human life from conception to natural death.”

“May its peal awaken the consciences of legislators and all people of good will in Poland and the whole world,” he said Sept. 23.