The Catholic Church and its people stand ready not only to help expectant mothers bring their pregnancies to term but to assist women who have had abortions, said Archbishop William E. Lori of Baltimore, chairman of the U.S. bishops' Committee on Pro-Life Activities.

The ministries are many, he said in his homily at the Jan. 20 Mass that began the annual National Prayer Vigil for Life at the Basilica of the National Shrine of the Immaculate Conception. The vigil is held prior to the Jan. 21 March for Life in Washington.

"I salute Project Rachel and other pioneering ministries that provide healing and spiritual renewal to women and couples after an abortion," Archbishop Lori said in his homily.

He also praised the Sisters of Life, which he called "a growing religious community of women who, by their way of life, bear witness to the beauty and dignity of every human life."

"This they do as they welcome pregnant women into their homes and provide life-changing spiritual resources to women in crisis," he said.

Archbishop Lori diverted from his homily to seek -- and receive -- a round of applause for them and all sisters at the Mass.

"Another beautiful and rapidly growing ministry is Walking with Moms in Need, a ministry sponsored by the United States Conference of Catholic Bishops. This parish-based ministry helps open the eyes of parishioners to pregnant and parenting moms in their local communities," the archbishop said.

"It enables parishioners to know these mothers, to listen to them, and along the way, to help them obtain the necessities of life for themselves and their children, including medical care as well as emotional and spiritual support." The initiative, he added, "is a way we can help millions of mothers! It is also a way parishes can respond to Pope Francis' challenge to be 'islands of mercy in a sea of indifference.'"

"Perhaps it was Mary who first exemplified Walking with Moms in Need," Archbishop Lori said. "When she learned from the angel that her cousin Elizabeth -- well past the age of child-bearing -- was in her sixth month, Mary hastened to her side. Mary's journey through the hill country was a dangerous trek of some 90 miles. But she went the distance to reach out in love to Elizabeth in her hour of need."

Recalling the Gospel story proclaimed at the Mass, Archbishop Lori said, "The pregnancies of both Mary and Elizabeth seemed unbelievable, a cause for questioning and fodder for gossip. Yet, like Jeremiah the prophet and even more so, God had a plan for the children and the mothers who bore them."

Archbishop Lori told of his own history of counseling women and couples considering abortion.

"More than a few times in my nearly 45 years of priesthood, I have met with women and couples who were contemplating an abortion. Almost without exception, these women and couples were deeply conflicted. Most experienced a very deep and real anguish," he said.

"With the help of God's grace, I tried to walk with them, to connect them with helpful pro-life medical services and ministries, and never to assume that I fully understood what they were going through," Archbishop Lori added.

"Some couples with whom I met received troubling prenatal diagnoses. Others, especially unmarried women, were often victims of poverty and abuse," he continued. "In almost every case, family members, friends, and medical professionals urged them to get an abortion as the 'solution' to a 'problem' child -- a child who was likely to be born with an abnormality, or conversely, a perfectly healthy child who would be born into poverty and lack of equity."

Archbishop Lori said, "To many of them, it seemed that their only option was to have an abortion, but deep within, they knew it was a tragic choice with lasting consequences. What is needed so badly in all such situations is a witness to love and to life!"

In his homily, he took note of recent developments in which pro-life Americans may be able to take heart. 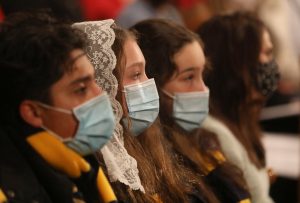 Young pro-life advocates attend the opening Mass of the National Prayer Vigil for Life Jan. 20, 2022, at the Basilica of the National Shrine of the Immaculate Conception in Washington. (CNS photo/Bob Roller)

"We are deeply conscious that the Supreme Court is weighing Dobbs v. Jackson Women's Health Organization. This case gives the high court an opportunity to undo the grave injustice it did in 1973 when in Roe v. Wade it decided that a whole class of human beings, the unborn, are outside the protection of the law, and thus 'non-persons,'" Archbishop Lori said.

"Since that tragic decision, more than 60 million innocent lives have been taken. If Roe is overturned, states will again be able to protect the lives of unborn children. If legal protection is accompanied by more care for mothers and their children, then it will be more and more clear to more and more of our fellow citizens that choosing life does not hinder happiness or burden society," he said.

"On the contrary, choosing life creates a society that looks to the future with hope, a society where a woman is never forced to choose between her future and the life of her child!"

Archbishop Lori added, "If, later this year, the Supreme Court does overturn Roe, in whole or in part, what should we as Catholics be prepared to do? First, we must be a clear and united voice that says our society and laws can and must protect and care for both women and their children.

"As a matter of fundamental justice, we must work to protect in law the lives of the unborn, society's most vulnerable and defenseless members," he continued. "And we must redouble our efforts to accompany women and couples who are facing unexpected or difficult pregnancies, offering them loving and compassionate care."

As a consequence of the coronavirus pandemic, the District of Columbia has a policy requiring the wearing of face masks for all indoor events, including worship services, but there were no seating restrictions for the Mass.

The Mass drew about 5,000, according to basilica spokeswoman Jacqueline Hayes -- less than half than in recent years when 11,000 or so worshippers would shoehorn their way into the basilica.