The faith of Tommy Lasorda, the baseball manager who 'gave God a jersey'

The oversized, gold-framed portrait of Mother Teresa was fairly easy to spot for Tommy Lasorda when he sat at the desk of his fifth-floor executive office space at Dodger Stadium, carved out for him after he was given a “special adviser” role by Dodgers ownership.

Even among the countless other glossy photos of former presidents, legendary entertainers, and star athletes, Lasorda made sure that it was visible — it was even autographed. Not far is a portrait of Los Angeles Archbishop Emeritus Cardinal Roger Mahony.

Then there is also a picture of an unassuming nun wearing a white habit.

“That’s Sister Immaculata, my seventh-grade teacher,” Lasorda explained in “I Live For This! Baseball’s Last True Believer,” a 2007 biography on him. “She was the only one who believed in me.” 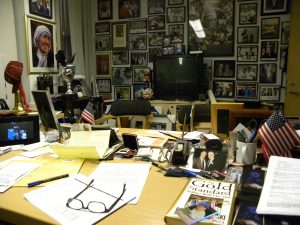 Lasorda's portrait of St. Teresa of Calcutta is seen to the left in the view from his office desk. (Mark Langill/LA Dodgers)

Lasorda, the Hall of Fame manager who led the Dodgers for two decades, died of a cardiac arrest at age 93 on Jan. 7. He leaves behind his wife of 70 years, Jo, their daughter, Laura, and granddaughter, Emily Tess. His son, Tommy Jr., died in 1991.

But he left this world having catechized legions of believers in his boisterous guarantees that there was a “Big Dodger in the Sky,” and that “if you don’t love the Dodgers, there’s a good chance you may not get into heaven.” He used that motivational will on his players to ignite two World Series championships in 1981 and 1988, both times against heavy odds, and then, after coming out of retirement at age 73, to guide a squad of U.S. amateurs to an unlikely gold medal at the 2000 Summer Olympics in Sydney, Australia.

The faith that Sister Immaculata instilled in him as he was growing up poor, attending the Italian Catholic parish of Holy Savior in his hometown of Norristown, Pennsylvania, north of Philadelphia, is something he never forgot.

Lasorda gave the interview as he was in Chandler, Arizona, speaking to the Seton Catholic Prep school for a booster club benefit. Lasorda also told the publication he was “always proud to say I was Catholic, no matter where I was.” His faith, he said, “teaches you to be open. It teaches you to be what you want to be.”

Lasorda kept the picture of Sister Immaculata in an upgraded extension of the old wood-paneled room next to the team’s clubhouse, a place where he filled out as many lineup cards as bowls of pasta while regaling guests during his time as the Dodgers manager from 1976 to 1996. 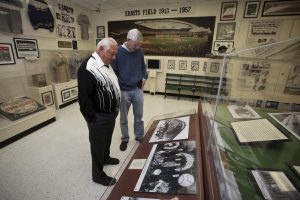 Tommy Lasorda is shown an exhibit on Brooklyn’s Ebbets Field at the Los Angeles Sports Museum by curator Gary Cypres before a press conference in 2010. (Tom Hoffarth)

Bill Plaschke, the Los Angeles Times sports columnist who co-authored the book “I Live For This!” noted that the office was “clearly decorated in the manner of a church elder decorating the altar. It’s all about worshiping a higher power. It’s Lasorda’s version of stained glass.”

“Your office is supposed to be about who you are, right?” asked Lasorda.

Lasorda, who often had a Catholic priest celebrate Mass at Dodger Stadium before Sunday home games, was a proverbial godfather to many of his players. He convinced the Dodgers to draft one of them — a cousin’s son, Mike Piazza, with a very late-round pick — and coached him to eventually become a Hall of Fame catcher.

Eric Karros, the Los Angeles Dodgers’ all-time career home run leader, asked Lasorda to sponsor his two sons at their first Communion and confirmation. So there Lasorda was, introducing the pair to pastor Msgr. John Barry at an Easter vigil at American Martyrs Church in Manhattan Beach.

But perhaps Lasorda’s Catholic faith was on display the most when he was fundraising. 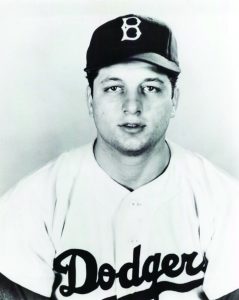 Tommy Lasorda with the Brooklyn Dodgers in 1954, his rookie season. (Wikimedia Commons)

“I remember one time when we were at the Baseball Winter meetings in Nashville [in 2007], he took a group of people out to visit some nuns who were close to his heart,” said Ned Colletti, the Dodgers’ general manager from 2005 to 2014.

Those were his beloved Sisters of Mercy in Nashville, whom he had helped build a new convent. Lasorda made it happen, in part thanks to winning a bet with some players that he could lose weight a year after the Dodgers’ 1988 championship.

“I don’t think anyone in the world knew more people than Tommy did,” Colletti added. “Maybe he didn’t talk a lot about his faith, but he was sure active about it.”

In a tribute piece published after his death, former L.A. Times sports editor Bill Dwyer recalled the time he and Lasorda became interested in helping a priest at an Indian reservation in South Dakota raise money for their schools.

In his 2015 book, “My Way,” Colin Gunderson, who became Lasorda’s personal assistant with the team for many years, included another quote from Lasorda: “I believe that God puts you on Earth for a reason. I think He put me on Earth to help other people, to do everything I can to help.”

Steve Brener, the longtime Dodgers media director, said he still can’t believe a time when he went with Lasorda to a hospital in San Francisco — home of the rival Giants — because a family sent him a letter asking them to visit their son struggling in a coma.

“The next year, Tommy introduces me to the kid at Candlestick Park (in San Francisco) — this was the kid he talked to at the hospital,” said Brener. “The kid rebounded and now he was dressed as the Dodgers’ batboy. It was the most incredible thing I had ever seen.”

Days after Lasorda’s death, the Dodgers posted a video tribute to him, narrated by the Dodgers’ retired Hall of Fame broadcaster and fellow Catholic Vin Scully. Scully and Lasorda, two of the the longest tenured members of the Dodgers organization, represented a Catholic faith shared by the team’s first owner in Los Angeles, Walter O’Malley, and continued with his son, Peter. 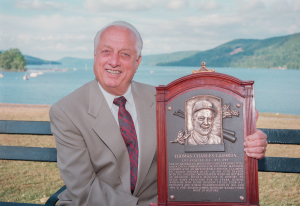 Tommy Lasorda in Cooperstown, New York, as he was elected to the Hall of Fame in 1997. (Milo Stewart Jr./National Baseball Hall of Fame and Museum)

Scully said there were two things he would always remember about Lasorda.

“The first is his boundless enthusiasm,” said Scully, who turned 93 last November, two months after Lasorda celebrated the same birthday. “Tommy would get up in the morning full of beans and maintain that as long as he was with anybody else.

“The other was his determination. He was a fellow with limited ability and he pushed himself to be a very good Triple-A pitcher. He never quite had that something extra that makes a major leaguer, but it wasn’t because he didn’t try. … His heart was bigger than his talent and there were no foul lines for his enthusiasm.”

Talk to those who shared time with him, and you’ll hear countless anecdotes of how Lasorda made no secret of how his Catholic upbringing shaped his larger-than-life, fun-loving nature.

Mark Langill, the Dodgers’ team historian, marveled at Lasorda’s ability to tailor motivational speeches for religious groups in such a way that, by the end, he had them believing an actual higher power wore Dodgers blue.

“He’s the only person I know who could personalize the Almighty and assign him to a team,” said Langill with a laugh. “No one ever gave God a jersey like he did.” 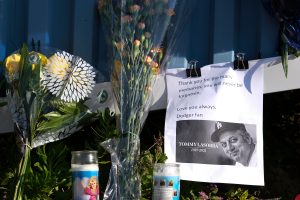 Flowers, candles, and messages left by fans in front of a sign outside of Dodger Stadium Friday, Jan. 8, in Los Angeles. (Shutterstock)

Lasorda loved to tell the story about a Dodgers road-trip stop in Cincinnati. As he attended Mass on Sunday morning, he caught sight of Reds manager John McNamara.

“I knew why he was there and he knew why I was there,” Lasorda said. “After Mass, he said, ‘Wait for me outside, I’ll be right out.’ I thought it was a little strange. I watched: He went over to the right side of the church, knelt down and lit a candle. When I saw that, I walked up the left aisle, and when he left, I blew out his candle.

“And all during the game, I kept hollering at McNamara: ‘It ain’t gonna work, John, I blew out the candle.’ ”

That day, the Dodgers routed the Reds, 13-2. Lasorda admitted to McNamara what he had done.

That winter, Lasorda got a phone call from McNamara, who was on a trip to Rome.