Coronavirus ends their season, but their faith endures

There are goals, and then there are goals. High achievers set high goals, including, and maybe especially, those who are about to graduate from high school.

Charlotte Allison, Jonah Copeland, and Kevin Parada are among them. All are Catholic high school seniors and leaders of their respective teams. All have enjoyed success in their young athletic careers, and all were counting on surpassing those achievements in 2020.

Then, in mid-March, these three, and thousands of high school student-athletes throughout California, were told that their seasons were over. Government and school administrators, seeing the rapid spread of the coronavirus (COVID-19), canceled spring sports activities, just as school authorities were closing campuses and restricting instruction to “distance learning” via the internet.

When first informed of the cancellation, Allison, Copeland, and Parada did not take the news well — tears, disappointment, even devastation over lost opportunities. And who could blame them, or any of their peers?

But in the weeks since, their grief has been tempered by appreciation: for their own good health, for the opportunities they have had, and for the promise that still lies ahead, bolstered by the love of family and friends.

And, especially, by their strong faith in God.

‘I have a lot to be thankful for’

It was the second week of March when Parada and his Loyola High School baseball teammates — preparing to play St. Francis in the second of a three-game series — learned their season might be in jeopardy.

“I got a text from a friend at Harvard-Westlake High School, telling me the season was being canceled,” said the senior catcher from Pasadena, who had hit safely in 10 straight games and already had the attention of pro baseball scouts.

“So on the bus ride to the game, I started searching for information that would confirm or refute that. It was looking like this could be our last game.”

In mid-March, Parada was in his economics class when word came from athletic director Chris O’Donnell that all spring sports were canceled through March 28. Less than two weeks later, Gov. Gavin Newsom announced the closure of all schools, effectively canceling all spring sports.

Parada, who has played baseball since he was 2 years old, wasn’t pleased.

“I want to play, just like everyone else does,” he said. “This was the last chance I had to show scouts and recruiters who I am as a player. And more importantly, our team felt we had the guys in place to win CIF this year. So it was hard to have that chance taken away.

“But after talking with my parents, I can see that there is a lot I have to be thankful for. I’ve been blessed to play baseball at a high level, and now God wants us to take some time to be with our families, to reflect on what matters in life.”

Besides baseball and being with his friends at Loyola while distance learning, the graduate of St. Philip the Apostle School in Pasadena said he also misses the service component of his school life: his involvement with Once Upon a Room, a nonprofit that serves the needs of seriously and critically ill children at local hospitals.

“We come in and decorate their rooms, spend time with them, try to let them know that we are there for them,” he said. “These are wonderful kids dealing with cancer and other serious illnesses or disabilities, but because their immune systems are compromised, we can’t go in there and put smiles on their faces. And that’s hard.

“But I have to understand, this is not about me and my personal satisfaction. This is about the lives of these kids and their families, and that’s way more important.”

So for the rest of the semester, Parada is focusing on his schoolwork and preparing for the future, either signing a pro contract or heading off to Georgia Tech to major in business administration while playing ball. And, all the while, keeping his faith.

“Through my Catholic school education,” he said, “I‘ve grown up a lot. I have learned that God works in many ways outside of church, helping me in every part of my life. I may not be perfect, but if I’m serving and helping others, I think I’m on the right track.”

‘My faith is my anchor’

Finding the right track, or field actually, took a little longer for Allison, who took up diving and gymnastics, and then volleyball, before a coach at La Reina High School, noting her athleticism, suggested she try high jump.

“I’d never heard of high jump,” said Allison, an effervescent 17-year-old from Ventura. “So in my sophomore year I tried it, and ended up setting a school record [at 5 feet 3 inches].”

In her junior season, Allison finished second in the CIF-SS Division 4 finals, and on Feb. 22 she jumped 5 feet, 2 inches, tied for second best in the Southern Section, while long jumping a section-best 17 feet, 4.5 inches. On March 7, at the offhand suggestion of her coach, Dave Avila, she tried triple jump for the first time and — after googling “triple jump for dummies” — posted a mark of 34 feet, 1 inch, setting another school record.

“I was telling my coach before every practice, ‘I’m going to State [finals] this year,’” she said. “Then came the day when I checked my email between classes and saw that the season had been canceled. My knees buckled, and I just fell apart crying. It was so heart-wrenching; it felt like such a big step backward.” 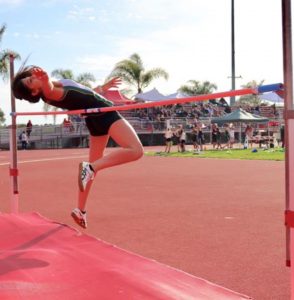 Having committed to attend Oregon in the fall, Allison had counted on this season to work toward becoming a heptathlete. To make time for training, she’d asked for time off from her coaching job at Gold Coast Gymnastics.

“Obviously, those plans have changed,” she said with a smile. “I hope to make the Oregon team as a walk-on, so I’m doing my best to stay focused and stay in shape, because sports help me stay focused. The busier I am, the more I accomplish.”

That includes a full academic load, including AP statistics and AP calculus. “I’m a business major,” Allison explained, “but I like challenging classes, because my goal is sports medicine. All the teachers and coaches at La Reina push us to be the best we can be.”

“When Charlotte puts her mind to something she will make it happen,” Avila said. “She is one of the most determined athletes I have ever seen. That, in combination with her talent and hard work, is what every coach wants to see in an athlete.”

Allison has found “amazing support” from her family, friends, and teachers, and as a team captain tries to offer the same support to those in her life. But what has helped her most in this challenging period of her young life is her faith in God.

“My faith is my anchor, every day of my life,” said Allison, who attends Mission Church in Ventura but treasures her Catholic school experience. “Knowing that God is always there, that he will never give up on me, helps me try to be a better person. And I feel closer to God each day, especially when I’m at La Reina. To be able to pray before class, to integrate faith into every aspect of your life is inspiring; it makes me stronger.”

‘God is always with us’

In 2019, Copeland was part of Serra High School’s 4x400 relay team that placed second in the CIF-SS Division 4 finals, helping Serra to a third-place finish in the team standings.

This year, “we had a group of freshmen and sophomores who were going to achieve great things,” said Copeland, the senior team captain who runs the 200 and 400 and participates in relays.

“This year was supposed to be special for our team,” he continued. “We planned on taking Division 4 at CIF, and our 4x200 relay team already posted the fastest time in the state [at the Bishop Gorman Invitational March 7 in Las Vegas].”

But soon after the Gorman meet, rumors began circulating about cancellation of the season. “A lot of guys were upset,” Copeland said, the son of assistant coach Keith Copeland. “So I took a different route, trying to stay positive and encourage my teammates.

“But when we were told the season had been canceled, my heart broke. It brought tears to my eyes, because it hurt to think we wouldn’t be able to compete in front of family and friends, much less achieve a championship.”

His hurt, though, soon took him back to his faith.

“I have to know that God has a plan, that he protects us and is always with us,” said Copeland, who attends Crenshaw Christian Center and, with his father, helps kids at the local YMCA “to build their bodies and their faith.”

The Catholic school environment helps him maintain that focus, even though he and thousands of students statewide are relegated to online distance learning.

A pre-veterinary major taking multiple science classes, Copeland is currently undecided about what college to attend, but intends to keep active in sports.

“I’m still getting some workouts in, even if that means doing them at home or having to go run a hill by myself,” he said. “After high school I plan on running track at the college level and continue my career as a student-athlete.”

And faith will always be constant. For perspective, he draws upon one of his favorite Scripture verses, from Proverbs 3:15, on wisdom: “She is more precious than corals, and no treasure of yours can compare with her.”

“Having faith helps me,” he said. “Knowing that Jesus died for our sins, that he made the ultimate sacrifice and that he’ll be there for me always helps me stay focused on what’s important in my life. My family has always told me, ‘Listen to God, he’ll help you figure things out.’ As a child of God, that’s what I’m called to do.”