Tommy Dunphy, a 37-year-old native of California's San Gabriel Valley, is no stranger to the streets of Los Angeles' Skid Row.

He has known both homelessness and the perils of jail, having spent time in and out of prison for two decades for drug-related charges.

But Dunphy has been doing his best to live a "clean" life, keeping various addiction and mental health challenges at bay and managing his HIV. Taking care of Arianna, his beloved dog of two and a half years, is a cornerstone in his life. So is his low-rent, government-subsidized apartment in the Gateway apartment complex on Skid Row.

Another godsend is his long-standing friendship with Sister Margaret Farrell, a member of the Religious Sisters of Charity, who is spiritual ministry coordinator at Covenant House California in Los Angeles and a frequent visitor to Skid Row.

As many as 60,000 people may be living on the streets at night in Los Angeles. In what is perhaps the most potent and visible symbol of homelessness in the nation's second-largest city, hundreds of people live in tents on Skid Row -- a risky and often dangerous life, exposing them to crime, drugs and prostitution. 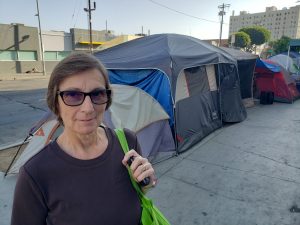 Sister Margaret Farrell, a member of the Religious Sisters of Charity, is spiritual ministry coordinator at Covenant House California in Los Angeles and a frequent visitor to the streets of Skid Row in the city's downtown area. The linked problems of homelessness and the lack of affordable housing are currently drawing urgent attention, but these problems are nothing new to Sister Farrell, whose religious order has championed shelter and housing issues through its ministries. (CNS photo/Chris Herlinger, courtesy Global Sister Report)

The linked problems of homelessness and the lack of affordable housing are drawing urgent attention at the moment, though it is nothing new to women religious, like Sister Farrell, who have championed the cause of shelter and housing in their ministries. Hundreds, if not thousands, of sisters are working in such ministries globally.

At the core of that ministry is a moral imperative grounded in the Gospel and the belief that having a home affords human dignity.

"No one should be living in the street, or in a car, or bouncing around from one relative's couch to another," Mercy Sister Helen Amos, a longtime housing and homelessness activist in Baltimore, told Global Sisters Report.

Dunphy says the ability to live in a safe, quiet apartment is the key to his success in the past three years.

Dunphy's story is a tale of quiet success. But sisters and others who minister to those experiencing homelessness feel overwhelmed with the increase of street homelessness in major American urban centers in recent years.

The issue is starting to attract international attention, too: The United Nations estimates that 1.6 billion people live in inadequate housing worldwide, and 15 million people are forcefully evicted each year.

The challenges of affordable housing and homelessness are taking center stage at Feb. 10-19 meetings of the U.N. Commission for Social Development, one of the main U.N. bodies dealing with development issues.

Though housing is enshrined as a human right in the U.N.'s 1948 Universal Declaration of Human Rights, the meeting marks the first time the world body will tackle the issue head-on as a priority for action. And it comes as the U.N. continues its ambitious goal of eliminating world poverty by the year 2030 through its 17 sustainable development goals.

Back in Los Angeles, 68-year-old Siti Pasinah recounts experiences of escaping an 18-hour-a-day housekeeping job in Los Angeles after the household did not pay her for her work. She was also physically abused and had her passport taken from her.

Eventually, she found stability through Alexandria House, a transitional residence in Los Angeles for women who have experienced trafficking or domestic violence. Pasinah lived at Alexandria House from 1999 to 2000, moved to affordable housing near the residence in 2000 and eventually settled in a "permanent supportive apartment building" developed by Alexandria House in 2007. 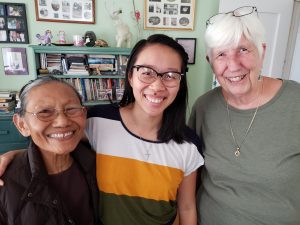 "Of this number, 90% have remained in permanent housing," she said.

But for agencies like Sister Vaughan's, the challenges remain acute: Homelessness is becoming more visible given the realities of gentrification, the process by which onetime poorer urban areas become destination neighborhoods for wealthier residents, often forcing longtime residents to leave.

"The struggle of people on the streets is all around us," said Sister Vaughan, a Sister of St. Joseph of Carondelet.

Anyone who focuses on issues of social inequality ultimately comes up against the challenges of homelessness and the lack of affordable housing, said Sister Veronica Brand, who represents the Religious of the Sacred Heart of Mary at the U.N.

Sister Brand and other sisters whose advocacy work is based at the United Nations know the February meetings are a starting point -- the topic is complex and multilayered. They note that some U.N. member states are likely to say homelessness is best addressed at local or perhaps national levels, not globally.

But Sister Brand and others see global dimensions in the millions made homeless because of climate-crisis events or in "the global economic system that is promoting an ever-widening gap between rich and poor," as Sister Brand said.

Mercy Sister Mary Scullion, one of the co-founders of Project HOME in Philadelphia, called the overall problem of homelessness and housing affordability a complicated issue with many facets, but she also argued that at its roots, "poverty is the fundamental cause of homelessness."

Philadelphia has seen a 10% annual rise in housing costs in recent years, making housing less and less accessible to those with lower incomes, Sister Scullion said.

Project HOME and the work of other groups have countered this trend. In addition to its immediate work of assisting those on the street, Project HOME has, it says, "developed 832 units of affordable and supportive housing for persons who have experienced homelessness and low-income persons at-risk of homelessness in Philadelphia." Its goal is to eventually complete 1,088 units of affordable housing in the near future; an additional 104 units are currently under construction.

Someone thankful for that work is David Brown, who helps manage a used-clothing boutique store run by Project HOME and rents an apartment in a building the agency built. 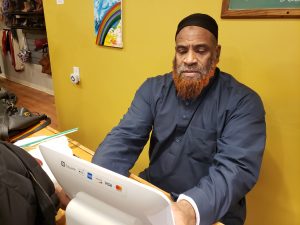 Brown, who used to be homeless, said it is no secret what homeless people need: a place to live and to find security and comfort.

"We don't need shelters," he said, adding that you can't go to a job interview from a place that's not clean and healthy. Housing will "help us navigate to get off the streets."

Like Dunphy in Los Angeles, Brown said he believes housing is the cornerstone for a dignified life.

"You have to start with housing," he said. "Give us affordable housing."