Without a home in the City of the Angels

What’s it like living on sidewalks and under bridges? Talking to LA’s homeless offers a unique view on the city’s deepening crisis

“Lady! Beautiful lady,” calls out Sister Rosaline Vu, opening the driver’s side door of the metallic Toyota van that has 94,000 hard stop-and-go miles on it. In her plain blue habit, she walks up to a dome tent back from the sidewalk. She says softly, “OK, wake up, Maria,” peeking inside.

A short woman wearing a long, heavy sweater over purple pants sits up and comes out, rubbing her eyes. Slowly, Sister Rosaline walks her to the van, asking, “How are you today?”

But Maria only wants coffee and bread. “My birthday is next month,” she says. “I was born on March 15, 1961, at 7 in the morning in Managua, Nicaragua. My grandmother was my deliverer.”

Sister Rosaline grabs a red-frosted cupcake from a tray, holding it out in front of her. “Happy birthday!” After five minutes of catching up, she asks, “How long have you been on the street?”

“Two years this Christmas. I had an apartment with my sweetheart. We were together for 16 years until he passed away. But no marriage. So that’s the problem.”

Then a ride-along visitor asks what it’s like living here on the street.

Maria makes a concerned face with pursed lips. She says, “It’s not easy,” now in a different voice. “It’s not easy. But I used to live around this area and the neighbors know me. That’s the good thing.”

“So do you think you’ll stay here?”

She shakes her head. “I will do better than this. I just want to make it a little better for myself. I understand what Sister tells me about getting off the street. But I only get GR (General Relief welfare). It’s $221 a month. That’s why I’m here because I don’t have to pay the rents that are so expensive. With $221, I can’t afford it. My brother has a nice house, but his wife doesn’t treat me good. And instead of staying here, I would be way out in Hemet. But I don’t have friends over there. My friends are here, my neighbors.”

Finally, Maria is asked if she feels safe.

“Did you sleep last night?” asks Sister Rosaline. “No, right? That’s why you sleep right now? I saw the blanket moving and said, ‘Someone’s living here.’ “

Maria reports that there used to be others living nearby, but they moved away. She doesn’t know why or where they’re at. “I have to sleep in the daytime now because at night I stay awake.” And that’s all the information she wants to share today. She says, “Thank you, Sister,” turning around and walking toward her tent. 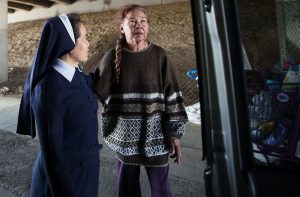 Maria, 57, has been living on the street for more than a year. (Victor Alemán)

It’s how the member of the Lovers of the Holy Cross of Los Angeles ends most stops on her Tuesday, Thursday and Friday outreach runs. Sister Rosaline has been doing this mobile ministry since 2005, 30 years after fleeing Vietnam at the end of the civil war.

Today, besides the mobile outreach and emergency shelter, the center also operates a transitional residence for women as well as apartments for mothers and their children and mothers with disabilities.

Sadly, the homeless women and men on the City of Angels’ streets keep growing. Last year’s homeless count by the Los Angeles Homeless Services Authority (LAHSA) found the number of chronic homeless — the folks the mobile outreach serves in encampments and on the street — jumped 20 percent in Los Angeles County from the previous year.

And overall homelessness in the county rose 23 percent to nearly 58,000 on any given night. The City of Los Angeles had the lion’s share with 34,189 homeless men, women and children.

So it was hard to miss the spread of encampments beyond LA’s infamous skid row, never mind the individuals and families begging on freeway onramps and street corners.

Camps were now in places they had never been before: popular public parks, near Tony restaurants, outside church parking lots. Citizens started pressuring local politicians: Something had to be done.

The estimate was that $355 million a year for 10 years would be raised.  That would provide so-called “wraparound” services to go with the housing and help the homeless transition into stable, affordable housing, as well as offer services such as mental health and addiction counseling, money management and job counseling.

But there have been bureaucratic and political setbacks. To date, little of that money for housing has been allocated. As a result, wraparound services haven’t been implemented. And, most disturbing, new encampments keep cropping up, while existing ones get bigger.

It said city leaders should take immediate action against homeless encampments because of public health and safety risks. He urged them to intervene much earlier, before the camps grew to be “very complex and very expensive to clean.”

Angelenos only had to look to Orange County, where it took weeks to remove the sprawling tent city lining the Santa Ana riverbed. But after protests from angry nearby home owners, lawsuits filed on behalf of homeless residents and a U.S. district judge visiting the site, a settlement was reached.

And some 730 river dwellers were placed in shelters or motel rooms, with the promise of being helped to find permanent housing. Why couldn’t that happen in Los Angeles? 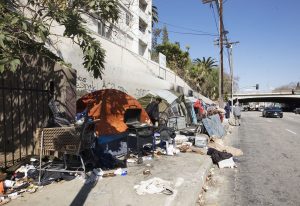 The number of people living in street encampments and vehicles jumped 26 percent last year from the year before. (Victor Alemán)

Sister Rosaline drives the Toyota van to the curb on Alvarado Blvd. near a 101 overpass. Encampments line both sides. But this side is worse. Ten tents are strung out between the sidewalk and a high chain-link fence.

Shopping carts are stuffed with soiled blankets and black plastic bags. There’s broken bikes, rusting barbecue grills and piles of clothes. Nowhere can you see the ground, covered with rotting garbage. But the smell of urine overrides all of that.

Sister Rosaline is loading a bag again, held open by Katz, with groceries. She’s also listening to a thin young woman with short auburn hair wearing a beaded jean vest rattle on about how her ID was stolen when she got out of prison 11 months ago in Arizona and came to LA.

“Oh, I’m so sorry,” she says, before adding, “It’s better to get off the street. You know what? At Good Shepherd we help you. If you want, I can take your phone number and your name. And we will call you when we have a vacancy.”

“You can stay there until you get housing. OK, we try to do that.”

“That would be awesome.”

“They’ve all been legally adopted by a family.”

“So you can change your life,” points out Sister Rosaline. “So what do you want?”

“Just some juice for me.”

Later, the woman, who goes by the name “Lucky,” tells the ride-along visitor that she lives on the other side of Alvarado in the smaller encampment. It’s safer.

“What about taking Sister’s advice, you know, about getting off the street?” she’s asked.

“I would live in a shelter. But, honestly, I’m a drug addict. And I’m not emotionally nor mentally ready to get straight,” she says in an even voice.

Lucky says her drug of choice is heroin. And she can buy enough to stay high for $60 a day. “My habit, honestly, is the lowest it’s even been right now,” she explains. “And my hopes right now are just to get an apartment and get out of here. Because these people are horrible. This block is one of the worst places to live as a homeless person in LA.”

“What about being a woman here?”

Lucky screws her face into a cynical frown. “You have to have some (expletive) to be out here. Yeah, they pick on you a lot. Especially if you’re white. Being white in this neighborhood is not good.”

The 34-year-old glances down the row of tents. A young guy with a beard is waving his arm. She says, “I actually got to go,” before running off. 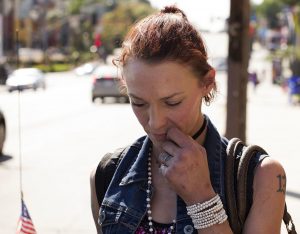 So far on this Thursday, Sister Rosaline and Katz have visited three homeless encampments, checked out two narrow alleys and made more than a dozen stops to hand out food, blankets and toiletries to folks living on the streets around Echo Park and nearby neighborhoods. And she’s more than earned the nickname LAPD officers have given her: “Sister U-Turn.” But they’ve never given her a single ticket.

On the way back to Our Lady of Loretto Church, the Mobile Outreach Program’s home base, the woman religious talks about the growing number of encampments and the people who call them home like Lucky.

“It’s terrible how they get used to living on the street,” she says, keeping her eyes on mid-afternoon traffic.

“For many, something is wrong in their head. That’s why they live wherever they feel good. There are a lot of people we meet on the streets right now who are very young, maybe 18, 20. And they have problems with their families. So I feel sad because they don’t have a good foundation and no one to help them. Many are just getting out of foster care or jail, and nobody will hire them.”

Sister Rosaline says you have to build up a relationship with homeless people so you can plant a seed that they can really have a different life. That’s why she and volunteers like Katz go out in the Toyota van three days a week — to plant that seed.

“Nothing is impossible with God,” she says with a knowing smile coming across her face. “So that’s why I don’t get burnt out. If one lady gets off the street, I’m very happy. And I thank God.” 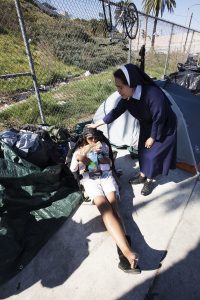