What St. John of Avila’s heart can teach mine

I entered seminary after graduating from high school when I was 18 years old. Throughout my eight years of formation since then, I have gotten a firsthand look at the diverse charisms of the Catholic Church by encountering people from a variety of religious orders.

I have had Dominican professors, Jesuit and Benedictine spiritual directors, and classmates from Franciscan communities. I have always admired the clarity with which they see their charism, the way they understand their identity and mission. For Franciscans, it is about identifying with Christ who is poor. For the Benedictines, it is their faithful commitment to strive for holiness according to St. Benedict’s rule. The Jesuits and Dominicans live the charisms established by their founders, Sts. Ignatius of Loyola and Dominic.

But when it came to diocesan priesthood, I wasn’t sure we had a defined charism or spirituality like other religious orders. At least not until I came across the figure of St. John of Ávila, whom I was first introduced to in my first year of theology by a priest friend, and who would become a source of inspiration.

On March 22, St. John’s Seminary in Camarillo hosted the annual Serra Conference lecture. This year, the talk was dedicated to this 16th-century Spanish priest, known for his zealous discipleship in southern Spain, his contributions to the work to reform the local Church, and his dedication to the renewal of the spiritual life of diocesan priesthood at the time. His contributions were so important that they led Pope Benedict XVI to declare him a Doctor of the Church in 2012.

The lecture was given by Father Carlos Jesus Gallardo, a priest from the Diocese of Cordoba, Spain, who has devoted most of his life to studying St. John. Father Gallardo’s talk focused on three points: the saint’s life, his influence in the Americas, and how he has shaped the diocesan priesthood.

Most of what St. John wrote was addressed to his brother priests, challenging them to live out the dignity of their priesthood. Among the many things that were said that evening, the one I can remember most clearly is his heartfelt prayer: “Lord, give me your heart…” The way I understood it was: “Lord, give me not only your love but teach me how to love as you love, to care for others as you care for me, to pour out myself for others as you have poured your love for us.” 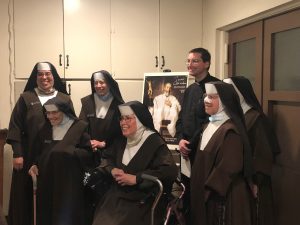 Fr. Gallardo with Carmelite Sisters of the Most Sacred Heart of Los Angeles during the St. John of Avila relic's visit to Alhambra on Wednesday, March 23. (Fr. Gustavo Castillo)

St. John was without a doubt a source of inspiration for all priests and constantly reminded them that they did not have to search elsewhere for a spirituality, nor did they have to invent a charism: both could be found in Christ the Good Shepherd, who gave himself for those who were entrusted to him.

This was something St. John exemplified in his own life and mission, ceaselessly and eloquently communicating the merciful love of God, whether at the pulpit, in the confessional, or through his writings, especially his “Treatise on the Love of God and Treatise On The Priesthood.” According to him, “We ought to know that God is love and He has no other wish than that of being loved.”

For St. John, the priest is the dispenser of that love of God, of the riches and treasures of God’s mercy. It is among the priest’s tasks to act as a bridge between God and humanity, bringing God to his people and taking his people toward God.

St. John was a prophetic figure in his time, a courageous yet loving instrument of God’s love. He reminded priests of their dignity and challenged them to live a life worthy of that dignity. He pointed out to them that they need not search for a spirituality or charism; their charism lies in imitating Christ in his zeal and pastoral charity as well as in their task of interceding on behalf of God’s people — instruments and dispensers of his graces.

This conference reminded me once again that each vocation is particular. God willing, my mission as a diocesan priest will be to have the heart of the Lord, a heart that beats and overflows in love and apostolic zeal. I’m grateful to have St. John of Ávila to show me the way.

Luis Gerardo Peña is a seminarian of the Archdiocese of Los Angeles in formation at St. John’s Seminary in Camarillo.