What LA Catholic schools are taking away from ‘distance learning’

At St. John Bosco High School in Bellflower, the posts on Facebook, Twitter, and Instagram pump up the student body about the “Virtual Spirit Week” activities, with the hashtag “BraveTogether.” It includes “Tik Tok Tuesday” to post best dance moves, and a “Thankful Thursday” to encourage tagging someone who you are thankful for.

At St. Joseph’s Catholic Elementary School in Hawthorne, a Twitter post shows off its “new white board,” an arithmetic lesson on one side of the video screen, and the other side captures students working on the subtraction problems.

At All Souls World Language Catholic School in Alhambra, an Instagram post shows a teacher introducing her dog to her class at the end of a Spanish math lesson.

Since the traditional in-classroom structure was suspended in mid-March in the wake of the coronavirus (COVID-19) pandemic, the pivot to “distance learning” has become the mantra for the Archdiocese of Los Angeles’ Department of Catholic Schools.

The adjustments and trial-and-error for some are smoothing out when it comes to the best ways to educate from a physical distance. But a key discovery for many is how this new normal based in technology and adaptability is not so much about detachment and isolation, but how it has brought more students, teachers, principals, and leaders closer together.

“The grit and perseverance of our parishes continue to represent the best of a Catholic education,” said Paul Escala, the superintendent of Catholic Schools in the Archdiocese of Los Angeles, which includes more than 200 elementary schools and high schools covering more than 78,000 students in LA, Ventura, and Santa Barbara counties.

Escala has also experienced the product of the activation of the Department of Catholic Schools’ Academic Excellence Team that has been sharing best practices with prekindergarten through 12th-grade schools. 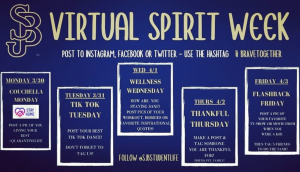 The core values of the Catholic faith are an integral part of how this learning lesson stays beyond just a teachable moment in time.

“Our faith is the essential difference between success and failure, because even if some of our schools are struggling with the transition, not everything is perfect, it’s a belief that we’re guided by a higher calling, and we’re here not just to educate the students but minster to the families,” said Escala.

“The community bands together, when faith is most tested and actualized. Not just during the good times, but also during the hard ones.”

The examples are plentiful.

Lilliam Paetzold, the head of school/president at Notre Dame Academy Schools of Los Angeles, relayed an email that was sent to one of her teachers, Raynelle Duronslet. It was from the mother of a senior who was involved in dance, expressing sadness by the thought the last recital at the high school might not happen now.

“But I have noticed [my daughter] has been spending a lot of time doing dance at home, around her room, the living room, planning and being creative. … It’s so important in these uncertain times that they maintain a goal and purpose. When I see [my daughter] dancing, I see a group of people acting with hope, which is what we all need right now!”

Paetzold credits the Notre Dame Academy pre-K-through-12th-grade schools’ “21st-century mindset” with establishing a tone of what can be done to move forward and advance communication, creativity, and ingenuity in a time like this. It’s finding a balance between screen time and work time, keeping structure as before, but also embracing a new schedule.

“We feel like this experience has to be holistic,” said Paetzold, who has some 600 students on campus, almost split between the co-ed elementary level and the all-girls high school level, with a diverse student body covering more than 40 zipcodes in Southern California.

“In this moment, you don’t need bells and whistles, or a swimming pool or a football stadium, or all the fancy things a school has, or doesn’t have. I think this puts us on the same playing field in many ways.

“A lot of this has brought back a joy of learning. When you get to connect with the teacher on a more human level — they’re not at the front of the class and the student is sitting — there has been a new excitement that’s cool and refreshing and engaging.”

At Notre Dame Academy, for example, it’s as much about how the all-girls swim team connects on a Zoom meeting in full suits, goggles, and swim caps. “The process is what shapes you” read the words on the screen under their multivideo virtual “workout.”

Paetzold, a 1984 Notre Dame Academy graduate who has been at the schools for 10 years since arriving from St. Lawrence of Brindisi in Watts, said the “flip” to this teaching method has been on her vision board since she arrived.

Notre Dame Academy was just named the recipient of the National Catholic Educational Association’s Dr. Karen M. Ristau Innovations Award for furthering the “mission of Catholic education through an innovative program or approach.”

Paetzold was to attend the national conference in Maryland in March to accept the honor, but the event was postponed. 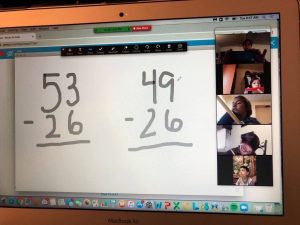 A social media post by St. Joseph's School in Hawthorne shows off its “new white board” during an arithmetic lesson via video conference, with students working on subtraction problems. (Image via Facebook @SJSHAWTHORNE)

Escala said a key tool in the transition has been the archdiocese’s relationship with Sprint in providing cell-driven technology devices that aren’t necessarily dependent on an internet connection.

There are common tools for distance learning with this Generation Z demographic: the Google applications for Classroom, Slides, Docs, G Suite and Hangouts, plus Zoom, Nearpod and YoTeach!

Aaron De Loera, the second-year principal at St. Bernard Catholic Elementary School in Bellflower, with nearly 190 students from pre-K to eighth grade, says “it was fun in a sense going to this new platform and taking on the challenges that came with it, but the community has done very well.

“One of the first victories we’ve experienced is how parents have understood the situation and what they have to undertake, the teachers have been able to take their lessons online and the students have responded. The kids are very self-sufficient in a lot of this.”

De Loera said that support from the Department of Catholic Schools has been key, “working directly with us and offering help from the start with workshops on how to do all this.”

Raquel Cagigas, the principal at the 155-girl San Gabriel Mission High Catholic College Preparatory High School and a 1996 graduate, also teaches AP Psychology and AP Research, and has been able to adjust lesson plans based on new changes in college board requirements.

“It feels that we have been thriving more than just surviving,” said Cagigas. “In times like this, it could be hit-and-miss. Making through this as normal as possible can be important. We have time to pause, pray and talk about how we’ve been able to execute all this. We have also seen our [Associated Student Body] student officers step up in leadership roles to continue with community learning. Education isn’t just about teaching but what you can do with power and responsibility.”

Cagigas also remarked about the success of the counseling resources on campus that have been able to continue planning for next year’s classes with students and “reimagining how to connect” with students, a majority of whom live in inner-city LA and “have found being on campus is a safe place for them.” 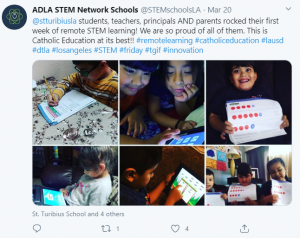 Melody Bueno, the director of activities at San Gabriel Mission High School as well as a math and English teacher, said the remote learning model is challenging her to be a better teacher, while introducing her to technology that she’ll be using with students for years to come.

“My priority is to maintain student participation and engagement, not just have me talk to them while they watch passively. Zoom sessions where students see my face are important because it shows that we are here to support students, and it gives students a sense of familiarity and stability.”

For high school students, the “new normal” of remote learning is in some ways offering a special preparation for the future: Receiving a lesson plan at home at the beginning of the week with a stated goal and then having the next four days to complete assigned tasks mirrors how they will eventually be taking college courses.

Joey Attanasio, a junior hockey player at St. John Bosco, admitted that was one of the upsides of how this distance learning has worked, as well as one other key thing.

“I used to have to get up at 6 a.m. to catch my ride (from Torrance to Bellflower), but now I can get up at 8 for Google Chat, and there are less distractions that allow me to focus more and get my own work done,” the 16-year-old said. “I do miss sports and hanging out with my friends, but that’s the only real downside.”

Attanasio’s younger brother, Jacob, a 12-year-old sixth-grader at American Martyrs Catholic School in Manhattan Beach, said he finds he’s getting his homework done faster, but “instead of calling this ‘home school,’ it feels more like ‘self school.’ I miss my friends, too.”

The added ability for schools in the archdiocese to incorporate prayer has taken on a new significance as well.

Paetzold notes that at Notre Dame Academy, the Sisters of Notre Dame profess “a deep belief in God’s goodness and provident care,” as well as responding to the needs of our time.

“That’s the underlying thing about all this: In a Catholic school you can talk about how God is with you,” said Paetzold. “We will take care of the students’ social and emotional needs. In this moment, social and emotion will trump content any day.”

Escala said he averages a half-dozen Zoom calls a day to keep track of how things are progressing. The unity is something he can’t help but be proud about.

“It’s not lost on me about how we are a big church in a large archdiocese, and we often struggle to be connected even when we’re together,” said Escala. “To see how everyone has rallied over the last three weeks, with enormous pressure and circumstances beyond our control, is overwhelmingly heartening for me. I see our faith transformative in the way we have worked together.

“I see us getting smart and good at the distance-learning platform. We’re learning in real time how this works. We need the best ideas. Maybe this is a new hybrid model for Catholic schools, how we organize social development. When we come out of this, what we gain from this crisis will be a new way of evangelizing.”