COVID-19 restrictions proved an unexpected blessing to the Archdiocese of Los Angeles’ annual novena for healing from abuse, as the online prayer services drew far more participants than in-person liturgies of past years.

One service alone had 850 live views, far exceeding past in-person services, said Heather Banis, the clinical psychologist who serves as victim assistance ministry coordinator. The possibility to pray virtually, it seems, allowed people who are hesitant to spotlight themselves by attendance to participate anonymously. They could also choose to identify themselves and write comments.

“The livestream gives you all the grace and space you need,” Banis said.

“United Together in Prayer – Novena for Child Abuse Prevention and Healing” was livestreamed April 22-30 from eight parishes and St. John Seminary. Every auxiliary bishop in the archdiocese took part, as did all its seminarians.

It included prayers for all victims of child abuse, but the focus was on those abused by Catholic clergy.

Petitions were offered for victims, their families, therapists, Church leaders, teachers, youth ministers and, in particular, for those who died from suicide related to abuse: “May they find eternal peace in the embrace of their loving God.”

Deacon Michael Masteller, who is scheduled to be ordained a priest next month, gave the reflection at the opening night Holy Hour at St. John’s Seminary in Camarillo. He focused on Jesus’ desire to offer healing.

“Jesus was innocent, yet he suffered so he might bring healing, peace and hope to the innocent who suffer,” he said.

Over several years, Masteller had been moved by Banis’ presentations to the seminarians, especially when she had them listen to a man who had been sexually abused by a priest.

“It really helped me move it away from being an issue to being a reality, a personal reality,” he said.

At the same time, he learned how much the archdiocese and the wider Church has done over two decades to put a stop to sexual abuse by clergy, he said.

As he participated in the liturgy, “what moved my heart was feeling the pain of people who have left the Church, who have been pushed away from Christ because of the abuse they suffered – which was out of their control,” Masteller said. “I pray to God in his mercy to give a special path for them to find him again, to find healing and come to find Christ once more.”

On the second night of the novena, Father Juan Ochoa at Christ the King Parish in Hancock Park centered his reflection on the spiritual damage done when the institution someone trusts most betrays him or her.

“How many people have been abused by people for whom they developed trust and respect, leaving them not only to suffer with the terror of the abuse, but then in isolating silence, saying nothing,” he said. They end up “living with the shame and the pains and, at the same time, believing that they are responsible for what happened to them.”

He invited all victims – whether abused in the Church or somewhere else – to find healing in the community of Jesus’ love.

“For those who, even at this moment, may be abused, we gather to pray for you, to be with you and to recognize that healing does not take place on its own,” he said. “We give thanks for the gift of therapy . . . but we also need God’s healing.” 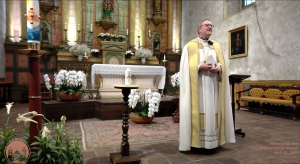 Bishop Robert Barron speaks at the closing prayer service for this year's novena for healing from abuse at Mission Santa Barbara April 30, 2021.

The closing Mass was celebrated by auxiliary Bishop Robert Barron at Mission Santa Barbara. He called abuse by clergy “the devil’s masterpiece” for its efficacy at undermining Church ministry and outreach.

“What we are suffering is just, because of the horrific nature of this crime,” he said.

At the same time, he pointed to the reforms that have all but eradicated new cases. He cited reform movements of centuries past, calling on Catholics to stay in the Church and help it to act like the Church Jesus created it to be.

“It’s during times of crisis that many of the greatest . . . saints have arisen,” Bishop Barron said. Among others, he cited Francis and St. Dominic, who renewed a corrupt and stagnant medieval Church.

“Now is the time for great saints to arise, to speak again the great truths of our faith. And so, we stay and we fight. And above all, we rely on the grace of God as we pray for our church and we pray for those who are still victimized by this terrible crime. And we pray that we might continue to walk the path of discipleship.”