When it comes to giving homilies, you might call Father Jeffrey Harvey, CM, something of an expert.

A nationally recognized preacher, not to mention an experienced pastor, the 54-year-old Vincentian priest’s missionary vocation has taken him from Phoenix to New Orleans and even to the Solomon Islands.

On a recent Saturday in November, it took him to St. Odilia Church in South LA, still recognized as the “Mother Church” for Black Catholics in Los Angeles nearly a century after Bishop John Cantwell designated the house of worship at 5222 Hooper Avenue the “Negro National Church of Los Angeles” in 1926.

“Without God, life is meaningless — a meaningless drama where something seems missing,” said Harvey, preaching from a wooden pulpit adorned with an orange African pattern cloth at the Ninth Annual African American Catholic Ancestral Mass on Nov. 16.

“But with God we’re able to rise from the fatigue of this world and have hope. With God there is hope to rise in the midnight of desperation to the daybreak of dawn.”

“Yes! Yes!” came back from the assembly filling St. Odilia’s.

Most recently, Harvey’s journey has taken him to St. John’s Seminary in Camarillo, where he is wrapping up his first semester teaching homiletics to LA’s next generation of priests.

Harvey said he often thought of the apostles and just how wonderful it must have been to have heard Jesus preaching.

“To be at his feet while the master is preaching,” said Harvey, a look of wonder coming over his face. “Of all the great theologians and scholars, they are never as profound as Jesus himself. He was absolutely awesome. Because he had hope in his teachings. They [Jewish religious leaders] forbade him from preaching in the cities because he was preaching outside of them.

“That’s because he spoke with power. Demons would tremble at the sound of his voice. The winds and waves would become calmer. The dead rose. All because of the preaching of our Lord.”

“What makes a good homily?” Harvey repeated the question in a soft voice during an interview with Angelus News after the Mass.

“First of all, you have to know what kind of people you’re preaching to, what they’ve been through in order to engage them,” he explained.

“I knew I’d be preaching to an African American assembly here at St. Odilia’s. But on weekends, I also fill in at some mostly white parishes. And I wouldn’t deliver the same homily to them. But it would still be breaking open the word of God to them.”

And that brings up the second element he believes makes a good homily: Knowing the Scripture readings for that Sunday, which are set by the Church according to the liturgical year.

He always tells his seminary students, like the freshmen he’s teaching homiletics to at St. John’s, to start reading the Scripture passages the Sunday evening before the next Sunday. And then read the first and second passages, psalm and Gospel again on Monday and throughout the week.

The purpose is to really break open the word of God for the people in the pews, who may have a dozen other things on their mind. But how does a priest know what God wants him to get across in a particular homily?

“Well, we have our readings,” Harvey explained. “Everything is already set for each Sunday. And so we have to take those readings that the Church has in its wisdom given us. We have to read them, pray over them, and ask God to give us the words that we need to preach. And it all flows from the readings.

“That’s why I tell my seminary students, ‘We have to start off in prayer. Just read the readings, and close them up until the next day. Ask God to give you some insights. So you always start with prayer.’ ” 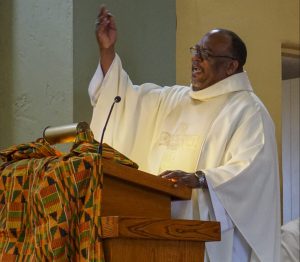 Another thing Harvey tells his students is to use plain language to make sure the folks in the pews understand what they’re hearing. The goal is to be clear. And don’t try to make 10 different points. If people walk out of church with one thing that really hit them during the homily, the preacher has done his job.

Interjecting personal stories into a homily is also a good way to keep people’s attention. During his homily at St. Odilia’s, he told a humorous one about taking dancing lessons with his sisters and wearing purple leotards. It certainly got the churchgoers’ attention, drawing a long laugh from the congregation.

The last thing about giving a good homily seems so obvious but is often overlooked by pastors: sound.

“If people in the church can’t hear what you’re saying, then nothing else matters. You might have some great things to say, but if they can’t hear you it’s all down the drain,” Harvey said.

“That means the pastor has to sit way in the back when preaching is going on. Normally, the priests are in the sacristy or the sanctuary or they’re greeting people outside. They’re not sitting down and listening. That’s one of the things I did when we got a new sound system at St. Vincent de Paul in Phoenix. I just went and sat in a back pew to make sure.”

With a knowing chuckle, he said a lot of things can make a bad homily. When he goes into a new parish, he always asks, “How’s your parish?” The most common reply, he said, is about the preaching.

Harvey, who grew up in Ascension Church (also in South LA), said preaching and teaching are his passions.

“Preaching is very vital,” he said. “And we need all of the priests to be serious about what they’re doing in preaching God’s word. Especially for Catholics. Catholics want good preaching. And they can have it if we study, if we put our heart in it and if we ask God to direct us. It can be done.”

During his homily at St. Odilia, Harvey pointed out how the message of Jesus resonates in a particular way with the African American community, a community that has suffered discrimination, injustice, and barriers to progress in society.

He drew some laughs when he brought up the English nursery rhyme “Humpty Dumpty,” who couldn’t put himself together again after falling off that wall.