A Vatican official praised the Archdiocese of Los Angeles for setting “a high model for the rest of the Church” in its use of digital technology at the 10th annual Catholic Communication Collaboration Conference, commonly known as C3.

Bishop Paul Tighe, secretary of the Pontifical Council for Culture, made the remarks during his keynote address at the Aug. 3 event, which took place virtually for the second straight year due to the COVID-19 pandemic.

“We learn locally and we can share that with different parts of the world,” said Bishop Tighe, a native of Ireland. “Los Angeles has always been a church community of hope for the global Church.”

For participants, the day-long event served as an opportunity to reflect on the lessons of the pandemic and apply them to the future as part of the theme of this year’s event, “What’s Next?”

The question seemed to resonate during Tuesday’s proceedings as much as it did 18 months ago, when the initial COVID-19 outbreak pushed pastors, educators, administrators, parents and children in the Archdiocese of Los Angeles’ schools and parishes into unchartered territory. 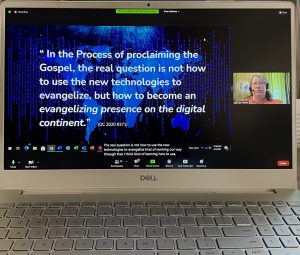 Kay Harter, Master Catechist for the Archdiocese of Los Angeles, during her live presentation Tuesday, Aug. 3 on “Digital Cultural Languages and Tools.”

With another opportunity to re-imagine the most efficient ways to connect with the greatest number of participants, as well as showcasing the technology that could make it happen, C3 offered a hybrid model. The event’s more than 1,600 registered participants had access to 33 live sessions on the first day, spread over three time windows. All were then added to an on-demand menu with a total of 74 sessions accessible through the week until Friday, Aug. 6.

“This year we blended what we have experienced over the last year-and-a-half in the intense learning curve of the pandemic [knowing] we need to collaborate and educate and have resources at the ready all the time,” said Paul Hernandez, the chair of C3 the last three years, in his opening remarks.

In his remarks at the event, Archbishop José H. Gomez told attendees he was “encouraged by the many ways the Church here in Los Angeles is leading the way in using these new media to bring people to a new encounter with Jesus Christ.”

“I think it is clear that digital technology and virtual solutions play an important role in our post-pandemic ministry,” said Archbishop Gomez.

Bishop Tighe, who delivered his keynote nine hours ahead from his office in Rome, said he believes that the expanded use of technology during the pandemic has prompted a cultural transformation that is shaping our identities.

“It’s not just getting technology to the people, it’s enabling communities to stay together,” said Bishop Tighe. “I believe what Los Angeles is doing in reflecting on what this experience was like and what we learned will be hugely important to guide us over the next years.”

C3 officially launched in 2012, a year after about 200 people from a selection of pilot schools and parishes gathered over three days at Loyola Marymount University with the goal of focusing on, identifying, and advising how to integrate new and current technologies and resources in archdiocesan ministries.

C3 got a major boost when mobile network giant Sprint (which has since merged with T-Mobile in 2020) signed on to fund the project under the archdiocese’s Educational Broadband Service (EBS) spectrum, licensed to the archdiocese by the Federal Communications Commission (FCC).

Since then, C3 has become the umbrella for education and ministry technology in the archdiocese, enabling technological logistical information sharing for parishes.

This year’s experience aimed for a more classroom-like setting, with participants able to ask questions in a chat box, activate microphones to share information in break-out sessions, and get resource links from presenters to upgrade the exchange of information. 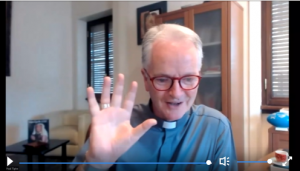 Bishop Paul Tighe, Secretary of the Pontifical Council for Culture, waves goodbye after his keynote address delivered Tuesday live from his office in Rome, nine hours ahead.

Topics ranged from the basics — remote work issues, best practices for digital learning, and a Bible 101 “crash course” in Scripture — to more sophisticated discussions on how to de-stress students, the concept of digital discipleship, and how to we can get into a “mind-shift” about what our world might look like in 2030.

“Yes, some of this can be completely overwhelming,” admitted Andrea Chavez-Kopp, who moderated a discussion about digital discipleship from her home in Virginia, while narrating a Power Point slide showing that out of the 7.83 billion people in the world, 4.66 billion are active internet users and 5.2 billion use mobile phones.

In her presentation titled “The Upside of the Downside: Moving from Transactional to Transformational,” Dayrin Perez, youth ministry coordinator for the Office of Religious Education sought to point out the silver linings of the “horrible situation” that COVID-19 has been for so many.

“What we just experienced will give us a time with pain, loss, suffering, stress, separation from families,” said Perez. “There are millions of stories out there being told of heroism and courage and moving to a transformational mindset.”

Father David Loftus, pastor at Our Lady of Lourdes Church in Northridge, during his talk entitled “Finding Our Character and Grounding Our Hope: A Parish Conversation For Moving Forward,” reminded participants that dealing with a world turned upside-down is nothing new for Catholics.

“When I consider the history of the Church, isn’t transformation what we’ve always done?” he asked.

“In the 21st century, we just never had to think about it until now,” continued Father Loftus. “From the very beginning the Church has had to adapt to local circumstances. Sometimes they allowed us to flourish. Sometimes they almost extinguished the life of the Church. We had to learn in this time the things that were important to us, in terms of who we are and of ‘whose’ we are as a people of faith. We have remained God’s people even in a time of pandemic.”