When it came to following the historic March 25 consecration of the world, especially Russia and Ukraine, by Pope Francis to the Immaculate Heart of the Virgin Mary, the time difference with Rome worked out particularly well for Catholic schools on the West Coast.

For many schools, the timing coincided with weekly school Mass, often held on Friday mornings. At St. Anthony of Padua School in Gardena, pastor Msgr. Sal Pilato led students in the prayer of consecration sent by Pope Francis to bishops and priests after Communion at the school’s 8 a.m. Mass. Afterward, students gathered in the school hall to watch the livestream of the consecration at St. Peter’s Basilica. 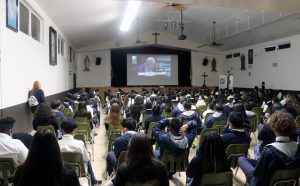 After Mass at St. Anthony of Padua school, students gathered to watch the livestream of the consecration at St. Peter’s Basilica. (Pablo Kay)

At St. Joseph’s School in La Puente, students and staff participated in the consecration before Friday morning Mass, gathering around the school’s outdoor Fátima shrine to pray the rosary and recite the prayer of consecration. Each student left a yellow flower at the foot of the statue of Mary, which is accompanied by statues of the three Portuguese shepherd children who witnessed the Fátima apparitions in 1917.

St. Joseph’s principal Roger Ranney said he was moved by the students’ reverence during the service.

“It was evident our students understood the solemn nature of the prayer service and its special purpose,” he said.

At Christ the King School in Los Angeles, students attended a 9:15 Mass before participating in a candle-lighting ceremony for peace. Students also presented a special mural where they could add their prayers for peace, created in partnership with Scholas Occurrentes USA. As in many other parishes, church bells rang 29 times to mark the number of days since the start of Russia’s invasion of Ukraine on Feb. 24. 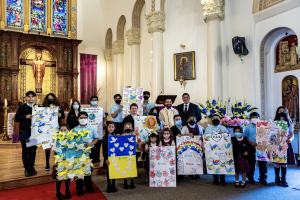 Students at Christ the King School near Hollywood hold up handmade prayer signs to be posted on a special peace mural for Ukraine. (Ron Echual)

“It breaks my heart into a million pieces,” read one of the students’ prayers posted to the mural. “Let the people pray and let Ukraine know we are here to help them out and doing everything we can do.”

At St. Charles Borromeo School in North Hollywood, the consecration was done at the beginning of the school’s previously scheduled Stations of the Cross, also at 9:15 a.m.

“It was a humbling and unifying experience for us to take part in a simultaneous prayer with Catholics around the world,” said principal John E. Genova. “I am proud of our students for the way they led our school community in prayer.”

At All Souls World Language School in Alhambra, some 400 students gathered in the school parking lot Friday morning to pray the consecration. Since the school offers two dual-track immersion programs in Spanish and Mandarin, prayers were recited in English, Spanish, and Mandarin. 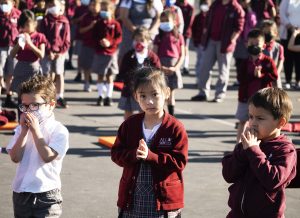 Back at St. Anthony of Padua, the idea of consecrating themselves and their world felt familiar to students. The March 25 consecration fell on the ninth day of their school-wide consecration to Mary, an annual tradition started three years ago and timed to culminate around the feast day of Our Lady of Fátima on May 13.

Such timing, said St. Anthony principal Angela Grey, was “a beautiful coincidence” for her school.

“The ones in junior high really have a closer connection [to the consecration], but everybody understands what’s happening,” said Grey, as students attentively watched the pope’s penance service with help from simultaneous translation on EWTN.

In his homily at the school Mass, Msgr. Pilato explained the historical significance of the pope’s special gesture, which also fell on the solemnity of the Annunciation, and the story of Our Lady of Fátima. A teacher from his time before entering the seminary, he remembers watching the television broadcast of St. Pope John Paul II’s consecration in 1984. But he never imagined he’d be a part of a similar act of consecration years later.

“I always tell the kids that their prayers are much more powerful than those of adults,” he said. 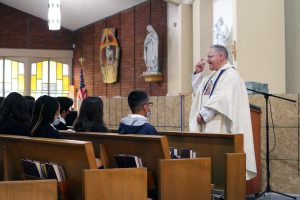 At St. Anthony of Padua School in Gardena, pastor Msgr. Sal Pilato led students in the prayer of consecration sent by Pope Francis to bishops and priests after Communion at the school’s 8 a.m. Mass. (Pablo Kay)

St. Anthony eighth-grader Gianna Rubalcava said she was struck by the text of the pope’s consecration prayer for a world threatened by so much suffering.

Sister Tao Pham, a sister of the Lovers of the Holy Cross Los Angeles and a religion teacher at St. Anthony, noted to her students that Ukraine and Russia are two countries with a historic love for the Blessed Mother.

This act of consecration, she believes, was a powerful reminder of Jesus’ call to love one’s enemies.

“We offer love, we don’t offer war or anything like that,” said Sister Tao. “To be able to invoke our mother is a great gift we can offer to those who might harm us.”