Through fire, California missions remain a refuge for the sacred

On the feast of St. Benedict, Archbishop José H. Gomez stood among the remains of Mission San Gabriel. The embers of the old Californian mission presented him with one more trial, on top of many hardships confronting Los Angeles and the Church from which it derives its name, Our Lady Queen of the Angels.

He thanked the firefighters for their great work and thanked God that no one was hurt, but he also lamented the evil suffered by an active parish of wonderful people of faith.

The archbishop of Los Angeles has long advocated for the Catholic roots of the American experiment. The Catholic faith has been with America from the beginning, and any betrayal of it also betrays the very heart of our nation. The history of California is one of the sources for his arguments. The missions provide a living sign of the hope that holy humanity offers every people, and this same hope lives in the very best of the American dream.

We do not know whether this particular fire was arson. Hopefully this is not the case, but current political powers have promoted vandalizing sacred art for political purposes. So there is reason for suspicion.

The call for political violence has resulted in the destruction of important monuments of our faith heritage throughout California. Nor is it a new thing for activists of different kinds to burn down churches throughout the U.S. In a recent case, a man in Florida crashed his car into a parish church just before Mass, splashed gasoline, and set the building on fire.

The strange way state and local officials relate to churches during the pandemic has not helped: not essential social and spiritual partners with whom to cooperate, but instead nonessential dangers to be kept shut down. When legislatures pass laws aimed at particular practices of faith, as, say, is the case of sacramental confession, it sends a dangerous signal, and violent opportunists have seized upon this reckless messaging.

It is now open season on the Church, even as the Church continues its outreach to the homeless, mentally ill, the displaced, and the dying.

Something about this calls to mind other terrible fires suffered by parishes around the world. Though not itself the result of deliberate action, the terrible accident in Notre Dame in Paris is the most known of these. Only the most attentive might have also noticed that churches across France have been deliberately attacked for political purposes for a few years.

As to the persecution of Christians in China, the West shuts its ears completely even as our brothers and sisters are tortured in camps. Something about the religious hatred and reckless indifference at work in the rest of the world connects with the new hatred of God in America.

Exploited by certain political powers who would seek to displace the role of Christianity to make room for some new utopianism, religious bigotry lays social sins on the Catholic Church. An all too compliant scapegoat, the politically powerful intimidate the Church into this role for their own gain. 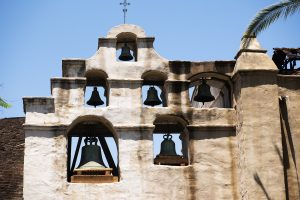 The altar, along with the mission’s bell tower and museum were spared, but the thick adobe walls were blackened. (Victor Alemán/Angelus News)

The holiness to which the Church witnesses is banished from the rest of the community, no longer to be thought of, except in derision. A voice for the most vulnerable is all but muted. Indeed, there are in fact grave social troubles, and the most vulnerable always bear the brunt of these.

Is it actually to solve social ills that religious hatred is promoted? The American equivalent of Maoists teaches that the pathway to a brave new world is built on vilifying all vestiges of the past — including the Christian memory of holy humanity. As taught by the architects of secular Europe, heritage and piety must be sacrificed to usher in fundamental social change.

Make no mistake: This change is not about protecting anyone’s dignity or freedom. It does not lead to spiritual maturity or to any form of human progress. It subverts all that is noble to accommodate the fantasies of the politically powerful. Yet, whatever the future utopia that the powerful envision, sown in anarchy’s burnt soil, it can only reap more nihilistic oppression of the poor.

Mysteriously, attacks on the sacred stir many Catholics to lives of deeper prayer and spiritual renewal. The Church in China continues to grow much more on the persecuted mainland than it ever did in the freedom of Taiwan. Religious movements of young families throughout France continue to grow. Priests in St. Louis gather every night before a public statue of St. Louis to pray with the faithful. Together they witness that this king is not a symbol of oppression but of the justice and holiness that inspired the founding of their city. The same is happening here in California, where prayer services have been held in front of monuments, often defaced, of St. Junípero Serra.

A man who gave up everything, left the comfort of his home to bring the Gospel to the farthest edge of the world, St. Junípero deemed the chain of missions that he founded on earthquake-faulted soil to be a sure ladder to heaven, a pilgrim pathway not unlike the Camino de Santiago.

These missions were not first and foremost buildings. They were visible signs of spiritual realities in which indigenous people might find shelter and make a new beginning in an ever-changing world. Not without untold hardships and many grave mistakes, it is on this spiritual path that California is built.

To this day, the buildings are witness to a faith that offers humanity the only real new start it has ever had, for other beliefs are subject to the changing cycles of culture and history, but this one offers a pathway to a more noble destiny and purpose.

The saint founded these islands of humanity on what was considered the very periphery of the world so that on earth’s most unstable remotest frontier, there might be a sure sign of hope. And so they are today, even as Californians dance on the edge of a shaky precipice, sunbathed white stucco and sandstone shining under the darkest threats to human dignity any people have ever faced at any time in history. For moral and spiritual oppression is far more dehumanizing than any other absolute claim a government might make on its people.

When Spain brought its many terrible social evils, it also endeavored to entrust to the unknown peoples of the world’s edge its greatest treasure: a gift so beautiful and necessary for humanity that many Spaniards gladly suffered hardship and death that those who now live here might enjoy it. El Escorial was built around it, terrible wars were fought to preserve it, and each expensive expedition to America was dedicated to extend it, and so the Catholic faith came to California at great cost. 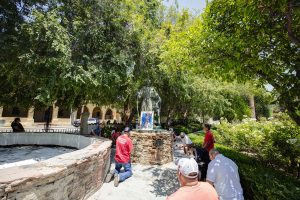 A prayerful crowd gathered around the statue of St. Junípero Serra in front of Mission San Fernando Rey de España June 27, the same day that protesters threatened to deface and even remove the statue. (Victor Alemán/Angelus News)

For many, the missions meant freedom from the violence inherent to both European occupation and pagan culture. Grateful to St. Junípero for this freedom, thousands of indigenous Californians wept at his death and exponentially more raised their families in peace because of his selflessness. That is why some native peoples even see St. Junípero and the Franciscan family as a sign of God’s favor to them. Through the Franciscans, God sent them someone who, as did the Son of God, gladly forsook every comfort in life and embraced every kind of unforeseen hardship to rescue the threatened dignity of the indigenous, and to walk with them through their trials.

Of course, with the societal vilification of the Church and the Christian faith, there is a wholesale return to those same dehumanizing practices now that once plagued the pagan world and infected their European occupiers: open thuggery, sex-trafficking, and all kinds of oppression. Thus, only native voices of righteous indignation and condemnation are permitted, as if the indigenous know nothing of the mercy, the graciousness, or the greatness of Christian piety.

My own conscience, however, rings with memories of great indigenous Christians whose voices, if ignored, can only worsen the plight of those now manipulated by the latest news cycle and political ideologue. As was the case for the Nazis and the Communists, the whole neo-pagan narrative only disadvantages the poor, who must raise their children subjugated to the commercial opportunism of heartless algorithm, hostile atheism, and holistic arrogance. How does a voice of prayer speak into this?

The destruction of Mission San Gabriel has diminished the cultural heritage and spiritual patrimony of California. The faith from which this state is born is increased, not lessened, nonetheless. It is a kind of spiritual rule — the more persecuted, the more the Church lives.

Archbishop Gomez knows this, as did St. Junípero and the Franciscans who came with him. Through the echo of an angel’s greeting, California has received a ladder that cannot be destroyed by any fire, political or ideological. Mission San Gabriel remains a vital part of this great mystery.

Though the visible structures might need constant rebuilding, the spiritual realities that are the missions have endured starvation, abandonment, attacks, and earthquakes. They will also endure the bigotry of our day.

The imperfect Christendom that founded California sank long ago in a sea of secularism. The remnants of its structures remain vulnerable to the next wave of social strife. At the same time, the faith that Christians selflessly sowed into the soil of the world’s edge provides a way up that will last long after any current government is a forgotten memory.

Through their faithfulness to what they received, the faithful of Mission San Gabriel form an island of humanity, a refuge for what is most sacred and true about this frail piece of the Pacific Rim, and through them, anew, tidings of great joy.

Saint of the day: Emygdius