For the second year in a row, thousands of college students joined in the annual SEEK conference from multiple campuses across the globe, hosted by Fellowship of Catholic University Students (FOCUS). 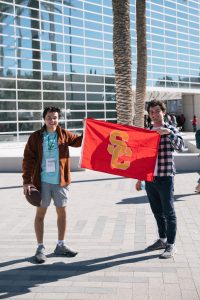 Eddie Valdez, a FOCUS missionary at UCLA, said the weekend “encouraged students to share the Gospel and strive to be saints. The Holy Spirit worked throughout the weekend to open hearts, minds, and souls to the beauty and truth of the Church.”

More than 22,000 people, including clergy, parishioners, college students and FOCUS benefactors, gathered at regional celebrations in 20 countries. The hybrid model of smaller, local gatherings featuring livestreamed talks was implemented last year in response to pandemic restrictions. Before then, the conference was hosted in person at a central location.

The smaller Orange County event had an unexpected blessing for one local participant — he was able to invite his mother to the closing Mass on Sunday, where she attended confession for the first time in almost 40 years. Priests heard more than 600 confessions throughout the weekend.

“This experience of the kind of smaller, regional conferences is really just a microcosm of what we do on a grand scale,” John Zimmer, vice president of apostolic development for FOCUS, told Catholic News Service. “The conferences always have a role of helping people fall more in love with Jesus Christ and then recognizing that they’re called to mission.”