This time of year, Nativity scenes are standard components of almost every church’s Christmas setup. But there is nothing standard about the Nativity scene at Our Lady of Sorrows Church in Santa Barbara, where a dedicated parishioner has, quite literally, lit up the church with his own culturally inspired creation.

Sure, the Holy Family is prominently featured in the area below the Blessed Virgin Mary altar to one side of the sanctuary of the church, a few steps off of State Street in the center of town. Below them, however, spreads a large village that looks more like a 21st-century community than old Bethlehem.

Not only are there streets and houses and shops, but there is a spinning ferris wheel, a musical carousel, an ice rink with skaters skating, and lights galore, soft but plentiful. People, pets, and Christmas trees are scattered about on the “snowy” landscape, reflecting the peace, comfort, and joy that is synonymous with the season.

“Our Nativity scene represents the world, that Christ is for everyone, today, yesterday, and tomorrow,” said Cara Crosetti, parish business manager. “That’s something many of us often forget; we focus on the birth of baby Jesus without recognizing that Christ is always present in our world. And that reality, I think, is very much on display in what Jose has created.”

“Jose” is Jose Fuentes, by day a stone-cutter and finisher, and by night — at least, in recent weeks — an artist with a passion for creating Nativity scenes like those he grew up with in his native Mexico.

“This is how I express my faith in God — through my work on this project,” said Fuentes, who came to the U.S. 20 years ago with his family from Mexico. “I always make Nativity scenes at Christmas, as I did in Mexico every year. And ever since I came to Santa Barbara, I’ve been doing this at home.” 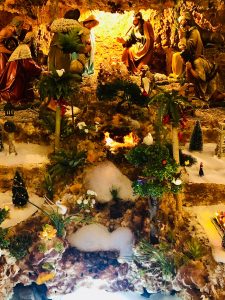 A detail from the Nativity scene at Our Lady of Sorrows. (Father Cesar Magallon)

Fuentes’ passion for Nativity scenes came to the attention of Father Cesar Magallon, Our Lady of Sorrows’ pastor, when he and Father Mario Torrez, associate pastor, visited the Fuentes home two years ago.

“We saw this beautiful Nativity scene in his home, and we were amazed at how creative it was,” said Father Magallon. “I said to Jose, ‘Hey, maybe you could think about doing this at church one day.’ And he was open to the idea.”

Then along came COVID-19, precluding attendance at Mass, much less any sort of elaborate environment. But when Father Magallon saw Jose again recently, he repeated the request.

And for nearly three weeks, Fuentes — aided by his two teenage sons — worked from 5 p.m. until almost midnight each night, after a day at work, building the Nativity scene from an assortment of materials, including wood, paper, and spray foam as well as tiny lights and two water features.

The finished product is reminiscent of Nativity scenes found in other countries, including Mexico, said Father Magallon, a native of Uruapan, Michoacán, 260 miles west of Mexico City.

“Where I come from, these scenes are all over because all people have different ways of expressing their faith,” he explained. “But here, people are taken by such creativity that really brings the worlds of yesterday and today together.”

Christ’s presence in the world for all time — a point made clearly at the start of the Easter Vigil liturgy as the Easter candle is lit — is a theme that Crosetti, an RCIA catechist at the 3,000-family parish, tries to get across in her weekly sessions with catechumens who are being initiated into the Catholic faith.

In fact, “I am leading a group meeting on this very topic, and part of that session will include a ‘field trip’ from the hall to the Nativity scene in the church,” she told Angelus.

And after so long of a period with limited access to inside-the-church worship, parishioners and visitors alike are expected to make field trips of their own to get a peek at Fuentes’ one-of-a-kind creation at Our Lady of Sorrows, whose own roots trace to St. Junípero Serra’s celebration of Mass on the site of what became the Presidio Chapel in the early 1780s.

“I believe Jose is expressing not only his own artistic genius,” said Father Magallon, “but his deep faith in Jesus who is with us always.”