Pope Francis has appointed an LA priest and renowned legal scholar to serve as a judge on the highest appeals court in the Catholic Church.

The Vatican announced April 25 that Msgr. Laurence “Larry” Spiteri will be a prelate auditor of the Roman Rota. The Roman Rota has a history dating back to the 12th century and today deals mostly with marriage annulment cases, but also ones related to matters like inheritances.

The 71-year-old priest told Angelus he was “shocked” by the appointment and reluctant to accept it. But after years of working in marriage tribunals (starting in Los Angeles, and later in places like Las Vegas, Rome, and Naples), he is a first-hand witness that the mission of the Roman Rota is primarily “pastoral,” and not merely juridical. And that, he says, makes all the difference.

“The Church doesn't walk away from you because something failed, but offers justice and an opportunity to heal,” he said over the phone Monday. 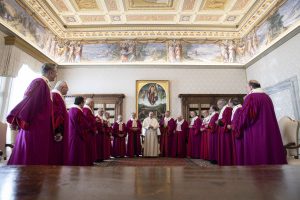 Pope Francis is pictured with members of the Tribunal of the Roman Rota during an audience at the Vatican Jan. 27, 2022. The Vatican court deals mainly with appeals in marriage annulment cases. (CNS photo/Vatican Media)

A native of Malta whose family immigrated to the U.S. and settled in Arcadia when he was a child, Msgr. Spiteri was ordained a priest for the Archdiocese of Los Angeles in 1978 before eventually being called to Rome by St. Pope John Paul II to work in the Vatican’s Apostolic Library’s legal department.

Msgr. Spiteri brings a seemingly endless resume to his new position. He holds four doctorates, has published 92 books and numerous articles on subjects ranging from canon and international law, Church history, theology, psychology, and even poetry. A polyglot, he was written in English, Italian, Portuguese, Spanish, German, and Maltese.

The pope’s appointment means that Msgr. Spiteri will have to resign as a judge on other Church courts, but will continue to work in his current roles at the Vatican’s Apostolic Library, Apostolic Archives, and Congregation for the Causes of the Saints.

Msgr. Spiteri will be the first judge from California to serve on the Roman Rota and its only current member from the U.S. He will take his oath of office on Friday, May 6, at the Vatican.

In a statement provided to Angelus, Los Angeles Archbishop José H. Gomez offered his congratulations, calling Msgr. Spiteri’s appointment “a fine tribute to his years of faithful service to the universal Church.”

“I wish him all God’s blessings in this important role,” he said.