That’s the number of eviction lawsuits landlords filed between 2010 and 2018 in Los Angeles Superior Court, according to a report released last summer by Public Counsel, a pro-bono law firm, and the UCLA School of Law.

It’s a staggering number from “Priced Out, Pushed Out, Locked Out,” which looked at data from a cross-section of the Southland — 88 cities in unincorporated Los Angeles County — and found that 56% of local renters are “rent burdened,” spending at least 30% of their income on rent. It also found that nearly one-third of these renters are “severely rent burdened,” paying more than half of their income every month on rent.

But the report ultimately points to an even grimmer reality for Southern Californians: too many are just one unforeseen life event away — a family member losing a job, an illness, a car breaking down, for example — from ending up on the streets.

“It would be naive to ignore the connection between evictions and homelessness,” observed Nisha Vyas, director of Public Counsel’s homeless prevention law project.

Just ask Angelenos staying in shelters, living in their vehicles, or bedding on street sidewalks. In Los Angeles County last year, the homeless count found there were some 59,000 homeless persons, a 12% increase from the year before and a 52% jump since 2010.

As “Priced Out” somberly states, eviction “can result in the loss of jobs, schools, and other community assets” for tenants. “These sacrifices can cause and exacerbate a host of mental and physical ailments, including anxiety, depression, substance abuse, poor educational attainment, and even suicide.”

It’s a crisis on a scale that aid agencies like St. Vincent de Paul Los Angeles have never seen before. But how much can they do? 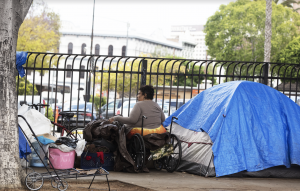 “We’re seeing more and more,” he told Angelus News in a recent interview. “Our hotline is flooded with requests for help. If you do the math, two or even three people living in an apartment making minimum wage don’t make enough to pay rent here. Or they make enough to just pay the rent and nothing else.”

But it’s not only the visibly poor who can’t afford housing in Los Angeles today. Garcia said it goes back to the “Great Recession” in 2008. That’s when the Catholic agency started seeing working- and middle-class renters being priced out of their homes.

“It went down for a while,” he explained. “But this last year, and a couple years before, rental requests have really gone up.”

St. Vincent de Paul Los Angeles offers two connected rental assistance programs. One is through the overriding Los Angeles council, which can pay up to $1,500. A person has to have a legitimate serious excuse for missing rent payments, something like a medical emergency or the breadwinners losing their jobs. Recipients also must show they have a plan for meeting next month’s rent.

Some 200 ongoing “conferences of charity” exist at parishes throughout the Archdiocese of Los Angeles with more than 2,000 members in total. Calls coming into the central council headquarters can be referred to a “parish conference” nearby. Local members make home visits to better assess the person’s or family’s needs. That may include paying off utility bills, but also providing food, clothing, furniture, and other necessities.

When the need is really great, like for missed rent payments, members of other St. Vincent de Paul parish conferences and the Los Angeles counsel can get involved to share their resources and work toward “eviction prevention.”

“Before an actual eviction, conference members can often work with landlords because many will trust a Catholic agency like St. Vincent de Paul,” explained Garcia.

The head of St. Vincent de Paul Los Angeles expects his agency to keep working with families facing eviction, despite even with more affordable housing being built. “Efforts by Los Angeles City and County are years away from being completed.

“And even when all this affordable housing finally gets built, it’s not nearly enough,” Garcia added. “So we’ll keep helping individuals and especially families facing eviction as much as we can.”

The possibility of becoming homeless for Los Angeles County residents has become all too real in recent years.

Some 22,000 rent-controlled properties have been taken off the market since 2001. The metropolitan area of Los Angeles needs more than a half-million affordable housing units to meet the growing need, according to the U.S. Department of Housing and Urban Development (HUD).

Today, 1 in 3 renters pay more than half of their income for housing, and an estimated 600,000 residents spend a whopping 90%.

One challenge is that while the economy in Los Angeles has improved in recent years, corporate owners — very often forming “limited partnerships” — have taken advantage of the law, according to experts in the field. It gives them the right to vacate a newly bought apartment building, then renew units while driving up the rent.

The founder of the Los Angeles Community Action Network reported that wages simply have not kept up with these rising rents.

“Housing costs and the cost of living are far outpacing what people are earning,” pointed out Pete White. Median rental prices for a one-bedroom apartment in Los Angeles have jumped 84% from 2010 to 2018. But median wages during those years have only gone up 11%.

So it’s no surprise that Los Angeles ranks the fifth most expensive city for renters in the nation, according to a new report from price tracker Zumper.com.

Seniors on fixed incomes are probably the most vulnerable to eviction because of California’s growing rents. While 29% of all renters in the state spent more than half of their income on housing, for those 65 to 79 years old the percentage was 35%. And that increased to 42% for renters 80 years old and older in 2016, according to the Harvard Joint Center for Housing Studies.

Caseworker Jazmin Burgos was talking to Bruce Hackman, executive director of Catholic Charities of Los Angeles’ Long Beach Community Services Center, at his desk on a Tuesday afternoon last month. The colleagues were discussing something heavy on both their minds: the increase last year of people asking for help with evictions in this working-class and low-income Long Beach community their agency serves.

“If they need legal assistance, we are able to provide these families with a referral to Legal Aid,” said Hackman. “They are working with us to prevent these families from becoming homeless. They’re mostly single mothers raising children who haven’t been evicted yet, but are in the process.”

Burgos explained how the center has a grant for an eviction prevention program and dedicates Mondays and Wednesdays to dealing with these cases. Some 16 to 20 people a week come in for the service, in addition to the dozens of phone calls inquiring about the program.

“For a lot of people, this is their last stop. We get the difficult cases. I mean, if we can’t do something, they’re homeless. So we really try to help them. Sometimes we can, and that’s great,” Hackman said.

“But there’s another side to this that Jazmin knows: families who already have been evicted,” he added. “And they have two strikes against them. When they’re applying for another apartment, the landlord does a credit check, sees they were evicted, and won’t rent to them.” 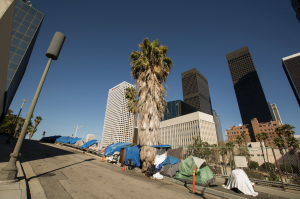 Homeless encampments line the streets of downtown Los Angeles. The last 10 years have seen more than 500,000 court-ordered evictions and an estimated 52% rise in homelessness in Los Angeles County, according to a new study. (Victor Alemán)

In that case, Burgos just starts calling landlords from a list she keeps. Some the center has worked with before will give the evicted family a second chance. But many won’t, so she just keeps calling.

“It would scare anybody to be evicted,” said Hackman. “They put a sign on the door with red letters. But what we do is we keep giving our people a little hope that this is going to work out. But we don’t do magic. Sometimes it may not work. But we go on trying.”

One of the initiatives that the eviction crisis in Los Angeles has given rise to is St. Vincent de Paul’s Project Independence, which has helped tenants like 36-year-old Dana and her family stave off eviction.

Fearing for their lives, Dana, her three children, and her mother-in-law fled an outbreak of violence in their home country in South America and arrived in California about two years ago.

With no credit history, she had to pay six-months rent upfront for an apartment in Pasadena, which she managed thanks to help from a GoFundMe online account. Still, there was hardly enough money left to feed her family.

By the time the half-year ended, the now-36-year-old mother was desperate. Could she find a shelter that would take the family? Would they end up on the street?

On top of all that, her husband was killed a few months after they fled. She was still traumatized by his death and the sudden move.

“And I would always pray to God to help us. For me, it’s like some angels that God sent us to be with us and help,” she said through an interpreter and flowing tears during an interview with Angelus News, accompanied by the St. Vincent de Paul Los Angeles parish conference leaders who had helped her.

“When I was in my country and I had a good job and was able to take care of myself and my children, you never imagine that you will be alone and have to provide for them. It’s very scary,” she confided.

Next to her at the large conference table sat Eugenia Furukawa, a past president and current St. Vincent de Paul conference member at St. Andrew Church in Pasadena.

“In the beginning for six months, we helped her with food, mostly from our pantry here at St. Andrew, clothing, utilities,” she explained from across the table. “But the big thing was she could not pay her rent.”

Realizing it would take months, if not years, to get the family stabilized, the conference’s leaders entered the family into the charitable organization’s Project Independence. The program has helped Dana cover about 75% of her $1,400 monthly rent.

The conference was also able to walk Dana through how to find a job and get a driver’s license, and even found her a car to use that had been donated to St. Andrew, all advantages she’ll need to eventually become independent.

Robert Wyatt of Assumption of the Blessed Virgin Mary Parish conference in Pasadena said that her time in Project Independence has been extended to cover January, February, and March of 2020.