Of the many ways in which the COVID-19 pandemic has impacted the Catholic Church, one has gone largely unnoticed.

As the pandemic picked up steam in March 2020, millions of Catholics began to “attend” Mass via the internet or television. Instead of receiving Communion in person, they might make what is called a “spiritual communion” instead — a prayer asking Jesus to come into their souls.

Thus, churches were largely empty for months, leading to a drastic drop in the use of Communion wafers. Parishes were left with bags of unused hosts, so there was no need to receive further shipments for the time being.

In many cases, these hosts, also known as altar breads, are baked and sold by religious communities. Sales of such wafers provide financial support for the communities, which are mostly sisters or nuns.

With orders canceled, these communities soon began to feel the pinch.

“Before the pandemic, we had about 200 customers,” said Sister Anna Tran, OCD, who oversees altar bread production at the Carmel of St. Teresa in Alhambra, California, a community of cloistered discalced Carmelite nuns.

“We shipped approximately 250,000 hosts to parishes, hospitals, schools, and religious communities per week. Once the pandemic hit, by April 2020, all of the orders from our customers were canceled,” she said. “The customers who did order were very minimal (about 10%), so probably about 90% of our customers either cut down or canceled their order completely.” 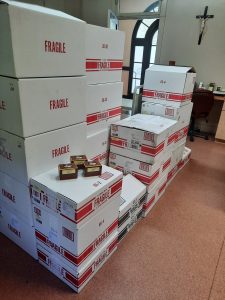 The Carmel of St. Teresa in Alhambra, California, lost nearly 90% of customers during the pandemic, leaving them with boxes of unused altar breads.

Mother Brenda Marie Schroeder, OCD., prioress of the Carmel of St. Teresa, said that after a year “we had to throw away all our supply of small altar breads. It was starting to get buggy.” She said that large hosts were still in demand because priests were still celebrating Mass, albeit privately. But not the small ones.

She wrote recently to customers, who are throughout the Archdiocese of Los Angeles, as well as parts of Nevada and Arizona, expressing the hope that they would resume their orders when public Masses resume.

In the meantime, a local supporter of the nuns, Jennifer Nolan, offered to help, because she realized what an impact the loss of business would have on the Carmel.

“I thought I could set up a monthly donation base,” said Nolan, founder of Catholic Polytechnic University. “Hillsdale College (a private school in Michigan) has thousands of people who give $10 a month. That’s what these nuns need — an army of people.”

So Nolan set up a monthly donation option on the nuns’ website. The change soon made a difference. “Just in one week we got 27 donors for them,” Nolan said. “It’s so hard not to know: ‘Are we going to have enough money for food next month?’ If they have 100 donors giving $20 a month, they’ll have an amount they know they can depend on.”

But in Valley of Our Lady’s case, the disruption also had a benefit. “We gained 57 new customers during the pandemic — many of them specifically for our priest hosts,” the nun said. “Many priests prefer our breads, whose quality and design are unique in the market. Prior to the pandemic we were unable to accept new customers.”

The nuns will now become a distributor for Cavanagh Altar Bread, a secular producer based in Rhode Island. The sisters will continue producing their own low-gluten hosts, however. They were the first to produce such hosts since the Vatican approved them for Catholics who suffer from celiac sprue.

In spite of the disruption, Benedictine Sister Ruth Elaine Starman, OSB, said the Missouri abbey is in “pretty good shape” financially, since benefactors have stepped up in the time of crisis. “It’s been beautiful to see how people still want to support us,” she said.

Sister Ruth and others said that, more than their own situation, they are more concerned about lay Catholics and their sacramental life at this time. “I’m hoping that more and more people will decide to go back to church and partake of the sacraments,” Sister Ruth said. “That’s been the biggest tragedy — not that our sales were poor, but that people weren’t able to participate in the sacraments at all. It’s just not the same, watching on TV.”

For Mother Brenda Maria, of the Carmel in Alhambra, the pandemic and the shutdown “made us really united with the people. We feel more at one with them, because of everything we’ve gone through together.”

To donate to the Carmel of St. Teresa in Alhambra, visit CarmelTeresa.org/donation

This article originally appeared May 12 on Aleteia.org. It has been edited for brevity.

John Burger is a writer at Aleteia and the author of a forthcoming book from Our Sunday Visitor about the leader of the Ukrainian Greek Catholic Church.