Order of Malta, Carmelites get creative to deliver ‘care for the caregivers’ in LA

In the early weeks of the coronavirus (COVID-19) pandemic, the Carmelite Sisters of the Most Sacred Heart of Los Angeles learned that senior citizens were at a heightened risk of contracting the deadly virus. The sisters thought instantly of the residents at their Santa Teresita nursing home and assisted living facility in Duarte, and realized what they were being called to do: move in with them.

“It was the ultimate sacrifice,” said Mike Psomas, president of the Los Angeles chapter of the Order of Malta, a 900-year-old lay religious order of the Catholic Church.

When Psomas and other members of the Order of Malta heard about the sisters’ commitment, they knew they wanted to help. But with strict citywide stay-at-home orders and social distancing measures in place, they had to get creative.

“How do you structure a program to protect the people providing the program and the people that are the recipients of the program?” Psomas asked. “It probably took us a month to figure it out.”

As part of the Order of Malta’s mission of caring for the sick and the poor, the organization was already running a hygiene kit delivery program for homeless shelters in LA. Each month, a truck delivered a pallet of supplies to the members of the order, who broke them down and reassembled them into personal packages for delivery. They realized they could use the same system for the Carmelite sisters.

“We were already doing this hygiene kit program, so the idea arose that we could model it like that,” Psomas said. “It’s already approved by our medical director, and we can make kits, we can give people something to do.”

Over Mother’s Day weekend, that’s precisely what happened. Thirteen families received supplies like gummy bears, granola bars, and hand creams and worked in an assembly-line fashion to put together care packages for the sisters, more than 300 in total. 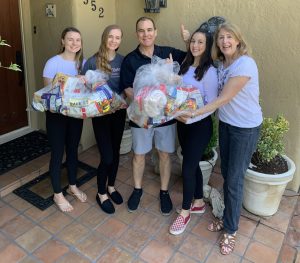 Rich Grimes, a knight of the Order of Malta, assembled care packages for the Carmelites with his family over Mother's Day weekend. (Courtesy Order of Malta/ADLA)

“The Carmelites are so wonderful,” said Rich Grimes, a knight of the Order of Malta whose family assembled several of the kits. “Our hope is to put a smile on their faces and a recognition in their minds that they’re not alone, and that we’re beaming our prayers and support for what they do and how they put themselves at risk for others.”

The idea, which the order named “Operation Gratitude,” could not have come at a more critical time. As the city inches toward reopening, many experts are expressing increasing concern about the responders on the frontlines of the virus. Doctors, nurses, chaplains, and nuns are witnessing illness and death at unprecedented levels, and for many of these caregivers, even small acts of kindness and encouragement can make a big difference.

“We just went through Nurse’s Week, which is normally a time to celebrate nurses in a lot of different ways,” said Arthur “Tri” Fritz, a knight of the order who also assembled kits with his family. “To be able to recognize nurses, caregivers, and first responders of all sorts is really crucial, because they’re under the most pressure right now.”

In addition to snacks and lotions, each care package contained a hand-written note and a copy of “Prayer for the Health Workers in the Time of the Coronavirus Pandemic,” written by Los Angeles Auxiliary Bishop Edward Clark.

“Bless the hands of those who care for the victims of this disease,” the prayer reads. “Reward the generosity of their commitment to those who suffer.” 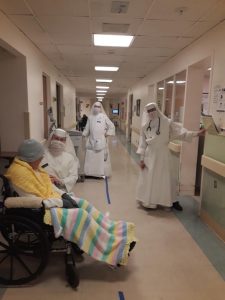 After learning that senior citizens were at a heightened risk of contracting the coronavirus (COVID-19), several sisters decided to quarantine with their patients in their nursing and assisted living facilities in Duarte. (Courtesy Order of Malta/ADLA)

Because the senior population at Santa Teresita is at such a high risk of contracting the coronavirus, it was decided that the gift kits would themselves be quarantined for a minimum of five days. The sisters at Sacred Heart House in Alhambra — the “motherhouse” of the Carmelites — agreed to accept the gifts and keep them until they are cleared for human contact, at which point they will distribute them to the sisters who moved in with their patients.

But these additional steps aren’t just a necessary precaution in the time of the pandemic; they’re  something the sisters view as yet another act of love for the people they care for. The delivery on May 12 was a joyful occasion for everyone involved.

“I can feel my heart enlivening,” said Sister Mary Scholastica as the Malta Mobile Unit pulled into the leafy driveway. Before accepting the packages, she and several other sisters honored the order with a rendition of “Rejoice in the Lord,” their smiles peeking out from beneath their masks as they stood in formation across the lawn.

“The great evil in this virus is that it isolates us from each other,” said Sister Isabel, one of the nuns who lives at Sacred Heart House, “but if we keep love in our hearts, then evil can never win.” 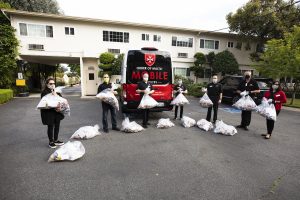 In order to protect the recipients of their gifts, the Order of Malta used a creative, multistep system to assemble and distribute care packages while maintaining strict social distancing protocols. (Victor Alemán)

While the gifts await distribution, the Carmelites are focused on yet another method of offering hope: They’ve used their time in quarantine to set up a livestream of their prayer services. The response has been overwhelmingly positive, and people from all over the world have reached out to express their gratitude and appreciation.

“It speaks a lot to the hunger people have,” said Sister Scholastica. “This situation is almost reminding people that life is passing, and there’s another life we’re heading for.”

That the pandemic has left many people frightened, confused, and in search of meaning is a challenge the Carmelite sisters feel uniquely prepared to handle. As spiritual (and often medical) caregivers, they see it as their job to help not only those suffering from the virus, but also their families as they move through with what Sister Scholastica calls “the walk from this life to the next.”

“It’s hard, but not all hard things are bad,” she said.

The decision of some sisters to quarantine with their patients is both an illustration of their exceptional commitment and an embodiment of their faith. In addition to small sacrifices, like the opportunity to go for walks around the neighborhood, the sisters who chose to move into Santa Teresita have taken on even more duties: they sent the regular staff home in order to avoid the risk of any contamination from people coming and going. 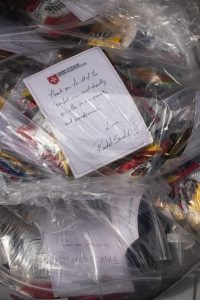 In addition to snacks and lotions, each care package contained a prayer and a hand-written note. (Victor Alemán)

The opportunity to provide these sisters with care packages, and involve dozens of families in the process, is something Psomas and the other members of the Order of Malta feel acutely grateful for.

“I just hope they know that people do care for them, and that the outside world cares for them and recognizes them,” Fritz said. “They’re not alone. People love them, God loves them.”

As the pandemic enters its fourth month, all parties involved with Operation Gratitude are looking ahead to other ways they can be of service. And while assisting the sick and the poor has never been so challenging, or required so much creativity, it makes the work that much more meaningful.

“It’s happening all over the world,” said Sister Isabel. “You see different people reaching out in different ways, and then you know: there’s God. You can see how his love can never be beaten by sickness or by death.”

Hayley Smith is a Los Angeles-based reporter with a master’s degree in journalism from USC Annenberg. You can follow her on Twitter @whereishayley.