Order of Malta brings holiday cheer to those in need

In the predawn hours of Thanksgiving morning, as record-breaking rain pounds downtown Los Angeles, a soft light is shining from a small building on Hope Street. Inside the St. Francis Center, volunteers are bustling with activity as they set tables, carve turkeys, and slice pumpkin pie. After all, they are about to serve 240 guests a proper Thanksgiving feast.

Outside, in front of the building’s entrance, nursing students from Mount St. Mary’s University are huddled under pop-up tents as they prepare dozens of flu vaccines donated by Huntington Hospital. Despite the rain, the students are smiling, chatting, and eager to care for today’s guests.

Their “guests” are, primarily, those who live on the streets of Los Angeles, many of whom had endured the night in frigid, storm-soaked tents. Hot coffee is flowing, and Christmas music is playing, as arrivals are seated around dining tables.

“We like to give our guests the dignity and respect of having a meal served to them,” said Marianne Kulikov, executive director of the center. “For many, this is the only time today someone will look them in the eye.” 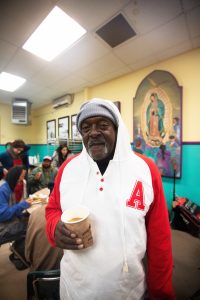 The annual Thanksgiving event is one of dozens of free hot meals sponsored, organized, and served by members of the Sovereign Order of Malta, Los Angeles. Normally, the order’s “Knights” and “Dames” do the cooking, too, but culinary students from Los Angeles Trade Tech College prepare and cook the Thanksgiving meal.

“We want to make our guests feel welcome, like they are coming into our home,” said David Smith, a Knight of Malta who manages the breakfast service at the center. “Our goal is to spark joy in every person we encounter today.”

Such is the spirit of the order, a Catholic lay religious order that, since its founding nine centuries ago, has become one of the largest humanitarian organizations in the world. Here in Los Angeles, more than 225 volunteers participate in hundreds of order-led missions, helping “the poorest of the poor” through self-funded medical, social, and humanitarian works.

“To serve everyone as Our Lord, especially the sick and the poor, that is our charism,” said Michael Psomas, president of the order’s Los Angeles location.

“Around the world, the order treats neglected diseases such as leprosy, tuberculosis, malaria, HIV/AIDS, Ebola, and malnutrition,” said Psomas. “These are largely diseases of poverty which, left unchecked, become epidemics.” 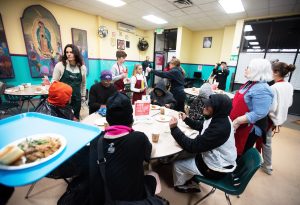 “We see our Lord in the faces and hearts of this homeless population, and we will not ignore him,” he added.

In keeping with their commitment to aid the most vulnerable, the order recently conducted a study of local emergency departments to examine the unmet health needs of the homeless. Results indicated that flu vaccines, among other efforts, could significantly impact the prevention of illness and promote public health.

While free flu vaccines are offered at area pharmacies and clinics, including the Order of Malta’s Medical Clinic in downtown Los Angeles, Psomas said such facilities can be difficult for some to access due to a lack of transportation. Therefore, the order is developing new strategies to meet the needy where they are. 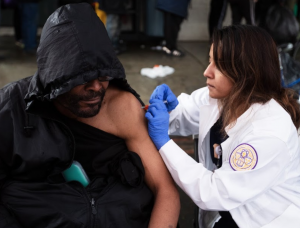 A student nurse from Mount St. Mary's University gives a free flu vaccine as part of the Order of Malta's efforts to address the health needs of the homeless population. (Victor Alemán)

Today’s Thanksgiving meal/flu vaccine outreach exemplifies this effort; in fact, the event marked the debut of the order’s new, 18-foot Mobile Service Unit, which will expand its service capabilities.

“The Mobile Service Unit will broaden our reach to geographic areas we aren’t already serving,” said Psomas. “We will partner with service providers such as nursing and dental schools, mobile shower providers, and others to bring these services to the neediest.”

The ability to create strategic partnerships is one of the order’s strengths, said Michael Grace, President of the Order of Malta, Western Association. “We bring communities together by acting as the conduit between the services and the needs,” he said. “Many of our members are business owners, lawyers, and entrepreneurs, so we manage things pretty well.”

As president of the order’s western region, Grace travels extensively throughout the western United States. He said the homeless epidemic in Los Angeles is especially complex and difficult to impact.

“Los Angeles is more spread out, so it is harder to see the immensity of the needs and address them,” he said. Drug addiction, job loss, mental illness, immigration, and the cost of living are just a few of the issues contributing to the crisis, he added.

Grace hopes the mobile unit will be the first of a fleet of vehicles in Los Angeles and beyond that will allow the order to increase its hands-on service to the sick and the poor. “Our goal is to put our Catholic faith in action so we let people know that they matter,” he said. 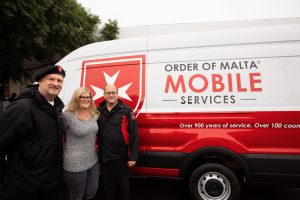 Mary, a Thanksgiving Day guest who recently lost her home after fleeing domestic violence, expressed her deep appreciation for the dozens of volunteers who worked so hard to make her Thanksgiving meal possible.

“You can just feel the dedication in the room,” she said as she enjoyed a slice of pie with her tablemates. “It just feels good in here, like being part of a family.”